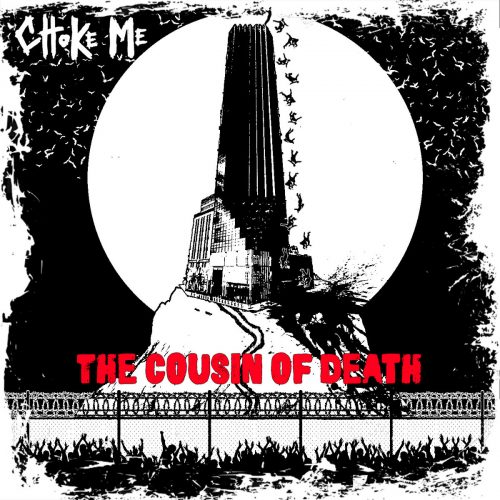 (In this review DGR praises the new record by Los Angeles-based Choke Me, which was released in June by Riot Ready Records.)

Speaking of releases that have fallen firmly in the category of “have listened to a ton since its sliding across my proverbial desk”, L.A’s Choke Me and their album The Cousin Of Death – released  in late June via Riot Ready Records – is the latest candidate to build itself a very comfortable nest in that pile.

There’s a few reasons for this: One is that this disc is fast. The band dub themselves “fastcore”, so at the very least this should be an easily attainable goal, and The Cousin of Death clocks in at about twenty-five minutes over twelve songs. The second is that The Cousin Of Death is cathartic. It nails the feeling of lashing out within the first few songs and retains that sort of ferocity for the entirety of its run time, the dual vocal assault provided by its bassist and guitarist amplifying that effect.

Third, whether intentional or something that just popped up during the songwriting sessions, nearly every song here has some sort of flash point where the group shift from comfortable death and grind riffs into full on blasting hell, as if every song seeks to light itself on fire and be fully immolated by its ending. That moment where the tempo accelerates into full speed is so much fun that even though it happens over and over throughout The Cousin Of Death proves that Choke Me have really gripped on to something.

Finally, I have a soft spot for just about any release that contains as much bile within it as a song like “You Aren’t Special” does.

Much like Napalm Death‘s recent release Throes Of Joy In The Jaws Of Defeatism, Choke Me‘s The Cousin Of Death gains a lot of its strength by the power of the pit riff. While I would hold that it’s probably horseshit that there’s nothing new under the sun – in the same way one could philosophically argue with oneself in the wheels within wheels within wheels way about whether they truly know anything until their face collapses and they resemble a puckered asshole – I have adhered to the view that a lot of music stands on the shoulders of giants. And so we often find influences piled on top of influences on top of influences, and as such, develop a musical language that defines a particular genre.

This is the sort of unspoken calculus that tends to run through a person’s head when dissecting a song, to see the death metal, the black metal, the grind, the sneering punk ‘fuck you attitude’, and so on, that might be manifested within it. It’s because we recognize these things and their usage (or overusage depending on whatever strain may be popular at the moment) that we can pin down and play with certain genres musically.

Though the Choke Me crew may use the term ‘fastcore’ as one of their shared-language genre choices, you can easily notice the powerviolence strain, the sort of plug-and-play grind aspect, and the loving usage of the aforementioned pit-riffage. It’s not often you get songs that feel like they’re being partially steered by the drummer, but alas, when drummer Nate Williams decides that ‘it’s blasting time’ then the Choke Me cohorts are more than happy to go along for the ride.

The Cousin Of Death ends up as an album that has a ton of highlight moments. The aforementioned “You Aren’t Special” arrives after an already impressive assault that has the band giving you no room to breathe – honestly, the fact that it opens on a semi-slow grooving riff for a bit instead of the immediacy of the way the previous three begin is a startling change – and finds itself part of an exclusive club of songs that manage to clear the two-minute mark. “You Aren’t Special” is where the first really heavy death metal drilling occurs all the way up to its ending ‘Fuck You’. “Lost In Time” is an early demonstration of the vocal weaponry available to bassist Rachel Lightsey and guitarist Wesley Richards, the two shifting between highs and lows with surgical accuracy. The high snarls remain fierce throughout and the lows that tend to follow are often musical body blows, the two teaming up throughout The Cousin Of Death to kick ass.

Of course, it becomes too difficult to pick out specific highlights when you have a disc purpose=built to be lethal with its every move. The run of “Bleed For Something” to “Death By Noise” is just one voracious segment after another, built around the three-plus-minute “On the Watch” – the only over three-minute song. You have a track like “Every Part” that starts at one hundred and basically never lets up from there, effectively grabbing the listeners to toss them around like rag dolls. “Death By Noise” emerges equally mean after the epic of “On The Watch” has brutalized you before it.

In fact, as is often the case, it takes longer sometimes to try and summarize why a specific song’s method of ass-kicking works than it does for the song to wrap itself up. You notice it less with The Cousin of Death because nearly every song bleeds into the next one, and that includes the super-raw high screams at the ending of “On The Watch” spilling right over into that previously mentioned opening of “Death By Noise”.

Does it stop afterwards? Not even close, because even though you’re maybe five minutes from the end you still have a handful of songs to get blasted through. “Useful Idiot” was one of the early ones that really stood out, partially because of the way the song seems to shift more than the others – meaning it goes through three or four motions rather than what becomes the traditional one, two, asskicking steps – and also because of its closing drum segment, which seems to have been mixed so that it feels like you’ve gone through a physical fight with your speakers by its ending. Then the band wrap the whole affair up with one of The Cousin Of Death‘s more angular grooves in “Kill The Gods”, which only takes about thirty-seconds of its minute-and-nine run time before it turns into a snarling beast itself.

Thus, The Cousin Of Death starts out nicer than it ends, with a somewhat catchy drum and vocal interplay during “Collective Upheaval” and then ending in the sonic destruction of everything the band has hitting all at once to close out “Kill The Gods”.

If you’ve been hunting for some new sonic immolation this year and haven’t somehow stumbled upon The Cousin Of Death on your own, allow me to check in from the grind corner of the site and recommend that you don’t sleep on this one. Choke Me hybridize a handful of styles for the singular purpose of blowing it all up by the end of each song. They get by on mosh-riff and circle-pit segments until it’s time to blast it all to dust and start the whole show over again. Of all the groups out there, they may be one of the bands most singularly made for 2020, channeling a whole lot of frustration into twenty-plus minutes of musical fire that loops around so perfectly that it kind of becomes a default go-to when you just want something incredibly and legitimately angry for a while.

Choke Me do get by on sheer force of tempo alone for a bit of The Cousin Of Death, but they also tie so much of it together that it leaps past what might otherwise be another “seeming to emerge from the ether fully formed and just as ready to collapse” powerviolence project. It is an impressive showing and definitely a good reason to keep an eye on the Choke Me crew for things in the future, assuming they don’t take their own advice during “Lost Time” and burn it all to the ground.