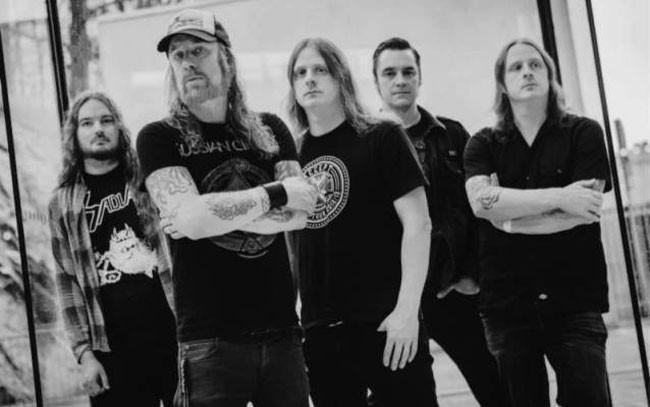 (In this post we present BadWolf’s interview with Tomas Lindberg of Lock Up, Disfear, and of course At the Gates, whose comeback album At War With Reality is headed our way in October)

“We still have a sense of urgency.”

That’s what Thomas “Tompa” Lindberg, vocalist of Swedish death metal legends At The Gates told me in between vocal takes as he called No Clean Singing from the studio. Now that At The Gates have finally released the cover art for their upcoming album At War With Reality, their first in 19 years, Lindberg is ready to talk—about finding his screaming voice, his political views, and the magical realist literature that has informed his new work.

So, you’re in the studio right now?

Very well. All the drum tracks are totally done, and guitar tone is set and Anders has done the long song. We’re going to do guitars on one song, then I’m going to do vocals, because we do the whole setup so I can alternate so I don’t burn out the voice. You know, we’re going to have the first song written, really, finished today.

It’s good that you’re taking care of your voice, because I saw you at MDF and I have no idea how you can do what you do for an entire hour.

Me neither. Sometimes, life is a bit of a struggle, but it’s intense live because then no one can really . . . you can’t rewind and listen to it again. Well, you can on YouTube. In the studio, you need to be perfect 100%, all the time. END_OF_DOCUMENT_TOKEN_TO_BE_REPLACED 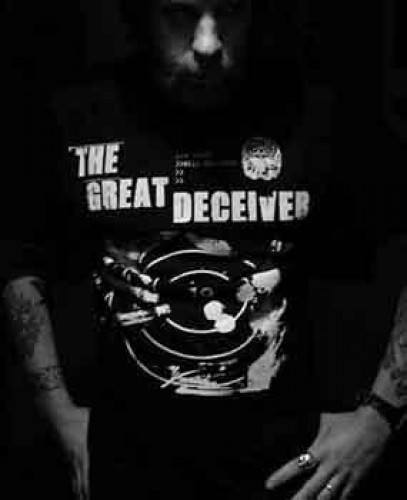 Our UK contributor Andy Synn returns with another edition of The Synn Report.

Hello everyone. For those of you who enjoyed my last column, I’m back again with another band recommended and dissected – this time it’s the turn of THE GREAT DECEIVER.

The band have been active since the late 1990’s and feature in their ranks two particularly famous men from the Swedish metal scene. Whilst you may well recognise the name Tomas Lindberg (vocals) quite easily, you may not be aware that guitarist Kristian Wåhlin is also known by the name “Necrolord” and has famously produced cover art for many of metal’s elite, from Dissection, At The Gates and Emperor, to newer bands such as The Black Dahlia Murder and Becoming The Archetype.

With a musical foundation in both the Swedish hardcore and melodic death metal scenes, coupled with an intense fascination for the moody post-punk atmospheres of Joy Division (of whom vocalist Tomas Lindberg has claimed to be an avowed fan), the sound of The Great Deceiver is difficult to precisely pigeon-hole.

Whilst the guitars have a distinctly metal edge to them, the song structures and tempos lend themselves more towards the hardcore-leaning listener, albeit coupled with a distinctly odd use of twisted melody. The use of heavy tremolo-pedal distortion on the guitar leads and ringing chords is perhaps the most distinctive and consistent motif throughout the band’s work, on a par with the distinctive vocal delivery of Mr Tomas Lindberg himself. (more after the jump, including sample tracks from the band’s discography) END_OF_DOCUMENT_TOKEN_TO_BE_REPLACED

[EDITOR’S NOTE: Today we have another album review from our guest contributor Andy Synn about the brand new album from a band near and dear to our own hearts . . .The Crown. Back in July, we hyperventilated about the band’s release of a song from the then-forthcoming album, and provided a brief history of the band (that post is here). Now, the album is here, and so is Andy’s review. ]

Do you like metal? Do you specifically like metal that is fast, heavy and so aggressive you’re actually slightly afraid to touch the cd with your bare hands?

If the answer is yes, stop reading this review. You don’t need to know any more. Simply get up and go buy the new album by The Crown. You won’t be disappointed.

Doomsday King is a masterpiece of wild fury and calculated aggression. Blurring the lines between razor-sharp thrash and full-speed death metal, the 5 members of The Crown (now including new vocalist Jonas Stålhammar) have all brought their ‘A’ game back to the table with this one. The ominous tolling bell that heralds the start of title-track “Doomsday King” immediately brings to mind the darker tonality of “Crowned Unholy”, before shifting into the band’s trademarked full-speed assault.

Immediately, the vocals of Stålhammar put to rest any misgivings I might have had about replacing Johan Lindstrand as his high-energy delivery, whilst being highly reminiscent of elements of both his predecessors (Lindstrand and Tomas Lindberg), is noticeably darker and perhaps even a shred more aggressive than either.  (more after the jump, including a track . . .) END_OF_DOCUMENT_TOKEN_TO_BE_REPLACED