As you black metalists out there well know, Gaahl is one of the more notorious figures in a fairly notorious genre. During his ten-year stretch with Norwegian black metal band Gorgoroth, he was imprisoned for assault in Norway in 2002, and then imprisoned for a second nine-month stint in 2006 for allegedly assaulting and torturing a man for six hours while collecting his blood into a cup and threatening to make him drink it. (read more after the jump . . .)

And then there was the infamous 2004 concert in Krakow, Poland, that featured impaled sheep’s heads, satanic symbols, and a mock crucifixion performed by naked models doused in blood.

Poland isn’t the kind of place where you want to stage that kind of entertainment. Poland has laws that make it a crime to engage in conduct offensive to people’s religious beliefs. (More about that tomorrow in Part 2 of this post.) And that sheep’s head thing suggested there might have been some cruelty to animals too

So, there was a police investigation, but no charges were filed, apparently because the band convinced the authorities they weren’t Poles and didn’t know what they were doing was illegal.

Then, in 2005, Gaahl drew some further attention to himself by saying this in a 2005 documentary film about Norwegian black metal:

“Church burnings are, of course, a thing that I support one hundred percent. It should have been done much more, and will be done much more in the future. We have to remove every trace from what Christianity, and the semitic roots, have to offer this world.”

Wait, wait — there’s more. In October 2007, Gaahl and Gorgoroth’s bassist King ov Hell tried to kick founding member Infernus out of the band and take the Gorgoroth name for themselves.

That led to what? What do you think? A cage fight with axes? Nope. It led to litigation. And in 2009 the Oslo City District Court ruled for Infernus and decided that Gaahl and King ov Hell had excluded themselves from the band. In layman’s terms, instead of fucking Infernus, they had fucked themselves. 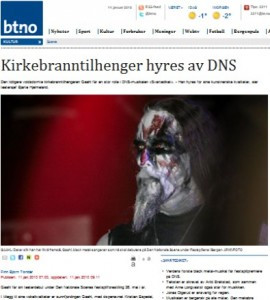 That whole church-burning thing has surfaced again this week in a weird context (at least it seems pretty fucking weird to me, in an ironic sort of way). There’s going to be a first-ever black metal musical (Svartediket) staged in May at an annual international music and cultural festival held in Bergen, Norway. And it’s going to be staged at one of Norway’s oldest and most renowned theaters.

And guess who’s joined the cast of the musical? Yep, you guessed it: Gaahl! Show tunes anyone?

Word of all this just hit the Norwegian press, and it’s causing a bit of a front-page stir, particularly because Gaahl decided to re-up on his church burning pronouncements in an interview during the last week:

“Christianity has no place in this country. As long as the church has the power it has and supports oppression, we sholudn’t give the church any sympathy. Therefore I don’t think it’s wrong if it (church burning) happens again. The symbolic value of burning down churches is important.”

Really? I can certainly understand the perspective that says organized religion (or even unorganized religion) is abusive and oppressive, has caused lots of human suffering over many centuries, has consistently provided a vehicle for some people to dictate the thoughts and actions of others, etc., etc.

But if you take Gaahl at all seriously (and I’m really not sure I do), he seems to have overlooked the fact that religion doesn’t live in the church. It lives in the mind.

I tend to think that even if religions had never existed, human beings would have found other tools and pretexts for manipulating, enslaving, abusing, and destroying each other — and in fact we have. But that’s not my real point (and I hear you saying, “There’s a point? We thought you’d never get to it!”).

My point is that you can’t burn ideas. Burning churches, synagogues, mosques, and even people won’t destroy ideas or beliefs, even really bad ones. The only way to combat bad ideas or destructive beliefs is with better ideas. Unfortunately, that’s a lot harder than putting the torch to the symbols of what you detest.

But this is a two-way street. There’s another side to this coin. [Insert further metaphors.] But enough for today. We’ll get to the other side of the coin/street tomorrow in Part 2 of this post. 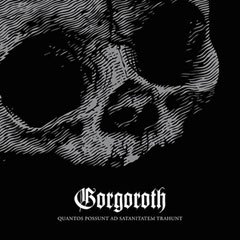 In the meantime, how about a musical interlude? With the release last fall of Gorgoroth’s latest album, Quantos Possunt ad Satanitatem Trahunt, old Infernus proved that he didn’t need Gaahl or King to continue turning out ass-kicking black metal. Stream a little taste of licorice from QPAST: