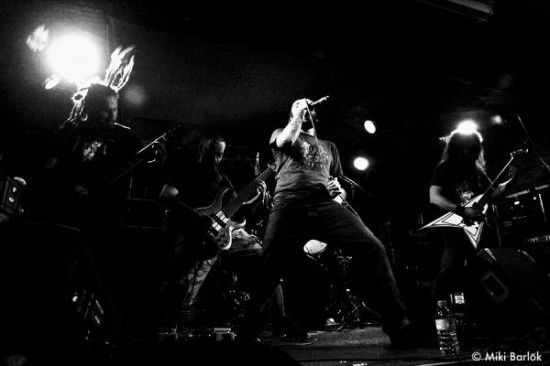 Near the end of last year, we wrote a feature on math-metal bands that included a short write-up about a Greek band called Tardive Dyskinesia and their new album, The Sea of See Through Skins. Here’s part of what we said:

The band’s 2009 release on Coroner Records, The Sea of See Through Skins, is a fast-paced, infectious barrage of technically sophisticated music played with genuine skill. Yes, you’ll find the abrupt tempo changes and complex time signatures associated with math metal, but the band manages to thread grooves and melody throughout that blazing tapestry. Never boring and quite addictive. These dudes deserve your attention. I wish to hell Greece weren’t so far away — I’d love to see ‘em rip it up on stage.

Our wishes have been granted — sort of. We still haven’t made it to Europe to see their see-through skins in person, and they haven’t made it to Seattle, but Tardive Dyskinesia has just posted a good-quality video of a live performance at the Jammin.G Festival on May 15 in Athens.

If you like the kind of progressive, techy, math-metally, death metal that fires the synapses over on the left side of your brain, and you don’t know about this band, well now’s a good chance to check ’em out.  (after the jump . . .)

Without further ado, here’s Tardive Dyskinesia performing “No One Cares” at the Jammin.G Festival in May:

While we’re on the subject of Tardive Dyskinesia, we might as well put up their official video for another jammin’ song from Sea of See Through Skins. Man, do I like that album!