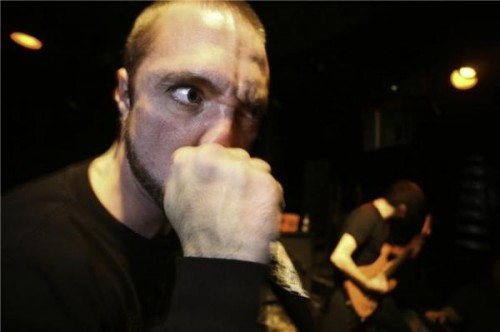 Shit, we might as well just surrender the day to deathcore (not counting my goofy MYSPAZZ post). As punishing breakdowns go, that clip we put up earlier today from Thy Art Is Murder is pretty satisfying, if you can get past the foam-at-the-mouth-and-belch-blood vid accompaniment — or maybe you’ll greet that as a plus factor.

But now we’ve just stumbled across a newly minted, almost freshly unwrapped official goodie from our Seattle homeboys I Declare War performing “Federal Death Alliance” from their new album Malevolence — which my man IntoTheDarkness gushed about in our review here.

And no, we still don’t have any more light to shed on the rumored departure of IDW’s frontman Jonathan Huber, except it definitely is true that he’s not playing with the band on the current tour and Molotov Solution‘s Nick Arthur is standing in. We’re still hoping for more news.  The vid is after the jump. It’s murderous . . .

If you’re an epileptic, or easily disturbed by sudden movements, or you’re not a fan of hard riffing and harder breakdowns combined with intestinally deep gutturals, don’t watch this. Otherwise, enjoy:

8 Responses to “MORE BREAKDOWNS ANYONE?”