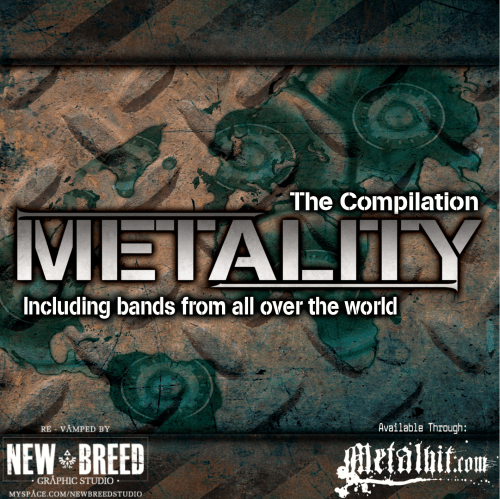 Metality.net is a metal blog run by a dude named iRoar from Cairo, Egypt. We first came across it when we were doing research for our series about Metal From North Africa (the first installment of which you can find here). It’s a very slick site, and it’s also a doorway to metal from parts of the world that aren’t uppermost on the radar screen for yokels from Seattle like us.

But the main reason we’re telling you about Metality today is that iRoar has done an amazingly beneficent thing for metalheads worldwide. He has put together a compilation of some truly stupendous metal, apparently with the official approval of all the bands involved — and he has made it available for free download.

The occasion for this comp is the celebration of his 1000th post. And we would like to wish him a very happy 1000th birthday, with best wishes for many thousands of birthdays to come.

As for that comp he put together, it really is a global collective. It includes bands (28 of them, to be precise) from Europe, India, the U.S., South America, and the Middle East/Gulf States region.

Among the band are some we know and really dig — Nervecell (U.A.E.), Norther (Finland), Demonic Resurrection (India), Scarab (Egypt), CiLiCe (Netherlands), Empyreon (U.S.), and Mantric (Norway) — and many we discovered for the first time through this compilation.

After the jump, you can see the whole list, you can stream samples of every song, and we’ll give you a link for the free download.

There are also these 3 bonus tracks available on the “download” version of the album:

Metality has made all the songs available for individual free download at Metalhit.com.  Or you can download the entire compilation in two parts, plus a file of all the album art, at the same site (which is at this location).

This comp includes some amazingly good metal from a lot of bands that are worth discovering if you don’t know about them. We highly recommend it.

Here’s the ReverbNation widget with samples of all the songs available for streaming: