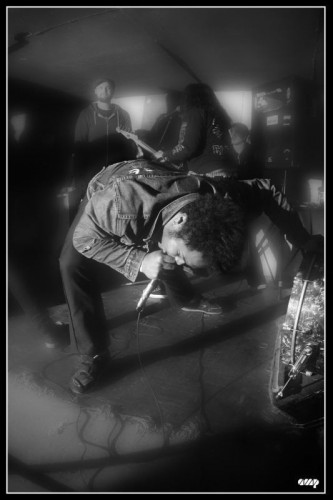 Just after 5:30 a.m. this morning (Monday), Makh Daniels, the vocalist of Early Graves, lost his life in a highway accident as the members of Early Graves and The Funeral Pyre were driving from Eugene, Oregon, to their next tour stop in Reno. You can read the details in the KTVL.com story after the jump.

I don’t know what to say. I didn’t know Makh Daniels, but I feel ridiculously depressed. I wrote about Early Graves’ music here, and about The Funeral Pyre here. I meant to see both of them when they played Seattle over the weekend, but found myself out of town.

So all I really know about Makh Daniels is the music that he helped to make, and the fact that he was young and talented. I don’t really know, but I would guess that the survivors of this accident from Early Graves and The Funeral Pyre are in rotten shape emotionally, and based on the news story after the jump, some of them were physically injured too.

I don’t think there’s any value in trying to draw lessons from this, because there is no lesson. Pointless deaths happen every day, and there is no rhyme or reason. They are all tragic. They are all fucked up. They are all part of life. Doesn’t make it any easier. Not even a little bit.

CENTRAL POINT, Ore. — A van carrying nine members of two California-based “death metal” bands lost control and crashed on Interstate 5 in Central Point when the driver fell asleep, killing one band’s vocalist and injuring two others just after 5:30 AM Monday.

Oregon State Police say the van, pulling a trailer, was carrying members of two death metal bands to California when it crashed in the southbound lane between the Central Point and Blackwell Road exits. OSP reported the band had just played an outdoor concert in Eugene on Sunday.

Survivors of the crash told KTVL that the van was transporting the two bands Early Graves, of San Francisco, and The Funeral Pyre, of La Habra, Calif., a Los Angeles suburb. The Funeral Pyre’s MySpace page described their music as “melodic black/death metal.”

OSP reports that the van’s driver, Justin H. Garcia, 24, Fresno, Calif., reportedly fell asleep and lost control of the van. Early Graves vocalist Makh (Matikeef) P. Daniels, 28, from Pacifica, Calif., was ejected from a rear cargo area where he and two others were resting. Daniels was pronounced dead at the scene by responding medics.

Garcia, a guitarist for The Funeral Pyre, and passenger Tyler S. Jensen, 21, from Livermore, Calif., (guitarist for Early Graves) were transported by ambulance to Rogue Valley Medical Center for treatment of non-life threatening injuries. Jensen was in the cargo area with Daniels and a third uninjured passenger identified as John S. Strachan, 26, from Long Beach, Calif., a member of The Funeral Pyre.