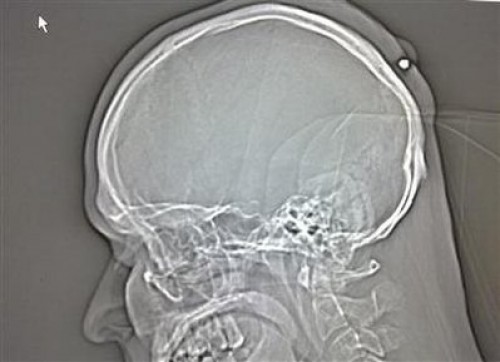 Can you tell that we like alliteration? The last “That’s Metal!” post was subtitled “The Bull, Boobs, and Beer Edition”. Maybe next time we’ll move on to the C’s, or backwards to the A’s. Or not.

Yes, here we are again, having crept forth with trepidation from our comfy informational cocoon to see what might be happening in the outer world — the world inhabited by people who don’t listen to metal and instead blow themselves and others to smithereens, sodomize the planet, debate the wisdom of government regulation as if it were a brand new subject, hang on the every word of vapid celebrities, and so on, ad nauseum. You know the world we’re talking about: the one we live in.

This is why, to the greatest extent possible, we try to get our news only from metal blogs. But every now and then, we have to wade through the festering putridity of “hard news” in order to find those little nuggets of life that make us say, “Fuck! That’s metal!”, even though it’s not music. And life never fails to reward our searching.

Today, we have news items about people who get shot in the head and don’t realize it (for five years), a testicle-cooking contest, and a dog with a cast-iron stomach. Of course, we’re including our typically tasteless commentary, plus musical accompaniment.

Also, it occurred to us that our musical accompaniment should precede the stories, instead of being lumped together at the end, as we’ve been doing.  ‘Cause if you listen to music after you’ve finished reading, it’s not really “accompaniment,” is it? This is typical. We usually have these kinds of revelations after the train has left the station. And is long out of sight.  (more after the jump . . .)

Our first story comes to us from Germany. It’s yet another example of the anesthetizing effect of alcohol in mass quantities. Not long ago, we featured a story about a dude who passed out after finishing off goblets of margaritas the size of goldfish bowls, only to wake up and notice that his dog had chewed off his big toe. This next item is the bookend to that one. But first, some music to accompany your reading (from those Finnish swamplords, Kalmah). Fucking great song, btw.

BERLIN (Reuters) – A Polish man living in Germany went about his business for about five years without noticing he had been shot in the head because he was drunk when it happened. Police in the western city of Bochum said on Tuesday doctors found a .22 caliber bullet in the back of his head after the 35-year-old went to have what he thought was a cyst removed. 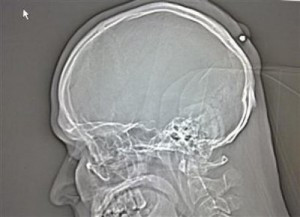 Well, pluck me like a chicken. That’s pretty fucking metal. Usually, people who get shot in the head notice it pretty damned quick. Or at least it seems that way. I’ve never been shot in the head, so I really wouldn’t know. Unless I was shot in the head when I was really drunk.  Wonder if this dude felt anything at all when it happened?

Presented with the 5.6mm projectile, the man recalled he had received a blow to the head around midnight at a New Year’s party “in 2004 or 2005,” but had forgotten about it because he had been “very drunk,” a police spokesman said.

“He told us he remembered having a sore head, but that he wasn’t really one for going to the doctor,” the spokesman said.

Yeah, what do doctors know anyway? You get a blow to the head, and some fucking doctor would probably tell you that you’d been shot, just to run up his fee. Total bullshit.

The wound later healed around the bullet and it was not until the man decided to have the lump examined due to recurring pains that the discovery was made.

Police said they were not treating the incident as suspicious as the bullet might have got lodged in the man’s head when a reveler fired a gun in celebration.

“It may have been a shot fired up in the air which entered his head on the way down,” the spokesman said.

So, the dude isn’t completely opposed to medical care. He just waited until it really, really started hurting — about five years later. He’d probably been self-medicating all that time and finally ran out of vodka money. You can tell the police really don’t give a shit about this. We don’t really give a shit about this either — except it is fucking metal. 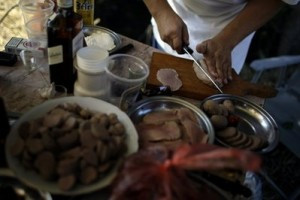 Our next item comes to us from Serbia, where “chefs” trek up into the mountains for an unusual kind of cook-off. The headline below says it all. And now, your musical accompaniment, courtesy of Julie Christmas and her mates.  Fucking great song, btw.

Made Out of Babies: Cooker

OZREM, Serbia – In a remote Serbian mountain village, they’re cooking up delicacies to make your mouth water — or your stomach churn.

Well, geld me like a racehorse. More proof that people will eat anything, even when they’re not on camera in an episode of Jackass. I guess this is metal food, but personally, I think I’d prefer the kind of hamburgers we wrote about over the weekend.

On the other hand, I’ve never eaten an ostrich testicle. At least not that I remember. I wonder if they’d make you want to put your head in the sand, or hump a female ostrich.

“This festival is all about fun, food and bravery,” said Ljubomir Erovic, the Serbian chef and testicles gourmand specialist who organizes the bizarre cooking festival and has published a testicle cookery book. 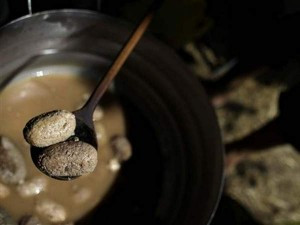 Bravery? I’m having a hard time swallowing that. Chewing isn’t usually considered an act of bravery. In this case, maybe some lunacy or at least cretinism is involved. But bravery?

I’ll tell you what would be brave: having to chase down a kangaroo or bull and eat its testicles while still attached. I have a feeling Chef Erovic bought his testicles in the testicle market. I wonder if his cookbook is a big seller in Serbia. I wonder why people would eat this shit.

The food — politely called “white kidneys” in Serbian — is believed to be rich in testosterone. In the Balkans, it is considered to help men’s libido.

Ahhh, I get it now. It’s all about the male libido. Some men will do anything for libido enhancement. In Serbia, I guess some of them just need a big helping of boar scrotum to perform in the sack. Here in the U.S., they just take a couple billion dollars a year worth of pharmaceuticals instead.

“The bulls’ testicles are the best, goulash style,” said last year’s winner Zoltan Levai, stirring a metal pot heated by a wood fire and filled with vegetables and large testicles that he said were provided from a state-run slaughter house.

The festival — which includes dishes like testicle pizza and testicles in bechamel sauce flavored with a variety of herbs found in the region.

This is almost too much information. I’ll never think about goulash the same way again. I am thinking about ordering a testicle pizza the next time I call Domino’s. I wonder if I could get some sphincter-flavored breaksticks to go with it. And I was right about these dudes buying their ingredients at the testicle market. When you’re right, you’re right.

Our final item comes to us from The City of Angels, where they apparently raise a hardy breed of canine pets — and where people apparently buy “pet insurance”. For your musical accompaniment, how about some music from Liverpool’s Short Sharp Shock? 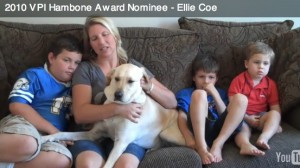 LOS ANGELES (Reuters) – A Labrador that ate a beehive containing pesticides and thousands of dead bees won an award on Monday that recognized the most unusual pet health insurance claim in the United States.

Well, core me like an apple. That’s a fucking metal dog for damned sure. Of course, she’s not a very smart dog. Eating dirt would have been better than eating a pesticide-infused beehive filled with dead bees. On the other hand, I’ve never eaten dead bees laced with pesticide. At least, not that I know of, but as we’ve learned today, alcohol dulls the memory. Maybe there was some honey in there. Or maybe bees have testicles? I wonder what other pets this dog beat in the competition.

Ellie, who fully recovered from her encounter with the beehive in southern California, beat a border collie that ran through a window to get at a mailman, and a terrier that bit a chainsaw.

Fuck, that’s a serious competition! You can understand better now why it would take dead-bee eating to win this baby. Wonder what Ellie got for placing first?

She won a bronze trophy in the shape of a ham, and basket of toys and doggie treats.

The winner was announced on Monday by the Veterinary Pet Insurance Co (VPI) and selected from a dozen pets nationwide.

“Ellie may be a young dog, but she’s already managed to eat everything from wooden toy train tracks to laptop computer keys,” said the VPI. “So the beehive in the backyard was just another culinary adventure for this insatiable pooch.” 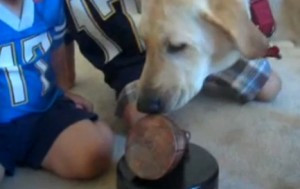 That’s it? A fucking bronze trophy, some toys, and doggie treats that are probably made out of testicles? This is a dog that eats poisoned bees, train tracks, and computer keys. The least they could have done was give her a gift basket of human toes. And what the fuck is she supposed to do with a bronze trophy? Other than eat it, of course.

Personally, I think there’s something fishy about this story. I think Ellie’s owners have been starving her in an effort to cash in on the pet insurance, but she continues to foil their nefarious scheme by eating anything and everything that will fit in her mouth, even if it isn’t anything anyone would consider food.

And you know what that is? It’s fucking metal, that’s what.