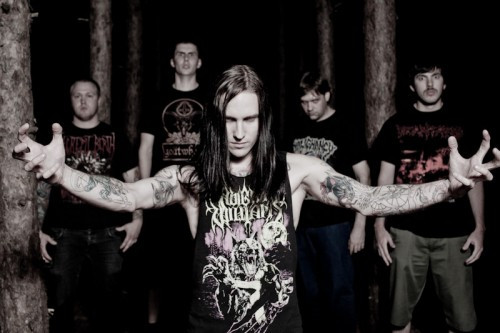 Now you have an idea of what Immersed inflicts. It’s consuming and cathartic and it leaves little room for breath.  (more after the jump , including an Immersed song. . .) 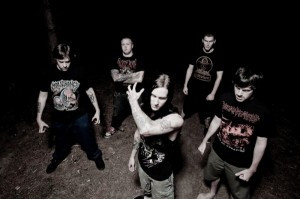 Immersed plays the kind of fast-paced technical death metal that the aforementioned Fleshgod Apocalypse and Decapitated churn out. Like those bands, Immersed hasn’t sacrificed song structure or groove or melody in order to demonstrate their technical chops. Instead, they integrate all those qualities into a cohesive whole.

The production quality on the album is absolutely top-shelf, affording great clarity in the sound of each instrument. You’ll notice immediately the prominence of Stefan Kushneriuk’s drums in the mix. They’re powerful, loud, and insanely fast. They account for much of the explosive power in the songs, and when they periodically hit the hammer strokes in sync with Gareth Allix’s energetic bass, it’s irresistibly convulsive.

As fast and tight as the rhythm section is, guitarists Mike Chambers and Stephan Meloche are their match, and more. They generate staccato riffs galore, darting and flashing like aural strobes, spraying an intricate array of rhythms and tones across the sonic landscape. For good measure, they sometimes render the melodies in tremolo chords (as on the title track and “Ruthless Transgression”) or clean guitar leads and solos (as in “Transparent Monstrosities”, “Desolate Wanderings”, or “Howling From the Grave”). 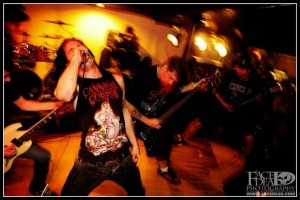 With all this technical prowess vividly on display, the vocals could either enhance or sink the enterprise. Fortunately, Mark Phillips is unusually good. His delivery fully occupies three distinct and quite different vocal styles — cavernously deep growls that open wide like a bottomless abyss yet are amazingly intelligible; black-metal style acidic rasps; and the kind of screaming that would rival victims of the Inquisition in extremity — and he bolts from one end of the range to another seamlessly. It’s also very cool when those vocals styles are double-tracked so that they blast your eardrums in harmony.

Lyrically, The Ire of Creation is loaded with references to the works of H.P. Lovecraft and includes quotations from The Hound, The Dunwich Horror, and Call of Cthulhu. In fact, the album cover is an original painting by Ottawa tattoo artist/death metal guitarist Rob Chambers of a Lovecraft character named Abdul Alhazred (or at least his corpse).

Are there any shortcomings in this album? It depends on what you’re after.

If you’re looking for changes of pace or variety in the songs, you won’t find much of that. There is simply no let-up on this album. It’s fast and riveting from beginning to end. Stylistically, the songs are also all quite similar; there are no dramatic differences between them, though each one is a kick in the ass to hear. 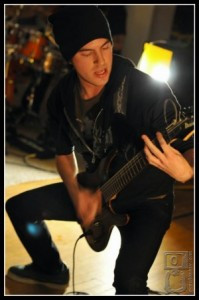 On the other hand, if you feel the need to flash-fry that mushy brain of yours into a hard-edged crispiness, The Ire of Creation will do quite nicely.

Immersed isn’t yet playing in the league of bands like those two we mentioned at the outset, or other tech-death innovators like Decrepit Birth, Obscura, and Origin. But for a debut album, The Ire of Creation is well ahead of the curve.

All the ingredients are here. Every one of the band members is technically excellent and they clearly have sound instincts in the song-writing department. In our most humble opinion, what they need, to elevate themselves to the next level, is to find the comfort and confidence to experiment, to branch out, to occasionally surprise their listeners with the unexpected.

In the meantime, though, we’re plenty happy with The Ire of Creation. From start to finish, it’s consistently good. Here’s an example:

You can order a copy of The Ire of Creation by clicking this link.