A couple days ago we put up a post called “Slow, Then Fast”, the focus of which was a temporal experiment that our fellow metal bloggers at Death Metal Babboon conducted with a piece of doomy sludge (or sludgy doom) by a UK band called Blut. DMB honcho Niek took a cut from one of Blut’s very loooooong songs and sped it up by a factor of three, and reported on the results. We, in turn, put those same two tracks up on our site in order to share the interesting outcome of Niek’s experiment.

This gave us ideas. Because we do most things ass-backwards, we thought it would be interesting to flip Niek’s experiment around. We wanted to take a really fast song — a nice piece of balls-to-the-wall grindcore — and slow it down by a factor of three.

The original plan was to do this with a purely instrumental track, because we thought the slowing down of the music might make the vocals sound fucked up. But after reading the comments on that “Slow, Then Fast” post, we decided to use a track with vocals in addition to one without.

So that’s what we did. We used the same audio-editing software that Niek used, and we applied its magical tools to two songs: “Cemetery Road” by Pig Destroyer and an instrumental track called “Scepters” by Behold the Arctopus. The results surprised the hell out of us. Hear what happened . . . after the jump. 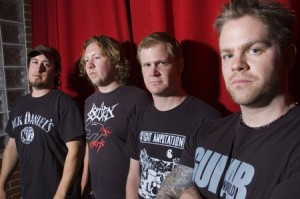 Pig Destroyer is an awesome band, and an unusual group of individuals. If you’ve got more time to burn after you finish this post, you oughta read the feature on Pig Destroyer and the grind scene that was published, of all places, in The Washington Post’s Sunday magazine last year.

It’s fascinating to read a non-metalhead reporter’s peak inside the world of a band like Pig Destroyer, trying to describe the experience for the kind of people who read The Washington Post (i.e., people unlike you and me) (“As the band ripped into the first song, I had the sensation of standing under a bridge as it was being torn apart.”)  It’s long, but worth reading through to the very end. You can check it out here.

Now, onward with our experiment. We chose a Pig Destroyer song called “Cemetery Road” from the band’s Phantom Limb album (and therefore used the beautiful fold-out cover art by John Dyer Baizley at the top of this post). We picked “Cemetary Road” because it’s only 51 seconds long and because it’s really fast. Here’s what it sounds like as Pig Destroyer intended it to sound:

We first slowed down “Cemetery Road” until it lasted about 2 1/2 minutes.  What’s amazing is that although we slowed the song to make it last three times as long, it still sounds fast, and it’s just as crazy as the original. Even the vocals still sound like vocals, almost as if they hadn’t been electronically altered. This is a sign of just how fast Pig Destroyer is playing in the original.  Check it out:

After we listened to that 3x version of the song and realized how fast it still sounded, we decided to really slow it down. We slowed it to the point where the length of the song reached about 9 1/2 minutes — more than 10 times slower than the original.

This time, the result is frightening. It sounds like the gates of Hell have been flung open and a horde of demons are shambling out, shrieking and groaning in agony or anger. The guitar and bass groan and throb, the snare shimmers almost ceaselessly, and the bass drum sounds ridiculously ominous. You may not make it to the end, but try to hang in there for the first 3 minutes or so.

We next turned to Behold the Arctopus.  They’re not really a grind band. They play an intensely technical and experimental form of prog that’s often mind-blowing to hear. But some of their music is extremely fast and just as bat-shit crazy as a lot of grind, so this seemed like fertile instrumental ground for our experiment.

We picked the song “Scepters” off the band’s 2007 Skullgrid album. When that album was recorded, Behold the Arctopus consisted of Colin Marston (Krallice) on the Warr guitar (a 12-string monster that covers the range of a bass and a guitar), Mike Lerner on guitar, and Charlie Zeleny (Blotted Science) on drums (Zeleny has since left).

The original length of “Scepters” is 3:43. It’s an impressive piece of grind-paced, uber-technical music that includes strange passages of guitar noodling, blowtorch shred, blistering bass arpeggios, and outright berzerker drumming. Here it is: 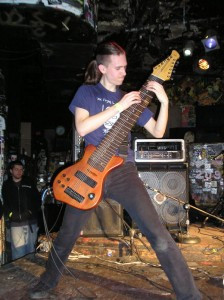 Using the editing software, we slowed the pace by a factor of three until the song reached more than 11 minutes in length. As in the case of “Cemetery Road”, the song still sounded fast, with discernible rhythms and pulsing guitars. Remarkably, the blowtorch guitar solos still sound like badass solos, which is a sign of just how fast Marston and Lerner were playing the original.  Same thing with the drumming — it’s so ridiculously fast in the original that even dragged down by a factor of three, it still sounds almost like unaccelerated skins-work.

We’ll play you the first 4:17 of that extended track to give you a taste of what we mean.

Then we slowed down “Scepters” again, by the same factor we used for the ultra-slow version of “Cemetery Road”, extending the length of “Scepters” until it reached over 41 minutes. It also has a demented, demons-on-the-loose quality, a little more droning than the Pig Destroyer song, but it could still pass as music. You only need to risk your sanity to hear it.

We’re not completely sure what conclusions to draw from this experiment, but we have a few thoughts.

When Niek speeded up Blut’s sludge, he became more impressed with the original. We felt the same way when we slowed down Pig Destroyer and Behold the Arctopus. It made us realize just how sharp the original execution was at turbo-charged speeds, and how really fast these dudes were playing the original songs, given that they still sounded fast when slowed down times three.

We also realized that although life as we know it didn’t end, and time didn’t stop, putting the really sharp breaks on grindcore like these songs does create something scary, something that feels just a little bit like ripping a hole in space-time and discovering that there are creatures in the next-door dimension that are horrifically alien, insatiably hungry, and eager to cross over into our realm. H.P. Lovecraft would have a big fucking smile on his face if he were alive to hear these songs slowed by a factor of ten.

Enjoy the rest of your fucking day, if you can.

UPDATE: I’m feeling humbled by the technical literacy of the comments on the original post. All I know how to do is make mouse clicks on the editing software. But I thought I would go ahead and make the .wav files of the two slowed-down versions of “Cemetery Road” available for listening. Of course, anyone who would listen to these tracks again probably needs psychiatric treatment (or they will after they listen again).  My hearing is pretty shot, and I don’t hear much of a difference between these versions of the songs and the more highly compressed mp3’s, but maybe that’s just me.  Here you go: