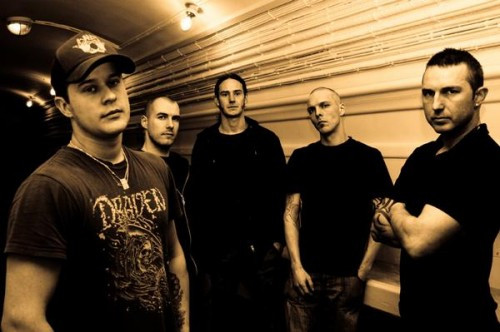 The clock is ticking down on my impending temporary disappearance from blogdom. I had ambitious plans for leaving you with an album review, but decided the time would be better spent finishing up the work necessary to get more guest posts ready for publication while I’m gone. So the album review will just have to wait — possibly until the world ends.

But that doesn’t mean we have no music for you today. We do! It started with a recent video from a Danish band called Psy:code, which released a debut album called Delusion this past spring (on a Danish label called Mighty Music). I didn’t know anything about Psy:code before peeping the video, but since then I’ve done a bit of research.

The band has been around since 2002, and in the fall of 2008 it won a contest sponsored by Danish national radio and Live Nation, the prize for which was supporting Slayer at a concert in Copenhagen in November of that year. So after watching the video (which you will eventually see), I visited the band’s MySpace page and listened to a song called “Web of Lies” — a different sound than the video song, and one that was riveting.

So, then, I found a video of the band’s performance at that Slayer concert — and damned if it wasn’t that same “Web of Lies” song — but set to a boisterous live performance. And I thought, this is all too good not to pass on. So, I’m passing it on. All of it. Both videos and the song.  (after the jump, naturally . . .)

First up, here’s the recording of “Web of Lies”.  I’m not going to tell you what it sounds like — other than to say it’s a body-bending mind-fucker, in a good way. Be prepared to get your groove on . . . It made me start jumping up and down and scared the shit out of my cat.

Here’s the video of the band performing at that Copenhagen performance with Slayer — and, as noted, the featured song turns out to be that very same mind-fucker, “Web of Lies”. If you’re in a hurry, you can skip the recorded intro (though it’s pretty cool) and jump to the song, which begins at about the 2:00 mark:

And now, here’s the video for the song “Set It Loose”, which set today’s post in motion. The song has got a different style than “Web of Lies” — less industrial and more metalcore, with some clean singing. It’s balls-to-the-wall aggression blended with a catchy snatch of melody. I found the story told in the video quite engrossing, though I had no idea what the point was, until I got to the end, and realized there is no point — to a rational mind.

For more info about Psy:code, you can visit their MySpace page here or their Facebook page here. If you live in the U.S., you can buy the album from Amazon MP3. I haven’t explored buying options outside our borders.