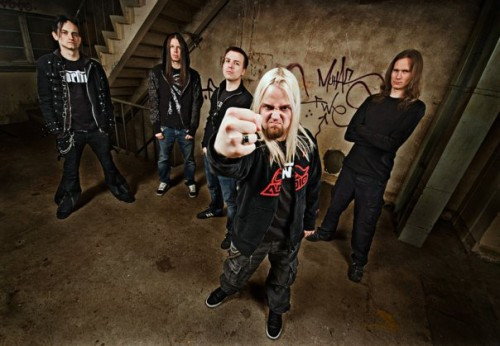 There’s no unifying theme to today’s installment in our Finland Tribute Week series — just a line-up of bands that need to be mentioned if we’re to do even half-assed justice to Finnish metal, all three of which are expected to release new albums in 2011. So, without further introductory verbiage, here we go:

Norther, a band often compared (rightly or wrongly) to Children of Bodom, originally started in 1996 as a death-metal band under the name Requiem, then changed their name to Decayed, and then in 2000, after significant line-up changes, to Norther.

From 1996 to 2009, the band was fronted by Petri Lindroos — who has also been the vocalist/guitarist for Ensiferum since 2004. In 2009, he was replaced as Norther’s vocalist by Aleksi Sihvonen — who is also the vocalist for Medicated and former vocalist for the now-defunct Imperanon (whose guitarist Teemu Mäntysaari is now a member of Wintersun). The band also includes bass-player Jukka Koskinen, who is also a member of Wintersun (as is Jari Mäenpää, who used to be a vocalist/guitarist with Ensiferum) and also now plays for Amberian Dawn, as does Norther’s drummer Heikki Saari.

Are you following this? Are we clear? Apparently, the Finns play musical chairs, too.

Norther has produced five albums to date, the last of which was a 2008 release called N. The band has recorded a new album, to be called Circle Regenerated, for an early 2011 release on Century Media Records.  They’ve released a digital single from that album, which features Sihvonen’s vocals and the guitar playing of Daniel Freyberg (Naildown, Source of Demise), who joined the band this year. The single is called “Break Myself Away”, and after the jump we’ll show you how to download it for free, plus we’ll have some older Norther music for you, too.

Norther has made “Break Myself Away” available for download at their official web site (here). There’s been some controversy about the change in sound wrought by Sihvonen’s vocals. Would you like to hear it first? We can arrange that:

Norther has also recorded a new version of the song “Frozen Angel” from N, which features Sihvonen’s vocals and lyric changes — and that song is also available for free download on this page of the band’s web site.

Now, we’ll move back in time and show you this official video for the title track to Norther’s 2003 album, Mirror of Madness, with Lindroos on vocals and guitar. 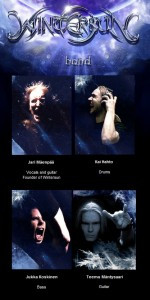 When we think of Finnish, Formula One-style, melodic death metal, we think of Wintersun, along with Children of Bodom and Norther. Like those other two bands, they play super-fast, technically demanding, guitar- and keyboard-driven, melodic metal (e.g., “Beyond the Dark Sun”, “Winter Madness”) — but they’ve also recorded slower, more stately, folk- and power-metal tinged anthems (e.g., “Sleeping Stars”, “Sadness and Hate”).

We still think of Wintersun despite the fact that they’ve only produced one (self-titled) album, and that was more than six years ago. Your three NCS co-founders are fans of this band and have been waiting, and waiting — and waiting — for new music.

We’ll have to wait more. The latest word on the progress of the next album (to be called Time) came via a November 19 update from Wintersun’s frontman Jari Mäenpää, reported in excruciating detail here. Commented Jari: “I’ve been working very hard with the synths and orchestrations and I can finally say that I’m feeling very positive about finishing this long and gruesome task by Christmas. So hopefully around the end of December I can finally start mixing the album. I still have a few vocal parts unfinished, but I will be singing them meanwhile I’m mixing.” 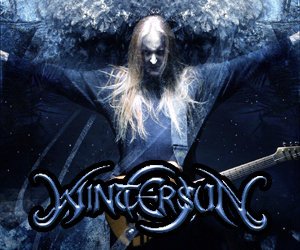 Unfortunately, you can’t get too excited about that report because Jari also explained that his computer gear is inadequate to the mixing tasks, that he has no money for new gear, and that he wasn’t able to get a monetary advance from the label to buy more powerful computer capability without committing to play a few shows — which Wintersun will do. However, the time required to gear up and prepare for the live performances will delay the completion of mixing — which sounds like a vicious circle.

Anyway, if you’re holding your breath waiting for new Wintersun music, you’d best let it out and listen to this instead. It’s a fan creation that combines the album audio track for “Battle Against Time” (a song we really dig) with video footage of the band playing the song from a live DVD they released in 2006. The meshing of the audio and video work pretty well, and it makes up for the substandard audio quality of the original video. Check it out:

If you want to keep track of Wintersun’s doings, here are their pages: MySpace, Facebook, Official Site. 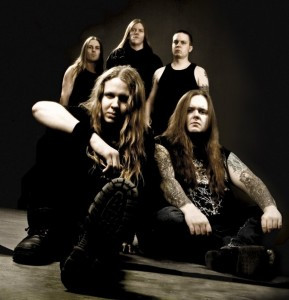 Moonsorrow calls its music “epic heathen metal”, and indeed, it’s all those things. The band draws its lyrics — written exclusively in Finnish — from their country’s legends, myths, and poetry. To date, Moonsorrow has released five studio albums, the last of which was 2007’s V: Hävitetty (consisting of two long songs), and an hour-long EP in 2008 called Tulimyrsky. That EP included one new song — the 30-minute title track — plus two covers and two re-recorded tracks from earlier demo’s.

The band started out playing black metal, and although the music evolved into pagan-folk, the black-metal influence is still present, and if anything, has grown more pronounced in the last two albums. Where this trajectory leads in the next album we’ll find out soon enough because it’s scheduled for a late February 2011 release. The group has said this about the new songs: “This stuff is cold, heavy and crushing. Lyrically we’re dealing with life after the end of the world, so there is no light at the end of that tunnel either.”

What we’ve got for you today is an excerpt of Moonsorrow performing “Jumalten Kupunki” from their 2003 album, Kivenkantaja, at the Tuska Open Air Festival in Finland. It’s very cool, too.

That was just too damn good for us to call it quits. Here’s another Moonsorrow track. This time the song is “Sankarihauta” from Moonsorrow’s 2001 release, Voimasta ja Kunniasta. I’ll kill myself later for using this word, but the song is fucking epic.

For more info about Moonsorrow, you can visit their MySpace, Facebook, and official web site.