If you’ve been keeping count, we’ve done Finland Tribute Week posts for 10 days in a row (including today) — and that’s not counting the two posts about Amorphis and Before the Dawn that started this tribute rolling before we decided to formalize it with a name. Either way, whether it’s been 10 days or 12, we’ve moved beyond the normal dictionary definition of “week”, at least if you live on Earth. There’s just too much awesome Finnish metal that we feel compelled to write about — and we’re still not done.

We’re not quite sure how much longer we’ll roll with this. We’re not even sure what day it is. But based on what we’ve got up our sleeves at the moment, it will last about three more days (interspersed with a couple of guest contributions). Even then, we’re positive we’ll have left out bands that are near and dear to the hearts of many of you.

Yes, Finland’s a small country, but it’s still a fucking country, and there’s just no way we can do complete justice to all the metal it’s producing, even if we continued this series into the New Year. Plus, lots of things have been happening in the wider world of metal while we’ve been tunnel-visioned with Finland, and we need to get back to that wider world.

But not today. Today, we’re going to play our MISCELLANY game with Finnish metal. As regular readers know, in our usual MISCELLANY posts, I randomly pick bands I’ve never heard before, I listen to a song (or two) of their music, and I make a log of the journey for this site — usually not knowing in advance what the music will sound like or whether it will be appealing or disappointing.

And, sure enough, the music tends to validate our hypothesis that there’s some mutating substance in the Finnish water supply that turns a high percentage of Finnish children into hot-shit musicians, because this was one wild ride, from start to finn-ish. (for reactions to the music, and the tracks I heard, read on after the jump . . .) 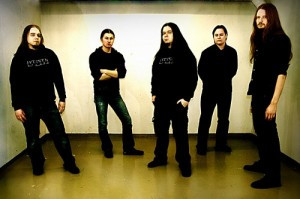 Our UK contributor Andy Synn sent this name to me, proclaiming the band’s latest album “one of the finest released this year”. So, this is kind of a cheat on the MISCELLANY rules, because even though I’d never heard of this band, I did have reason to believe it would be good — though Andy’s tastes and mine are certainly not completely congruent.

The band’s name seems to mean “eternal darkness” or “an eternal polar night” in Finnish. Between 1997 and 2004, they produced four demo’s, followed by a debut album in 2006 (The Forlorn), an EP in 2008 (Closure), and a second album this year (Fall of Icons) — though it looks like most of the band’s current membership have only been together since 2007.

I decided to pick a song off Fall of Icons for this MISCELLANY expedition. Now, there are only five songs on the album, but they range in length from 7:47 to 16:43 — in other words, long songs. I decided to listen to a track called “Condemned” (9:49), and I thought it was fascinating.

If I’d heard this band before writing our earlier feature on Finnish black metal, I’d have included them as yet another dimension in Finland’s multi-faceted black-metal soundscape. As I hear it, “Condemned” is a progressive metal exploration of dark dimensions, with extended multi-guitar instrumentals in the verse sections and blow-you-down explosions of sound in the chorus sections, where the vocals come in. And those vocals are just as varied — acidic shrieking alternating with death-metal gutturals and clean singing.

These dudes are really talented instrumentalists with great feel for the music — I was especially surprised by, and really enjoyed, the inventive bass picking, which more than holds its own with the top-shelf guitar leads and solos. Check it out:

Fall of Icons can be had at iTunes and Amazon, and for more info about the band — plus a free download of the band’s Closure EP — visit their official site here. 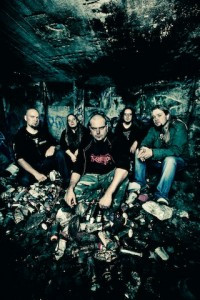 Hateform made our list of Finnish bands to consider based on a recommendation from Jarkko Tasala (whose band The Jasser Arafats produced a 2010 album we reviewed with high praise here). Hateform is a relatively new band, with two albums in their discography — Dominance, released in 2008, and this year’s Origins of Plague. I decided to check out the opening track from the new release, “Hate Equals Salvation” — and I nearly fell out of my chair.

This is definitely my kind of metal — like turning the corner into the open door of a blast furnace. It’s fast, high-octane, turbo-charged mayhem with big, barbed rhythmic hooks, flowing melodic guitar leads, and a juicy solo that kicks the intensity level even further into the red zone. The blend of mid-ranged howls and death-metal growls is nice and nasty, too. Have a listen:

I wanted more of this death-thrash, so I checked YouTube and found this official video for another track off Origins of Plague., “There Will Be None”.  Yet another head-whumping song, and the video is an appealing blend of shadow and flickering light.

For more info about Hateform, and to download tracks from some of the releases, visit the band’s official site here. Origins of Plague is available on iTunes, and undoubtedly elsewhere. 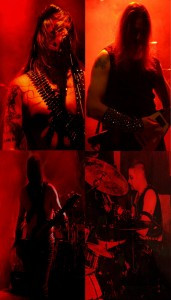 When we invited reader suggestions for Finnish bands to consider for this series, we got a raft of them from a reader named Surgical Brute. Some of the names were Finnish death metal pioneers (e.g., Abhorrence, Funebre, Depravity) who’ve been defunct since the early 90’s. I thought it might be better to pick a band that’s still putting out new music, and leave an historical retrospective to another day (or another writer).

So the band I picked from Surgical Brute’s list was Flame. Flame has recorded a handful of demo’s and splits, beginning in 1999, leading up to their 2005 debut album, Into the Age of Fire. Flame’s second full-length, March Into Firelands, is scheduled for release on January 5, 2011.

The song I heard was a track from Into the Age of Fire called “Arts of the Black Wisdom” — and it’s yet another winner: super-fast, treble-dominant black metal. The guitars generate a vortex of distorted, chainsaw whirring — except when the lead guitar spits out a white-hot solo to close out the song. The drummer favors d-beats over blasts and crashes the cymbals with abandon, and the vocals match up with the unbridled fury of the instruments. This is a demonic jet engine with the throttle opened all the way up. Have at it:

Flame: Arts of the Black Wisdom

March Into Firelands can be pre-ordered at this location, and you can find more info about the band at their MySpace page, where you can also hear a track (“Black Realm of Satanas”) from the forthcoming new album. 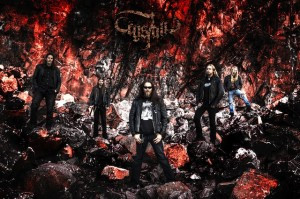 Crystalic hit our radar screen via a recommendation from Death Metal Babboon‘s byrd36. — who hasn’t steered us wrong yet. Between 1998 and 2007, the band put out five demos, and then released their album debut — Watch Us Deteriorate — in 2007. Earlier this year, after two years of work and a frustrating year of hunting for a record label that would be more than “a total rip-off on the band’s expense” (their words), Crystalic decided to self-release their second album, fittingly called Persistence.

With my head still trying to re-assemble itself after those tracks from Hateform and Flame, I decided to hear the second song on Persistence, called “Throne of Sin” — because, well, I’ve always wanted one of those. It’s a blend of thrash and melodic death metal with jittery guitar riffs, melodic keyboards that swirl and arc, soaring clean vocals accompanying the gouging growls, and a nice, piercing guitar solo.

This song wasn’t as much of a stand-out for me as the songs from the three preceding bands, but solid enough that I’ll go back and listen to more of Persistence. Here’s the track I heard:

You can download Persistence for free at the band’s official site (here). 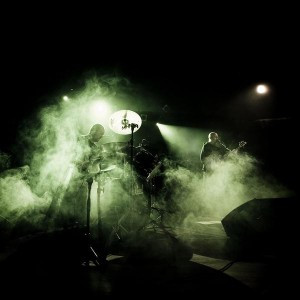 I decided to check out Cause for Effect based on this NCS comment from Canopy‘s Fredrik Huldtgren: “Fusiongrind…yeah…its wierd as all fuck, but entertaining.” Weird as fuck but entertaining — say no more, I thought. Sounds like just my thing.

The band’s latest album was released earlier this year and it’s called Progressive And Minimalist Recording. The “minimalist” adjective is certainly accurate — the album contains 25 songs with a total run-time of about 20 minutes. Their previous album, 0+1=01, contained 33 tracks. Even without Fredrik’s tip-off, I assumed from the track lists that this had to be bat-shit grindcore.

Since the songs average about 30 seconds each, I decided to listen to the first six. What an unexpected fucking surprise! This sounds like two dudes, and two only — one on drums and one on bass, and that’s it. And it’s definitely not conventional grind. More like coffee-house jazz, but with frog-croak vocals — if there were coffee-houses or frogs on Mars.

What’s really fascinating, and equally mystifying, is the length of the songs. Each one has a distinctive groove and a unique turn on the bass-and-drum riffing. Each one could easily go on for the normal three-to-five minute length — and I wanted them to, because these guys are clearly in a creative zone. Maybe the point is to show us that it’s possible to create a tiny nugget of self-contained music in the space of a half-minute, but the point would have been made in a song or two. Doing it song after song feels like a big, unrequited tease.

On the other hand, there’s always another song, and another, and another. To be honest, I didn’t stop at six.  I listened to 12 — and I still wasn’t half-way through the album. To be honest, I’m going to listen to the remaining 13 songs. The music is just so refreshingly different, in a weird-as-fuck way. You’ll understand when you listen to these babies:

Cause For Effect: Not Ok Radioactive Situation

You can buy Cause For Effect’s releases at this site or (at least in the U.S.) from Amazon MP3. The band’s MySpace page is here, and you can hear 13 songs, in a blinding flash, at their ReverbNation page. Last but not least, the band has made a whole bunch of free downloads available here.

P.S. It turns out that yes, this band has been a bass and drums duo since 1999, and the band has produced seven album, eight EPs, and a live performance video. Speaking of videos, you can find a bunch of ’em here.

That’s it for today’s Finnish-flavored edition of MISCELLANY. What a bonanza of a trip it was! Hope you got as much of a charge out of it as I did. As always, enjoy the rest of your fucking day.