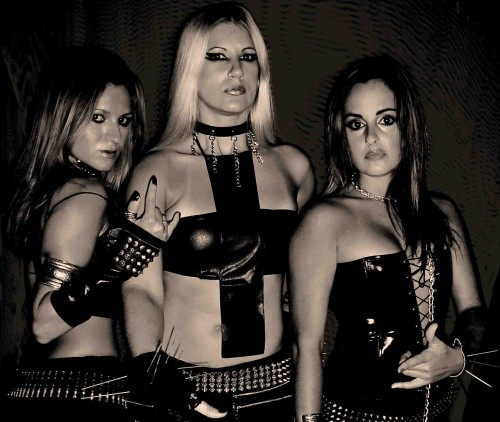 Ladies and gentlemen, this is the debut of a new column which Islander has kindly allowed me to write and display here at NoCleanSinging.

Each week (ok, whenever I get round to it, they may not be weekly – or they may be more frequent, we’ll see) I’m going to be providing an introduction, a retrospective, or simply a re-consideration of  a band which I feel merits the treatment. Certain bands will be more well known than others, and primarily these bands will be part of THE SYNN REPORT simply because I feel that with all the bullshit media hype in the world, the band in question has been perhaps judged unfairly due to the influence of matters non-musical. Certain bands, however, you may not have heard of before at all, as although I do not consider myself a paragon of underground taste, there is only so much time each of us can devote to finding new music and really exploring it. Hopefully this column will help a little!

Each column will deal with a single musical entity, considering their works and progression in turn. Certain columns will be dedicated perhaps simply to eras in a band’s career and progression, considering and evaluating changes in style and direction with the benefit of hindsight and (hopefully) critical objectivity. Although that probably won’t last very long!

Anyway, for my first column I would like to introduce you to the Greek band ASTARTE.  (more after the jump, including sample songs from the band’s discography . . .)

With a consistently changing line-up, the primarily female band Astarte began life as a purely Black Metal band, albeit one with an ear for a distinctive and dark melody.

Over the years they have metamorphosed into a more Black/Death hybrid of a band, shedding and recruiting numerous different members along the way, but each time progressing and improving upon their own sound. They have in the past ten years gained a cult following of their own, whilst also gaining the patronage and friendship of some of the larger leading lights of the international Black and Death metal scenes. Guest slots from members of Rotting Christ, Dimmu Borgir, God Dethroned, Arch Enemy and Mayhem have all served to cement them as a band to be taken seriously on the world stage, although their overall lack of exposure (coupled with their inconsistent line-up issues) has yet to provide them with that all-important break-out opportunity.

What follows is a critical dissection, largely positive, of each of their 5 albums in turn, with a sample song provided for your listening pleasure. If you like the band, spread the word about them! 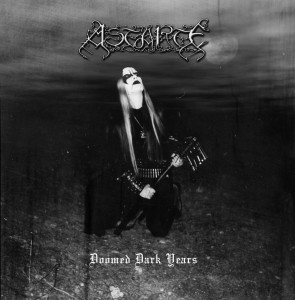 Like many of their brothers and sisters around the world, the debut album from Astarte was very much in thrall to the methodology and constraints imposed by the burgeoning black metal scene. Keyboard effects are a large part of the sound on this album, in a similar manner to those employed on Emperor’s early works. The songs are primarily long 5min+ numbers, whilst the vocals are a mid-range shriek that can occasionally be a little indecipherable, but which suits the music extremely well.

The riffs are primarily mid-to-fast paced tremolo and chord progressions, accented by keyboard parts and supported by competent, if not groundbreaking drumming. The bass is nicely placed in the mix, audible (in contrast to much prototypical black metal) but not overwhelming, helping to cement the sound whilst also occasionally breaking away to add some melodic fluidity to the songs.

The album should definitely manage to retain your interest and attention, particularly with the considered use of keyboard parts, occasional changes into clean guitars and generally interesting song structure. A good debut, with the promise of better things to come. 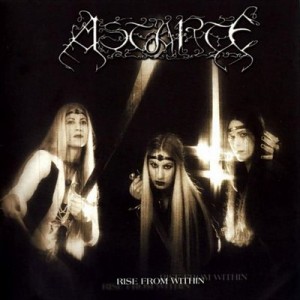 By second album Rise From Within, the corpse-paint was pretty much gone and the sound had been tightened up noticeably. The production is thicker, though still within the realms of traditional black metal, and the overall tempo has increased to a more blast-ready pace. The keyboard effects are far more tasteful and noticeably darker this time around, and the vocals (shared between founding members Kinthia and Tristessa), although still primarily mid-ranged, are far clearer whilst still retaining a vicious edge to them.

The drumming has noticeably improved, becoming far more varied and initiating some more clever and interesting patterns with both the hands and feet. The tightness of the blasting and kick-pedalling is also extremely pleasing. That’s not to say that the band has simply dropped into the cliché of full-speed all the time; there’s a pleasing level of “groove” to a lot of the riffing that contrasts nicely with the faster moments. The material on offer definitely comes across as more varied than that on offer on their debut and is all the better for it, the guitars branching out slightly and creating more memorable parts for themselves, whilst even the bass gets a look in – something which I find always makes a black metal band all the stronger.

Altogether however the particular strength of this record, which suggests the band deserve to stand-out from the black metal pack, is the sense of increased confidence in both the band’s musical abilities and their song-writing compositions.

Sample song – Rise From Within I (Mystical Provocation) 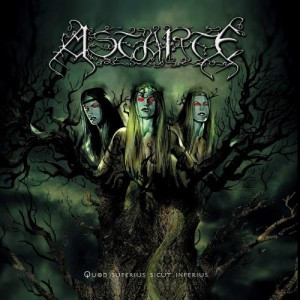 Immediately apparent is the improved production, recalling the ever improving sound of their countrymen in Rotting Christ. The improved sound is initially most apparent in the drum and keyboard production, both sounding far bigger and packing more punch and atmosphere respectively. The increased use of well-written piano parts, as well as backing choirs and vocal effects, also demonstrates the band at least attempting to broaden their sound somewhat.

It’s clear that when the band push themselves the pace is definitely faster than before, whilst the slower and more mid-paced parts are performed with more confidence and a greater sense of their importance and depth. The band has definitely found a more epic tone both in structure and performance (see “Oblivious Darkness” for a great example).

There has also been a clear improvement in the clarity of the vocal performance, even allowing for some semi-gothic clean vocal overtures which serve to enhance the variety of sounds on offer. Also for the first time (but not the last) the band incorporate guest vocals, with Spiros Antoniou of Septic Flesh adding some varied tonality to the death vocals of “Astarte”.

The guitar tone has been further refined from both their previous releases, chunkier and broader in scope, the riffs cut through with more power, whilst the leads are now a much more integral part of the overall sound without ever being particularly flashy or overbearing – instrumental track “Sickness” is a great example of the band’s increased rhythmic prowess and grasp of velocity. The clean guitar parts are a pleasant improvement as well, really off-setting the darker and more metal parts of certain songs and supplying some welcome light and shade.

A very good album which owes a massive debt to Rotting Christ, but also increasingly demonstrates the band stamping their own distinctive identity onto their material. 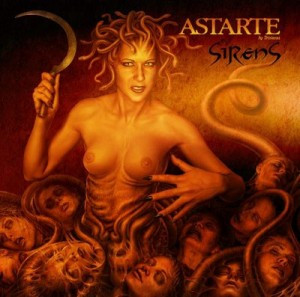 With Sirens, Astarte really nailed their own specific sound and direction. The darkness is still present, but the overall sense of majesty and aggression have improved tenfold. The drumming is now a propulsive force behind the stately riffing, whilst the keyboard use has been scaled back slightly and added to the mix in a far more organic fashion. This allows for increased focus on the interplay between guitars and bass, as well as allowing the band to grow into a heavier dimension. The bass tones in particular are far smoother and warmer than ever before, really filling out the sound without ever lessening the overall attack of the instruments.

Reflecting this shift towards a slightly more death-metal approach, Tristessa’s vocals have moved towards a slightly lower range overall, whilst still maintaining a recognisably black metal rasp – all the more impressive when one considers that Tristessa is now the sole vocalist, her partner in crime Kinthia having departed before the recording of the album.

The lead parts add a range of melodies over the blasting and pounding the drums provide, adding to, but never taking away from, the blackened nature of the overall sound, whilst the increased use of death-metal elements (see “Deviate” for a prime example) is a natural progression for the band, and never comes across as forced or unnecessary.

Guest vocals from both Sakis Tolis (Rotting Christ) and Shagrath (Dimmu Borgir), on “Oceanus Procellarum (Liquid Tomb)” and “The Ring (Of Sorrow)” respectively,  are a nice touch as well, showing the band paying tribute to their peers. The presence of Nicolas Sic Maiis providing guest vocals on the song “Bitterness Of Mortality (Mecoman)” also demonstrates the band paying due reverence to their own roots pre-Astarte as the band LLoth.

The album is a milestone in the band’s career, demonstrating their now unshakeable conviction and dedication to their own particular brand of metal, with its roots in Black Metal but incorporating a greater sense of depth and stylistic breadth, along with a greater knowledge of emotional content. 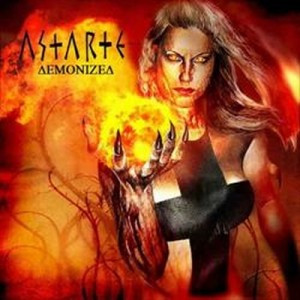 Their fifth album (and most recent) showcases the band’s move further towards the Death Metal sound (see the title track for evidence), albeit still retaining the all important melody and structure of their Black Metal roots (“God I Hate Them All” being a powerful argument for this approach).

Tristessa’s vocals vary in tone from the traditional rasp to the lower register growl she showcased first on Sirens, whilst the guitar tone is far thicker and crunchier, and the riffs as a whole are far more aggressive. The retention of their Black Metal roots is still evident in their dark tremolo melodies and the subtle use of keyboard augmentation whilst the bass remains an important and well-used element in their sonic stew.

Nicolas Sic Maiis returns to provide guest vocals on the track “God Among Men”, however the real treats are the contributions from some of Black and Death Metal’s most prominent figures; guest vocal spots from Attilla Csihar (Mayhem), Henry Sattler (God Dethroned) and Angela Gossow (Arch Enemy) really show the kind of support the band has built up over the years, and each one adds his or her own particular x-factor to the proceedings, be it the undead croak provided by Attilla Csihar on “Lycon”, the hate-filled bark of Henri Sattler on “Queen Of The Damned”, or the blast-furnace vocalisations of Angela Gossow which balance out the prominent lead guitar work on “Black At Heart”.

The lead work on the album has also taken a definite step up; more solos and more complex lead patterns and harmonies have worked their way in naturally as the band have delved deeper into heavier waters, maintaining their connection to the past whilst also allowing them to vary their approach somewhat, as on the strange and piano-led opening to “Heart Of Flames (Burn)” and “Everlast” (with one of the more distinct solos on the album near the end), or even the surprising cover of Accept’s “Princess Of The Dawn”.

Best of all even at their slower tempos the band no longer feels at all mid-paced; the approach is now more akin to a prowling beast, waiting to unleash its full fury – the sense of threat implicit is quite palpable. The best album they’ve produced thus far and hopefully a taster of better things to come!

12 Responses to “THE SYNN REPORT, PART 1: ASTARTE – AN INTRODUCTION AND RETROSPECTIVE”