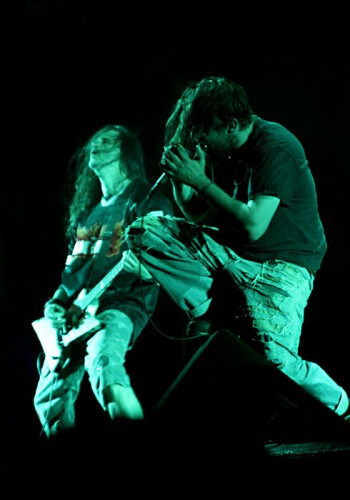 We look forward to new albums by The Haunted because it’s always an adventure. To borrow Forrest Gump’s famous line, they’re kind of like a box of chocolates: You never know exactly what you’re gonna get. You might get thrash or melodeath or grind or metallic hardcore, or even something that closely approaches hard rock. It’s probably fair to say that all those ingredients have always been present to some extent in The Haunted’s music, but to greatly varying degrees, depending on the album or even the song within the album.

What you can generally count on, even if you can’t exactly depend on a precise style, is that the music will be super-charged with groove and power, packed with infectious riffs, and scalding in the caustic vocal delivery of Peter Dolving.

The band came together 15 years ago in Gothenburg, Sweden.  Two of the original members (brothers Jonas and Anders Björler) were alumni of the extremely influential Swedish melodeath band, At the Gates, and a third of the original members, guitarist Patrik Jensen, has also been active in Witchery for about as long as he’s been with The Haunted. Dolving was also in the band at the outset, but left after release of The Haunted’s first album, only to return again in 2004 on the band’s fourth record, rEVOLVEr. Those four are still together, with drummer Per Möller Jensen replacing ex-At the Gates drummer Adrian Erlandsson in 1999.

A new album by The Haunted (their seventh) is scheduled for release in March on Century Media. It was engineered and mixed by Tue Madsen, and it will be called Unseen. And now we have a taste of the surprises in store on Unseen, because on Saturday night the band played a song from the album at Swedish radio’s annual music awards. We’ve got the clip after the jump . . . along with a video retrospective on The Haunted’s music. 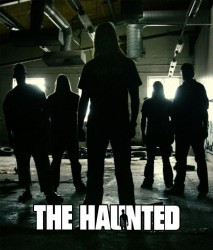 The song that The Haunted debuted a couple days ago at the “P3 Guld” awards ceremony on Swedish television is called “No Ghost”. We knew that The Haunted were capable of surprising us, but we were still unprepared for “No Ghost”. It’s a stomp-and-strut, Pantera-style plate of southern-fried blues metal, with lots of chunky riffs. It’s a style similar to “River Run” from the Versus album, but even more so. We prefer the faster, thrashy melodeath that The Haunted is capable of dishing up, but “No Ghost” is still catchy, and if history is an accurate predictor, the rest of Unseen will sound like something else anyway.

After you watch the video of “No Ghost” being performed live, we’ve got a retrospective of other music from The Haunted. We tried to pick videos for songs that are both outstanding tunes, standing alone, but also reveal some of the stylistic divergence in what The Haunted has done over time.

Starting from early and moving to later, what we picked for your viewing/listening pleasure are a couple songs off 2004’s rEVOLVEr — an awesome live performance video of “99” from the Road Kill DVD/CD released last year and the official video for “All Against All”. Then we’ve got “The Flood” from the 2006 album, The Dead Eye. And we’ll follow that with “Trenches” from the band’s last album, Versus (2008).

But first, here’s the brand new song, “No Ghost”. Have fun with all this music, because it’s all good . . .

9 Responses to “THE HAUNTED”