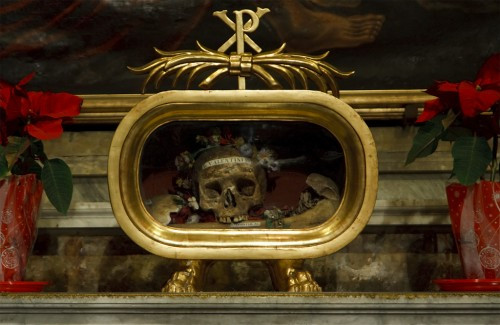 Nice photo, huh? And so appropriate for this day, particularly as adornment for a metal site. It’s the flower-crowned skull of St. Valentine exhibited in the Basilica of Santa Maria in Cosmedin (Rome, Italy). And with that intro, we’re going to provide a little history lesson which convinced us (and maybe it will convince you), that Valentine’s Day is metal, despite what we used to think. We will also have music, of course, as a Valentine from us to you.

Now, back to that skull. Who did it really belong to, back when it was covered with warm flesh? What we now call Valentine’s Day was originally established in honor of an early Christian martyr, Saint Valentine. But according to the Catholic Encyclopedia, there were at least three martyrs by the name of Valentine: they were from Rome, Terni, and Africa. Each was said to have died on February 14.

It’s probable that Pope Gelasius I, who established St. Valentine’s Day in 496 AD, had in mind the Valentine who was beaten with clubs and stones and then beheaded in Rome in 269, 270, or 273 AD, supposedly for performing marriages. Now, that’s a metal way to meet your end.

To elaborate, some historical accounts report that Emperor Claudius II (“Claudius the Cruel”) banned marriages when Roman men began refusing to go to war in order to stay home with their wives. Valentine allegedly chose death over renouncing his religion and his performance of weddings. Legend has it that on his last day he wrote a message for his guard’s daughter (whose blindness he allegedly cured) signed, “From Your Valentine” — though there appears to be no historical basis in fact for the story about the girl, the blindness cure, or the note.

Like many Christian celebrations, what we do on Valentine’s Day has its origins in ancient Rome. Lupercalia was a Roman festival held on February 13-15, at least partly in honor of Lupa, the she-wolf who suckled the infant orphans Romulus and Remus, the founders of Rome. That’s why it was called Lupercalia — the “Wolf Festival”. That’s a metal name, for sure, but wait ‘to you see what the Romans did during that festival.  (more after the jump . . .) 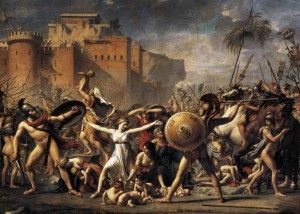 As the historian Plutarch described it around 44 BC, Lupercalia was a time when “many of the noble youths and magistrates [including Consul Marcus Antonius] run up and down through the city naked, for sport and laughter striking those they meet with shaggy thongs [known as februa — for which the month is named]. And many women of rank also purposely get in their way, and like children in school present their hands to be struck, believing that the pregnant will thus be helped in delivery, and the barren to pregnancy.”

Shit.  Helluva wolfish festival. And what a shock to learn that the same pope who established Valentine’s Day on a date that coincided with Lupercalia was also the pope who abolished Lupercalia. In other words, it appears he swapped one festival for another — a religious one for a pagan one. Man, that story repeated itself throughout the establishment of the church (but we’ll leave that digression for another day).

Valentine’s Day is celebrated all over the world, but mainly in the U.S., Canada, Mexico, and countries in Europe. In the U.S., of course, it has become big business. Consumers will spend on average $77.43 on gifts. E-retailers expect to rack up about $650 million in sales of candy, flowers, and other Valentine gifts. And did you know that 73% of those buying flowers for Valentine’s Day are men? Or that 15% of American women send flowers to themselves on Valentine’s Day? 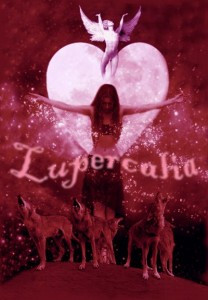 Somehow, over time, all our holidays become prods for the spending of money. So much for the remembrance of martyred saints. Forget the flowers and the gifts — bring back the shaggy thongs and let’s just fuckin party!

Of course, we can’t leave the subject of Valentine’s Day without mentioning the cards. Lots of cards. About a billion Valentine’s Day cards are exchanged each year in the U.S. Teachers will receive the most cards (because school kids make cards in class), followed by children (for the same reason), mothers, wives, and then sweethearts.

Hallmark has over 1330 different cards just for this day. I wish they would make one that features the skull of St. Valentine resting in that basilica in Rome. That would be a good card, wouldn’t it? All it needs are some fitting words to go inside the card. I came up with a few candidates:

“You look better than this.  I mean that with all my heart. Happy Valentine’s Day!”

“I will still love you, even after the maggots have stripped the rotting flesh from your bones. Happy Valentine’s Day!”

Well, maybe I should leave the card greetings to the professionals. Or maybe you’ll come up with something better to share with us in the comment section, y’know, as a Valentine from you to us?

Your friends here at NCS didn’t send you a card or any gifts, but that doesn’t mean we won’t be remembering all you loyal readers with great fondness in our blackened hearts. And we do have something for you, as a token of our love and admiration.

We featured a different live performance of this awesome song back at what turned out to be the beginning of our Finland Tribute Week, but just found this one, from the band’s 2010 DVD, Forging the Land of Thousand Lakes. For some reason we thought of it as a fitting piece of music for this day, partly because of the lyrics, which we’ve set out below the video.

I made our bed under the stars
Covers a-plenty, bear skin hides
Stroked the arc of golden curves
Kissed the lips of silver

P.S. Just in case you think we made up those factoids we stuck in today’s post, all we did was synthesize what we read at The Font of All Human Knowledge (here, here, and here), with a few additional bits of trivia from this place.

P.P.S. We meant the title of this post in the nicest possible way. Every now and then, we just uncontrollably start channeling Frank Mullen . . . .