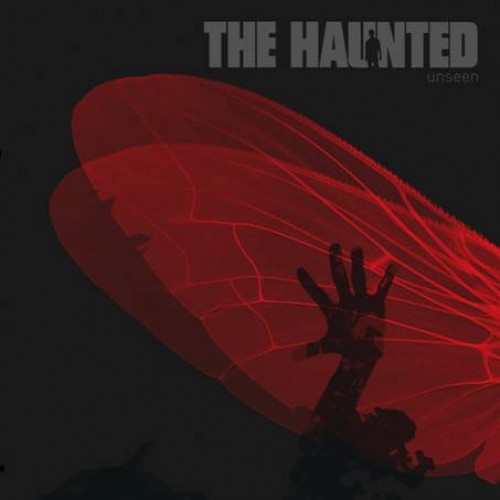 Our UK contributor Andy Synn joins us for the second day in a row, this time with his review of “Unseen” — the latest album by The Haunted, which was released to the masses in NorthAm yesterday.

I’ve sat with this album for quite a while now. My initial response to an early stream of the album was cautiously guarded, almost negative even, as I felt that although I enjoyed many of the songs, certain elements (particularly Peter Dolving‘s voice) seemed far more disjointed and separate from the tracks as a whole than ever before. All this quickly changed when I got my own copy of the album on cd and dedicated some real time to getting to know the album in depth. I loved it. Yet again I refrained from writing about it at the time, wanting to see if these initial feelings were themselves merely a response to my original disappointment or a symptom of my general worship of Dolving-era Haunted.

In the end I’ve found that the album is incredibly strong, although in many ways a true “grower” of a record, although not without its flaws. The early disparate comparisons (Tool, Korn, In Flames, Corrosion Of Conformity) prove themselves to be premature, as listening to the record  in full provides a much better picture of a singular and united piece of work that is consistently The Haunted, but works to naturally expand the remit of their sound. It reminds me in spirit, if not entirely in sound, of Vision Of Disorder‘s misconstrued masterpiece “From Bliss To Devastation”, wallowing in a similar mire of depravity and dysfunction that makes it just as heavy, but in a way totally different from their past work in general.

If you want me to give a simple summing up of the record, then I would say that it’s not quite as brilliant as The Dead Eye and stands perhaps on a par with (or perhaps just superior to) rEvolvEr, a record which has higher “highs” than this album, but also a greater incidence of filler. If nothing else, it’s a huge improvement on the inconsistent mess of often ill-judged experimentation that was Versus – I’d go so far as to pull out the old cliché about this record being the album Versus should have been, just as experimental but with more focus and overall better song-writing. (more after the jump . . .) 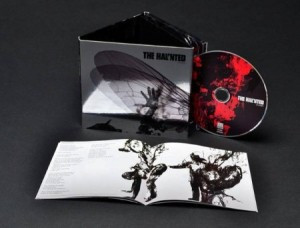 First track “Never Better” is one of the more aggressive cuts, showcasing the band’s post-thrash, oblique approach to metal well, as although the riffs are heavy, they are primarily mid-paced and crunchy, relying not on speed but on confidence and power (as well as that reliably thick Haunted guitar tone) to give each note a punishing weight, the band using subtle off-beats and strangely sequenced note and chord progressions to make things feel fresher and more unpredictable.

While “No Ghost” has a drunken swagger to it, punching hard with low-slung guitars and sharp, clever drums, mixed with a dirty, hazy sense of melody, lurching bass and slowly simmering melodies, “Catch 22” has a more taut, hardcore feel to it, minimalist riffs repeating infectious patterns of semi-melodic tones and insistent chugging to create a cramped, claustrophobic sense of barely contained frustration. The melodic chorus captures a palpable sense of desperation, while the wandering bass-lines give the latter half of the song a sense of free-form flow over which the guitarists explore a mix of dark melodies and harsh, metallic stabs of fury.

Some have suggested that Dolving’s over-reliance on common phrases (“Ashes to ashes…”, “Damned if you do, damned if you don’t…”, etc) reflect an over-simplification and over-generalisation of the lyrical message. However, personally I’d disagree with this statement. I find that Dolving’s use of more common-place phrasing makes his melodic vocals closer to disturbing lullabies, as the phrase’s meaning is twisted and perverted to suit the song. What’s more, as a lyricist he is talented and interesting enough to take what might be predictable material in anyone else’s hands and mould it into something significant and worthy of repeat analysis and interpretation.

I’d also like to take this time to praise the drum work of Per M. Jensen on all the tracks thus far (and on the album as a whole), as it seems he’s really upped his game in terms of the subtly complex, intricate patterns he’s playing these days. The lack of balls-out aggression may put some people off (that’s not to say he’s gone soft, the man’s still no slouch on the double-kick pedal!) but his carefully considered playing is one important part of what gives each song its own individual character. 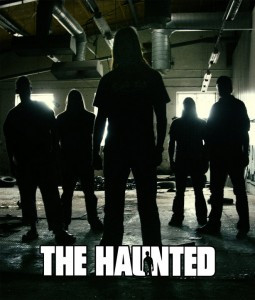 “Disappear” begins with an insistent stab of guitar that adds a layer of compulsive melody to the rolling bass-led groove which explodes into full force, quickly stamping its mark on the track. The barely perceptible odd-timing of the verses demonstrates the impressive compositional skill of the band and their mastery of the subtle nuance, taking relatively simplistic riffs and arrangements and twisting them into more enigmatic forms. Follow-up “Motionless” is as immediately catchy and infectious as any Haunted track that I can think of, the great riffs and extremely interesting and memorable bass-lines given a real chance to shine and flex their muscles. The latter half of the song also wields some considerable metallic might, crushing syncopated guitars and drums shifting at an unstoppable pace with real intensity.

However, the song does demonstrate that although Peter Dolving is often one of the band’s greatest strengths he is also often a weakness due to overindulgence in some ideas that, whilst different, come across as under-developed. The chorus on this track is, in my mind, simply too weak and does not sit right either with the riffs beneath it or with the generally more aggressive direction of the song. Sometimes I feel that a good scream or simpler vocal arrangement would be infinitely stronger than some of the more obscure and challenging choices made in their stead. On the other hand, the song also showcases some well-composed and implemented backing vocals and some particularly great bass playing by the under-appreciated Jonas Bjorler.

The title track to “Unseen” has divided opinion already, its use of melody and choppy guitar in what is almost a totally new way for the band providing both an unforeseen shock and a welcome piece of variety. Dolving’s voice bleeds sincerity on this number, perhaps in order to pre-empt those accusations of selling out or dumbing down, while the other four members lock into an airtight groove throughout the song, supporting and strengthening each other. For all its short length and relatively straight-forward structuring, the song has a dark edge to it and some strong, barely concealed progressive tendencies, packing a lot of layers and moods into a very short space.

“The Skull” begins with an eerie tapped guitar melody and a dark lullaby of a vocal melody. Slowly, a growing sense of menace creeps in with some building guitar chords, before a martial drum beat and chugging riff introduce a whole other side of the song. One of the album’s most aggressive riffs powers the verse sections as Dolving spits an unrelenting stream of his distinctive bile. The stately, confident march of the track allows the band to take in some haunting atmospherics and clean vocals alongside the crushing guitar riffs, before the song closes on an outro of bleakly fatalistic whistling and distant gunfire, seguing into short interlude track “Ocean Park”. 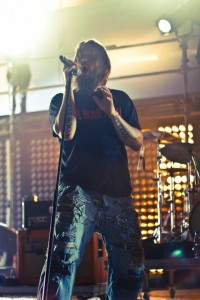 Both “The City” and “Them” toy with the standard Haunted dynamic, with the former consisting of more *traditional* fare, a mix of forceful riffs, brooding melody and existentially angst-ridden vocals which would have fit perfectly on “The Dead Eye” if not for their unpredictable mixing and flavouring, whilst the latter could well be the best song on the record, a catchy-as-hell opening riff bolstered by some of those distinctive Haunted melodic nuances, foreshadowing a mammoth groove. The song toys with a slow/fast dynamic, whilst bassist Jonas Björler continues to prove himself as perhaps the unspoken MVP of the record, his reverberating bass tone adding a whole new level of depth and subtlety whilst also fleshing out the muscular power of the more aggressive riff sections. The quiet, deathly whisper of the bridge soon shifts into a confident, powerful solo section, each note carefully and perfectly placed for maximum effect, before a final crushing guitar attack ends the song on a strident note.

“All Ends Well” is an oddity, an extremely melodic track that showcases some very restrained drumming, some softer melodies and far less guitar dominance than any of the other tracks. The separate elements of the track are all of high quality, but overall the song shows less cohesion than the rest of the material, the different sections seeming to hang together more by coincidence than design.

On standard versions of the album the final track is “Done”, a call-back to the bleak mood of songs like “Abysmal” and “My Shadow”. The opening of the song is a bleak, slow burning mix of clean-picked guitar and sinuous guitar leads. Lurching bass lines and sliding guitar chords batter up against tight, down-picked rhythm guitar and ringing, Slayer-on-narcotics guitar melodies whilst the vocals utilise a melodic howl to give voice to their sick desperation. Clearly aware of the story-telling art of song-writing, the end builds and builds ominously… to no crescendo, the song dropping away suddenly into whispered calm and silence, a far more effective approach than the more predictable explosion of sound and fury one might have expected.

If possible, I would sincerely recommend getting a hold of the album’s bonus track “Attention”, a great song in the vein of The Dead Eye favourites “The Fallout” and “The Cynic”. Almost linear in construction, the rumbling bass and chugging guitars combine with hypnotic drums to slowly build both momentum and atmosphere before exploding into a series of controlled bursts of barely coherent rage and callous, calculated vitriol. 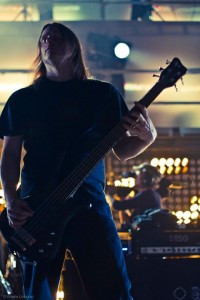 Overall, the album is actually a lot less of a shock than many reviews might have you believe; many of these sounds and elements were present on previous records, simply in lesser amounts. A return to listen to the more obscure moments of rEvolvEr and The Dead Eye should provide sufficient context for a dedicated listening session for this album, allowing one to appreciate its clever intricacies and sense of organic growth. The experimental/progressive tendencies the band have flirted with on previous releases are more carefully harnessed for better effect on this album, and the record is best enjoyed as one cohesive piece of dark, post-thrash metallic art.

The record does have its weaknesses; Dolving’s unrestrained vocal experimentation occasionally serves to weaken, rather than enhance, certain tracks which would perhaps have befitted from a more direct approach – something that the band seem to have consciously made an effort to avoid on this record. Also, some of the tracks, “Ocean Park” and “All Ends Well”, continue to be afflicted by the lack of development that plagued Versus. However, this album as a whole is remarkably strong, as well as being wilfully difficult.

Not an easy record to digest and one that was clearly written with one eye on the predictable knee-jerk reactions of many of the more reactionary elements of the metal community, I would thoroughly recommend giving this album a good length of time to get under your skin, after which you may well find yourself unable to ever escape the crawling itch it plants just beneath the surface.

EDITOR’S NOTE: To help make you itchy, here’s “Them”, which Andy said might well be the new album’s best song:

8 Responses to “THE HAUNTED: UNSEEN”