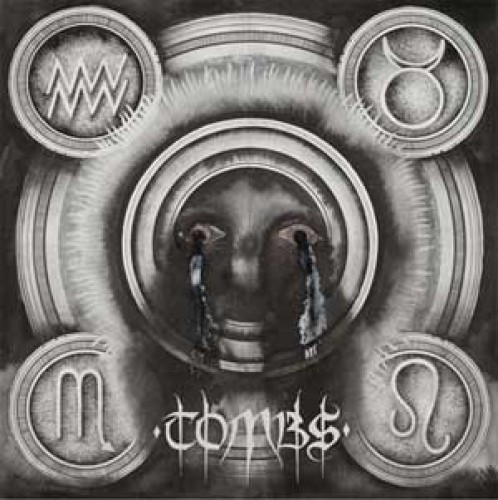 I’m still barely awake after a very late night at Seattle’s El Corazon partaking of Rotting Christ‘s current headlining tour of the U.S. I have a very sore neck, in addition to still being half-asleep. If I ever fully wake up, I will put up some photos of that show.

In the meantime, I did perk up when I saw the news that within the last 24 hours, Tombs began streaming a new track from their next album, Path of Totality, which is scheduled for release by Relapse Records on June 7. This is the follow-up to the Brooklyn trio’s February 2009 album, Winter Hours, which I thought was a fucking killer — a virtually non-stop vortex of grim, hateful, teeth-chattering, blackened doom.

The new song is called “Vermillion”. From the beginning, it crashes over you in a surging wave of tremolo guitar and not-quite-what-you-expect drum progressions — and it doesn’t let up. As on Winter Hours, all the hostility is leavened with ringing guitar melodies, but it’s mainly heavy as fuck, and Mike Hill is in prime, roaring, vocal form. My only complaint? This jam could easily have gone on for twice its actual length without losing one whit of interest. Jump past the jump and listen to “Vermillion”. I feel more awake already.

Gird your loins and visit Tombs on Facebook (here), where previous music is streaming on the Tombs Band Page, in addition to “Vermillion”.