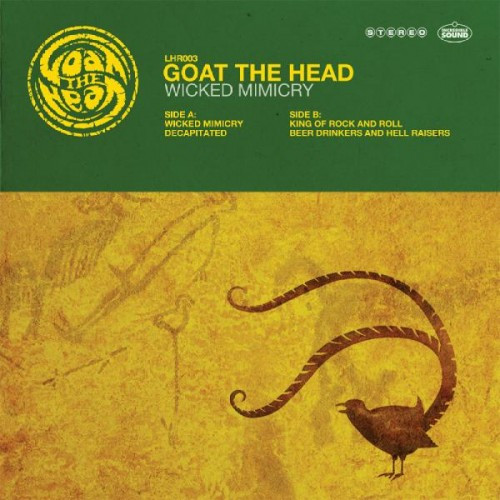 Norway’s Goat the Head have fully occupied a metal niche that was waiting to be filled since . . . uh . . . the Paleolithic era: contemporary primal caveman death metal. (And did you know there’s a Paleolithic weight-loss diet?) Here at NCS, we love this band. We’ve posted about them so many times in the past that we’re expecting royalty checks from the massive sales of Goat the Head music that our publicity has no doubt generated. What about it dudes? Royalty checks in the mail?

You may not want to wade through all of our posts, but for background info, here’s a link to one of them (our review of the band’s latest album).

The reason for this post is that Goat the Head has just released a four-song EP called Wicked Mimicry that includes three covers and one original tune. Despite the title of this post, not all the songs they cover are really “classics”, but we exercised a little license in order to get an alliterative post title (using the second definition of “alliteration” once again, Misha).

The covers are a punk song (“Decapitated”) by the immortal Broken Bones, a heavy metal song (“King of Rock and Roll”) by the immortal Dio, and a blues song (“Beer Drinkers and Hell Raisers”) by the immortal ZZ Top. The original tune is the title track, “Wicked Mimicry”. Put it all together, and it’s a fuckin’ party from start to finish.  After the jump, our impressions plus a chance for you to hear one of these tracks . . . 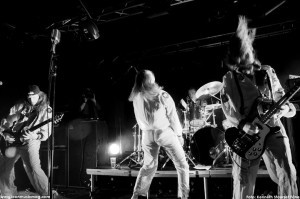 The original song is a slash-and-burn blast of death-thrash that got our motors running hot, with an infectious groove, an appealing mix of clean and growly vocals, and jet-fueled guitar soloing. This song has got “mosh mayhem” written all over it.

“King of Rock and Roll” rocks and rolls with big chords and arena-ready guitar pyrotechnics. It’s a faithful rendering of the Dio original, but with Per Spjøtvold’s low-end caveman vocals replacing Dio’s distinctive vox.

And finally we have the Goats’ cover of a song by one of our all-time favorite blues-rock bands, those Rock and Roll Hall of Famers from Texas, ZZ Top. The original of this song is so familiar to me that the caveman vocals were a bit of a jarring juxtaposition with my memory of Billy Gibbons’ original, but the Goats’ instrumental performance is the fucking real deal.

In a nutshell, Wicked Mimicry proves that these dudes can do it all — they picked four divergent styles of music to execute, and they nailed every one of them — complete with their own distinctive, contemporary primal caveman flourishes. Picking one of these songs to offer up for your listening pleasure was a tough choice, but we’re goin’ with the original track:

Wicked Mimicry is available in a limited 7″ vinyl edition and as a digital download. Info about where to get the music is available at this location. We picked up ours for less than four bucks at Amazon MP3.