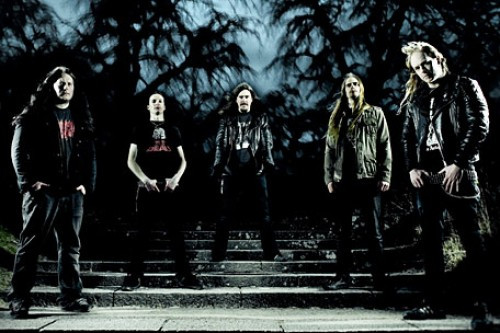 Bloodbath is fucking sick. To quote Noisecreep, because they called it right: “When you can count vocalist Mikael Åkerfeldt (Opeth), guitarists Anders Nyström and Per Eriksson (Katatonia), bassist Jonas Renkse (Katatonia), and drummer Martin Axenrot (Opeth) in your band’s lineup, you definitely have the right to brag.”

Bloodbath’s three studio albums and two EPs kill shit, and they’re among our favorites here at the NCS Island. Unfortunately, the band doesn’t play live shows very often, but the one they did at the UK’s Bloodstock festival was captured on film and it’s about to be released (on April 25) by Peaceville Records in a DVD called Bloodbath Over Bloodstock. The DVD is also supposed to include a 16-page booklet, bonus footage taken from the PartySan Festival in 2008, and extensive band member interviews.

Today, the aforementioned Noisecreep exclusively premiered an excerpt from the DVD, with Bloodbath playing the song “Eaten”, from the band’s Nightmares Made Flesh album. It’s fucking sick. Watch it here after the jump (and thank you, Noisecreep).

20 Responses to “BLOODBATH OVER BLOODSTOCK: “EATEN””