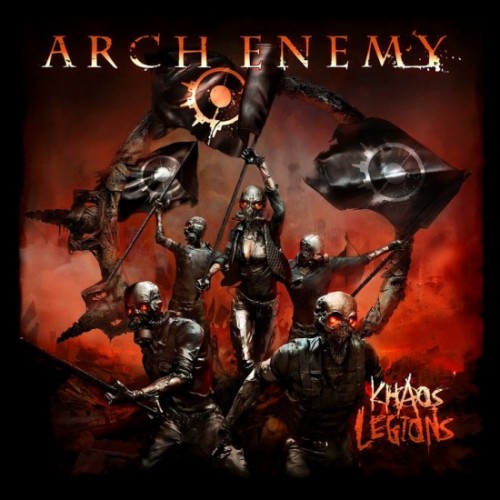 It’s safe (and easy) to say that everyone who has listened to Arch Enemy falls into one of three camps: (1) you like everything the band does; (2) you like nothing the band does; (3) you liked the earlier albums, but have been meh about the more recent ones. We will soon have a new Arch Enemy release from Century Media. Khaos Legions will debut on May 30 in Europe and June 7 in North America. So far, two songs have been made publicly available.

The first — “Yesterday Is Dead and Gone” — was released as a video and premiered by Guitar World.  We wrote about that one here. The second, “Blood-Stained Cross”, has been exclusively streaming at MetalSucks since last Friday. I finally listened to that track and felt it was worth a post, because although many of you are also MetalSucks readers, I know some of you aren’t.

MetalSucks introduced the song by proclaiming that Khaos Legions “may very well be the legendary melodeath outfit’s finest hour since 2001′s Wages of Sin.” I certainly can’t agree or disagree with that comment yet since I’ve only heard two songs, but I will say this: Although I thought “Yesterday Is Dead and Gone” was okay (and only okay), “Blood-Stained Cross” is wonderful, and if the rest of the album is in league with it, I’l be agreeing with that MetalSucks assessment.

The song has a dark, vicious edge that does indeed recall Wages of Sin, with a great melodic guitar lead — and Angela Gossow’s vocals on this song may be the best effort from her I think I’ve yet heard. Yes, it’s still a very melodic song, but it’s also morose and seething and musically varied. I’m liking it a lot. If you’re in Category (1) or (3), as described above, you should definitely go to MetalSucks today (using this link) and listen to “Blood-Stained Cross.”

10 Responses to “ANOTHER ARCH ENEMY SONG”