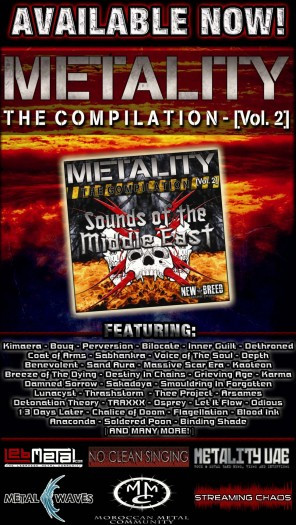 NO CLEAN SINGING is proud to announce the release of METALITY’s second compilation of music from the Middle East. If you don’t already know, METALITY is a great metal blog that covers music from around the world, but with a unique emphasis on metal bands from the Middle East and North Africa. That blog has turned us on to lots of great music in the past. Through an effort so gargantuan as to make us exhausted just thinking about it, METALITY has now assembled a compilation of music from more than FIFTY bands — including bands we’ve previously written about here at NCS — and it’s now available for free download.

If you scrutinize that flyer up above, you’ll see our name as a co-sponsor of the release. In fact, we’re the sole North American co-sponsor of this comp. One perq of being a co-sponsor is that we got an advance listen to all the tracks on this compilation. What it doesn’t mean is that we’re sworn to rave about all the music regardless of what we honestly think about it. So, we’re going to give you our honest opinion about this comp: It’s amazing.

The download files (two of them) for this album are big — and not just because they include more than 50 songs. The download also includes a separate file of album art for each band plus a file of links to the web pages or social media sites for each of them. You could be forgiven if you needed something more than the word “free” to invest the hard-drive space on this beast. So, after the jump, we’re going to do three things:

We’re going to provide more detailed observations about the music on this compilation so you’ll have a better idea what you’re getting into; we’re going to feature five of our favorite tracks; and (courtesy of METALITY), we’ll give you an embedded music player that will allow you to stream each song or put the whole album on continuous play. And of course, we’ll give you the link for the download if you like what you hear.

There are some real gems on this comp — we think it’s worth your time to stay with us after the jump and investigate this further.

As a broad overview of the compilation, it includes a diverse array of metal from more than a dozen different countries, from Turkey to Morocco. There’s even a track from an Iranian metal band called Arsames. You’ll find power metal, thrash, metalcore, and straight-up hardcore. You’ll also hear songs from several black metal bands, including Bouq (Jordan), who we’ve written about before (here).

However, the majority of the 50+ tracks are death metal — and almost every flavor of death metal is included: old-school crushers faithful to the Florida, New York and Swedish progenitors of the genre; flashy fusions of thrash and death; technical death metal; deathcore; brutal death metal; melodic death metal — you name it.

We were especially excited to see that the comp includes songs from three other excellent bands who we’ve covered in the past — Voice of the Soul, whose 2010 EP we covered here, Sawlegen (covered here), and Bilocate (see this post). Their songs are among our favorites on the comp.

Speaking of favorites, I’ve picked five songs to feature. I wanted to pick bands that we haven’t written about before, just to broaden your horizons a bit, and of course I picked songs that particularly appealed to my own tastes in metal, which means most of them are going to run over you like a phalanx of war machines.

No reason to pussy-foot around. We’re going to start with something that will just tear your fucking head off. This band is from Lebanon. Last year, they released their debut album on Osmose Productions called Veni Vivi Vomui, which translates to “I came, I saw, I vomited.” Nice. The song included on the METALITY comp is from that album. Buckle your seat belts:

[audio:https://www.nocleansinging.com/wp-content/uploads/2011/05/Kaoteon-One-by-One-Dogs-Heed-the-Call.mp3|titles=Kaoteon – One by One (Dogs Heed the Call)]

This band is from the North African country of Tunisia. They released their first EP called A Natural Taste for Blood in 2009. The song included on the comp is called “Die On Your Own”, and it’s a titanic blend of symphonic black metal and walking-dead death metal with quite possibly the most awesomely cavernous vocals on the comp. Fans of Dimmu and Old Man’s Child should get up on this. Hot shit.

[audio:https://www.nocleansinging.com/wp-content/uploads/2011/05/Damned-Sorrow-Die-On-Your-Own.mp3|titles=Damned Sorrow – Die On Your Own]

Phobia is another Tunisian band who released an EP in 2009 called Itinerary. The song on the comp is called “Unavoidable Torment”. It has some riffs and rhythms in common with deathcore, but includes a cool, proggy mid-section and an unexpected, contrasting keyboard outro that works. Very nice song.

InnerGuilt is another Lebanese band that was originally called TristMoon. The song on the comp is a fusion of thrash and death-metal, fast and technical and fueled with a smokin’ hot melodic guitar solo. Damned fine metal. (The comp also includes a bonus TristMoon song called “The Dungeon”, which is another of my favorite tracks on this album.)

This is yet another Lebanese band, and the name of the game is thrash, with its punk roots fully exposed. This band self-released a demo in late 2009, but the song included on the METALITY comp seems to be a new one. It’s got a stripped-down, garage-studio, underground honesty going for it that I like (and that’s coming from someone who’s generally indifferent or downright bored with the re-thrash movement of the last few years). Here ya go:

Now, those five songs ought to whet your appetite for the rest of what the comp includes. Here’s a player that will let you stream all the songs (except for five bonus tracks that are included with the download), and to download all of this, HERE is the link to the METALITY page that will give you download instructions.