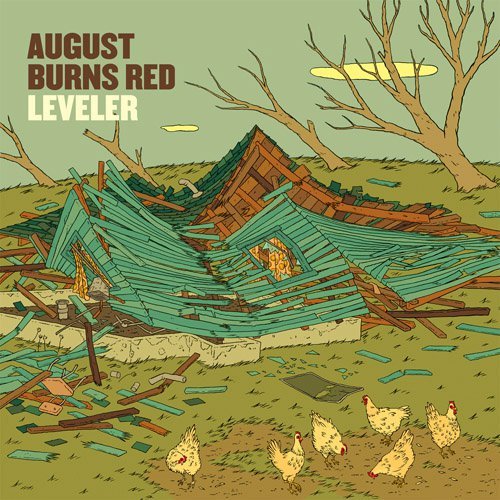 August Burns Red has a mega-sized fan base. Let’s just take their Facebook “likes” as an indicator of that: 807,942 “likes” as of this writing. That’s a shitload. Now, I don’t mean to suggest we’re in awe or anything — we’re closing in on that number ourselves. With just 807,651 more likes, our NCS Facebook page will tie August Burns Red’s. So, we’re not in awe, we’re just stating the fact: For a metal band with a hardcore edge of extremity to their sound, they’ve built an unusually large empire of fandom.

The three of us who originally founded this site are among those fans, and we’ve posted about them a lot since we started NCS. They’re not as extreme as most bands we write about here, but they’re smart, creative songwriters, they play with passion, and their musical output shows they’re not standing still. Oh yeah, their songs are also distinctive and really memorable — so much so that we named ABR’s song “Meridian” (from the Constellations album) to our inaugural list of The Ten Most Infectious Extreme Metal Songs of 2009.

ABR has a follow-up to Constellations due for release on June 21, called Leveler. It features that interesting cover art above (by Jordan Crane) showing a house that’s been leveled (see what they did there?) by a tornado or hurricane or some kind of disaster, but with life going on anyway. Or at least chicken life. It’s not your typical metal cover, but we still thought it was eye-catching.

With the album release fast approaching, ABR has begun the process of fan titillation by uploading the first song from the album for streaming. It’s called, naturally enough, “Empire”, and it’s a metalcore bruiser. After the jump, we’ve got that song for you plus some additional details about the album.

The album is going to come in “regular” and “deluxe” additions.  The deluxe version includes (in addition to the 12 tracks on the regular edition) four bonus tracks: An acoustic version of the ABR song “Internal Cannon” that’s supposed to include “some mariachi flare” plus a guitar solo by producer extraordinaire Jason Suecof; a cover of another ABR song called “Pangaea” by a post-rock band by the name of Bells; a shreddy piano version of “Boys of Fall” by an artist named Zach Veilleux; and the original MIDI version of “Empire”.

And that brings us right back ’round to “Empire”. The band has recently been playing this song at their live shows, but this is the first chance we’ve gotten to hear the album version, and it’s a hot number: fast, convulsive rhythms; vitriolic hardcore vocals; a memorable guitar solo; a mix of body-blows and melody that’s already taking root in our craniums.

Not long ago, we wrote about the new song released by Unearth. “Empire” is yet another reminder that despite the absolute flood of metalcore bands that have rained down and crested the river banks over the last decade, the good ones are still capable of creating music that’s worth hearing. I’m not sure it’s even possible to break new ground within the genre, but ABR (like Unearth) reminds us of why we got caught up in this kind of music years ago and why we think it still has something to offer. Check out “Empire”:

A whole bunch of different Leveler bundles are now available for pre-order at this location.

4 Responses to “THE EMPIRE OF AUGUST BURNS RED”