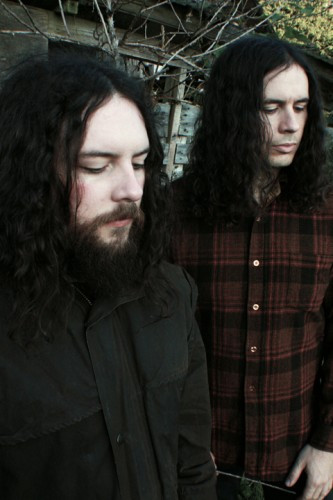 We received a press release earlier today. It made me sit up straight. It elevated my pulse. It may have elevated other parts of my body, but that’s between me and, uh, the other parts of my body. In a nutshell, we now know the release date and name of the next album from Wolves in the Throne Room, plus information about guest appearances on the album and advance news about the band’s touring plans. I’m just gonna lay it on you as I got it:

“After devoting late Winter season to writing and recording, Wolves in the Throne Room are in the final stages of completing their fourth full-length opus of epic, earthen Black Metal ceremony.

“For over six months the Weaver brothers, Aaron and Nathan, have been immersed in the painstaking writing and recording process of their newest album, and this week the process is nearly complete; at press time the album is in its final mixing stages. The Wolves in the Throne Room clan clan have confirmed the title of this forthcoming astral black metal document as Celestial Lineage.

“The transmutation reaches a new level with the completion of the album. In contrast to the bleakly hypnotic architecture of Black Cascade, the lifespan of Celestial Lineage breathes more expansive and visionary life into the duo’s work. The Wolves in the Throne Room trademark long-form approach to arrangement remains intact, but there is a stronger thread of Popul Vuh-inspired underworld synthscapes and star-lit pulse woven with the intertwining guitar figures.

“Celestial Lineage will end a trilogy of releases which began with Two Hunters (2007), and is segued by Black Cascade (2009), and like both previous albums, will be released via Southern Lord Recordings, with a street date of September 13, 2011 now confirmed. Three songs on the album feature Jessika Kenney’s liturgical choir and solo voice, as heard on Two Hunters as well as 2009’s Malevolent Grain EP, the album also including orations from Aaron Turner (Isis).

“Stated WITTR drummer Aaron Weaver of the writing process for Celestial Lineage: “An ornate constellation of imagery is what guides the songwriting process. Cedar temples crowned with burnished bronze domes glimpsed in a remote valley. Wild Midsummer bonfires and feasting on roasted flesh. All of the sounds serve to evoke the images that exist in our minds eye. With this record we’re going to explore an entirely new palette of sound. We want the instruments to sound like the liturgical music of a cedar cult.”

“Besides closing out a trilogy within Wolves in the Throne Room’s own annals, Celestial Lineage also marks the final release to ever be recorded in engineering wizard Randall Dunn’s infamous Aleph Studio, the birthplace of a plethora of groundbreaking releases from Earth, Sunn O))), Boris, Cave Singers, Bjork/Omar Souleyman and countless more over the past decade, as well as where the immense tones and energy on WITTR‘s lauded Two Hunters and Black Cascade albums were captured.”

More cool news: In support of the new album, Wolves in the Throne Room plans to begin worldwide touring this September, kicking off in the Americas, “and eventually engulfing many other regions of the planet through 2012.”

8 Responses to “WOLVES IN THE THRONE ROOM – THE COUNTDOWN BEGINS”