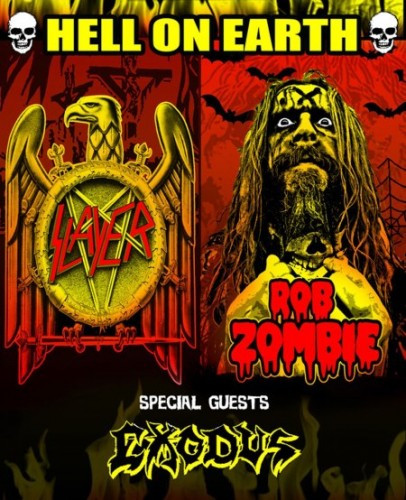 This is not an entirely hypothetical question. It could happen. Our brothers in blog at Heavy Blog Is Heavy are giving away two tickets to the Vancouver stop of the Hell On Earth Tour on August 3, plus a chance for a meet-and-greet session with tour headliners Rob Zombie and Slayer (Exodus is also on this tour, but to ask them questions, you’ll have to get up stage in the middle of their set and see if you can get their attention).

Those tickets and passes are the grand prize in a contest HBIH is currently running, with the second prize being two more tickets (but no meet-and-greet). To enter, you just have to answer this imminently practical question: If all hell were to break loose and zombies came out of the woodwork, how would you slay them?

I keep answers to questions like this on a little notepad in an emergency kit, which includes such other potentially useful items as a can of catfood, a block of C-4 explosive, two packs of Ding-Dongs, and a used-only-once band-aid. My notepad also includes words of greeting in seven known extraterrestrial languages. In other words, I’m fuckin’ ready for anything.

I know how to kill zombies, too. Kill ’em so they won’t be coming back — ever. Unfortunately, since I’m within the secret, monolithic brotherhood of blogdom with the HBIH people, I’m ineligible to enter this contest. Probably for the best; it wouldn’t be fair to everyone else. I also know what to ask Rob Zombie and Slayer, but if I told you, I’d have to kill you.

To get more details about the HBIH contest, go here. Contest ends on July 26.

50 Responses to “IF YOU LIVED IN WESTERN CANADA AND COULD ASK ROB ZOMBIE AND SLAYER WHATEVER CAME TO YOUR PUTRID MIND, WHAT WOULD IT BE?”