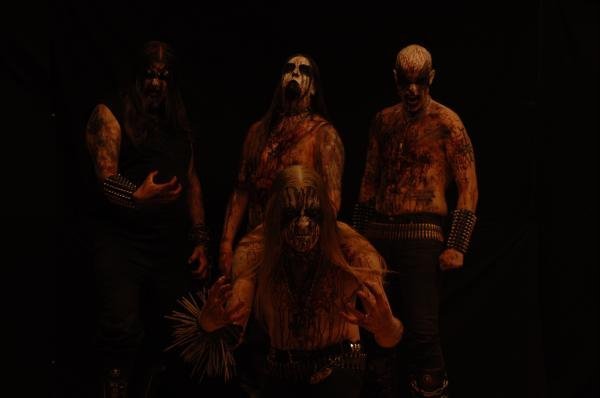 Over the weekend, I added a post about an article by Sasha Frere-Jones on black metal in the most recent edition of that bible of all things metal, The New Yorker magazine. The article has drawn scorn in certain quarters of the underground metal empire and provoked a nice, protracted discussion in the Comment section of that NCS post. One thing Mr. Frere-Jones did was to contrast (in a way some think was condescending) the original Norwegian BM scene and sound with American black metal bands such as Wolves in the Throne Room and Liturgy.

By sheer chance, I experienced a similar black metal contrast of my own this weekend after adding that post. On Saturday night (Oct 8 at El Corazon) I witnessed a live performance by Portland’s Agalloch. They played a show in their home town on Friday night and then made the trip north to Seattle for a second show, and that’s where I caught them. If there were a heaven as well as an earth, I would have moved both to see that, because I have such vividly awesome memories of the first (and only other) time I got swallowed up by Agalloch performing live.

In Seattle, the band closed a very long set with two songs, “In the Shadow Of Our Pale Companion” from The Mantle (2002) and an instrumental called “The Lodge (Dismantled)” from The Grey EP (2004). More about those songs, plus a live video of the latter from the Portland show after the jump.

The Norwegian half of my contrasting BM experience came via Ragnarok — not the “death of the gods” cataclysm from Norse mythology, but the cataclysmic black metal band who borrowed that name for themselves back in 1994. I’d never spent time with their music until getting an e-mail from Patricia Thomas, who seems to manage about half the black metal bands in Norway. She reported that Ragnarok was finishing a 14-date tour of Brazil and Mexico and would be returning home to continue work on their seventh full-length album. She included a link to a Soundcloud player that includes all the songs from the band’s live set list, plus another link to an official video of the band performing the title track to their 2004 album, Blackdoor Miracle, with frontman Hoest from Taake providing the vocals. (more after the jump . . .)

I watched the video and then listened to the first few songs on the Soundcloud player and emerged from that experience with all the skin shredded off my face and skull, figuratively speaking. The band unleash hellfire, churning out a fireball of head-whipping black thrash that I found irresistible. The video, in particular, captures the wild, cathartic mayhem of the music in the barely contained viciousness of a live performance. Hoest’s vocals are also amazing, like a full-force flood of acid being ejected from a firehose straight at your face.

Here’s the video, and after that is the Soundcloud player. I’d recommend at least listening to the first track, a re-recording of the song “It’s War”. 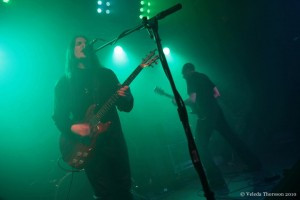 In all genres and sub-genres of metal, the music evolves over time, borrowing from other musical traditions (or other styles of metal), branching off and leading to something different from where it started. Agalloch represents a branching of black metal that has carried the music to a quite different place from its Norwegian roots. It’s unabashedly emotional and sweepingly melodic, embued with a kind of nature-centered mysticism, often ambient in tone and feel, and even incorporating elements of prog-rock or prog-metal. Agalloch isn’t the only band in the world doing this (Ireland’s Altar of Plagues comes to mind, as well as the afore-mentioned Washingtonians in Wolves in the Throne Room), but they’re certainly one of the standard-bearers.

The stylistic divergence of Agalloch’s music from the scalding acid-bath of the original Norwegian template doesn’t mean the music has become wimpy or hipster — not by a long shot. Especially in the band’s live shows, where even the acoustic parts of their music are performed by fully electrified guitars, the experience is one of complete immersion in primal power, though of a very different kind from what Ragnarok conjures — more the power of an immense forest of oaks than the voraciousness of a wolf pack on the hunt.

In Saturday’s show, Agalloch played long instrumental jams that emphasized the melodic sweep of their oeuvre. Fittingly, the night ended with “The Lodge (dismantled)”. The original version of “The Lodge” was an acoustic instrumental that appeared on The Mantle. On The Grey EP, Agalloch stripped away the acoustics and converted the song into something quite different, calling it “The Lodge (dismantled)”. On the EP, it lasts for more than 13 minutes, which includes about 4 minutes of feedback at the end.

In the live show I saw, it didn’t go on for that long, but it still retained a load of feedback at the end, with the guitarists and the bass player sawing on their instruments with wooden sticks, rubbing the strings against poles supporting the ceiling of the club, holding them above the heads of the audience and shaking them. By that point, I’d already pretty much lost my mind in the music, and that ending left me in a quasi-zombified state of bliss.

Here’s a fan-filmed video of the song from the Portland show — the video and audio quality are about what you’d expect (mediocre), but it will give you a sense of how divergent Agalloch’s music is from where it all started. After that, I’m also including the penultimate song from the set, “In the Shadow of Our Pale Companion”, with lyrics, just because.

“IN THE SHADOW OF OUR PALE COMPANION”:

[audio:https://www.nocleansinging.com/wp-content/uploads/2011/10/02-In-The-Shadow-Of-Our-Pale-Companion.mp3|titles=Agalloch – In The Shadow Of Our Pale Companion]

Through vast valleys I wonder
To the highest peaks
On pathways through a wild forgotten landscape
In search of God, in spite of man
’til the lost forsaken endless. . .
This is where I choose to tread

Fall. . .so shall we fall into nihil?
The nothingness that we feel in the arms of the pale
In the shadow of the grim companion who walks with us

Here is the landscape
Here is the sun
Here in the balance of the earth
Where is the god?
Has he fallen and abandoned us?

Here at the edge of this world
Here I gaze at a pantheon of oak, a citadel of stone
If this grand panorama before me is what you call God. . .
Then God is not dead

Here is the landscape
Here is the sun
Here at the edge of the earth
Where is the god?
Has he fallen to ruin?

ADDITIONAL INFORMATION ABOUT THESE BANDS:

12 Responses to “BLACK METAL: A STUDY IN CONTRAST (RAGNAROK AND AGALLOCH)”