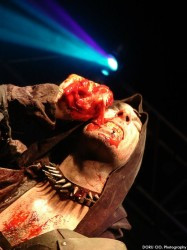 Just so that last post featuring me tooting my own horn about myself doesn’t linger at the top of the NCS site for the next 8 1/2 hours until tomorrow’s first scheduled post, I have this official video, just released, from the most excellent Noctem, whose new album Oblivion our most excellent Andy Synn reviewed here and who Andy also interviewed here.

The featured song is called “The Arrival of the False Gods”, which Andy described as “all piledriving rhythms and violent vocal catharsis whose brooding guitar adds a palpable sense of menace to the proceedings”. If you’re an epileptic off your meds or have a moral problem with bands who play with pig heads on stage and eat pig organs during the performance, don’t watch this.

P.S. My interview by The Number of the Blog can be found via THIS LINK.

9 Responses to “NOCTEM: “THE ARRIVAL OF THE FALSE GODS” (PIG HEADS FOR EVERYONE!)”