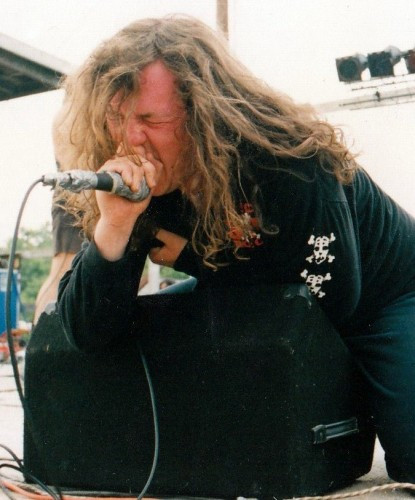 (Phro remembers a few metal greats who left this world in 2011. He assures me that he in no way means disrespect to the departed or their bereaved families — this is just his Phro-like way of saying “Thanks for the rocking!”)

Last night, after forcing a pony to snort enough coke to kill an elephant and then drinking the O.D.ed pony’s blood, I passed out in a pond of vomited up pony blood and enchiladas.  (Nothing helps pony blood go down like Mexican food!)  And, like Paul fallen off his horse on the road to Damascus, I was visited by a savior: Seth Putnam.

“What the Virgin Mary’s bloody tampon??  Seth Putnam??  I though you were fucking dead!  Are you here to rape my dirty nose?”

He laughed like an angel (an angel who’d just woken up after doing a speedball out of a hooker’s torn anus, but an angel none the less.)

“Son of a…I knew that last pint was too fucking much.  Motherfucker.  So, I’m dead too and you’re here to take  me to hell?”

He laughed again.  This time it was more like the mirth of a child watching his or her first Tijuana donkey show.

“No, not at all!  I’m here to reveal my gospel to you to share with all the world!”

I punched myself in the dick to see if I was dreaming.  (A little pinch is nothing when you’re on pony blood—you need to inflict real pain.)  I screamed like a little kid seeing Sandusky’s face on TV.  At least I knew I wasn’t dreaming.  After panting in agony for a while, I regained composure and wheezed out a question.

“It’s quite simple really.  I was sent to earth by the metal gods to live a sinful life and then die as a result of my sins to atone for all the clean livin’ assholes who bore the shit out of everyone else.”

I blinked at him through tears of pain.

“I just punched myself in the dick so hard I ruptured a baby making factory.”

He laughed, whipped his dick out, and mushroom punched my forehead.

I turned redder than the bloody nose of whoever Chris Brown is dating and quickly pulled my finger out of my ass.  While Seth choked back a mouthful of vomit, I took a sniff, just to make sure everything was in proper order, you see.  I burned off all my nose hair.  Ha-ha!  I know where Hussein hid all the WMDs!

After a few seconds of awkward gagging, Seth breathed deeply and stood upright and stared at me hatefully until I started to feel like a caged rat who knew it was about to be used for AIDS research.

“So…uhhh…I’m just supposed to listen to your gospel and…uh…tell everyone about it?”

“Do you really think you can remember what I tell you word for word?”

“Hey, look, I’m your first (only?) disciple, right?  So, I’m appropri…apprapria…abbropritealy…I’m fucked up like you.”  Sometimes syllables make my brain hairs hurt.

“Fine.”  He manifested a roll of…something and a quill and handed them to me.

“What’s this made of?”  It was soft and pliant.

I vomited out.  (That means to vomit until you pass out from exhaustion.)

I came (ha!) to with Seth’s nutsack in my mouth.  It tasted like really shitty sweet and sour sauce.

“Dude!  What the fuck is with your genitals and my face??  This is highly inappropriate!  I’m not even a football fan!”  (Ba-dum-tish!)

“They’re magic.  All my magical powers are concentrated in my loins.”

“Well…fuck, I mean…whatever.”  I plucked a pub from betwixt my teeth.

I unrolled the parchment, picked up the quill and wrote this:

And so, thusly doth the great Prophet, Messiah, and All Around Froody Dude Seth Putnam speaketh and sayeth unto me, Phro, his first and most handsomest disciple…

“What the fuck are you doing?”

“Just trying to dress it up a bit.”

“It’s not your 10 year old cousin that you took to the senior prom.”

He cock slapped me.

“Just…”  He sighed like Rosie O’Donnell’s ego was having dirty pig sex on his back with Danny Devito.  “Just write what I tell you to write.”

Back in the day, when the cosmos were young and not even a lyre graced the heavens with melody, the metal gods knew the glory to come.  They set the orbs in motion and let bolts of lightning crack through the air.  They directed the evolution of humankind—giving us fingers to riff with, hearts to rage with, and heads to bang with.  They pushed molecules here, tweaked nipples there, passed divine inspiration everywhere, and chopped fingertips just to give birth to metal through the only slightly cognizant birth canal of Black Sabbath.

And there was much rocking and rejoicing as dun-dun-dundun-duuuun ripped through the lands.

But darkness and rockingness spread by the metal gods fell to ruin as hipsters and prudes looked down on their beloved fun and partying and horn-throwing.

In despair, they called for a savior—a foul creature who knew neither restraint nor purity—a monstrosity of just absolutely vile shit—Seth Putnam.  (“Hey, that’s you!”  “Shut up.”  “Sorry.”)  From the backed up toilets of the Great Vomitorium In The Sky, I fell, stinking and cursing, to the earth below.  As I walked the earth, I drugged, drank, fucked, and did and said all the horrible things I possibly could.  I lived the sin all the chuds were too weak to survive.  And, at last, when my body was little more than a sack of crap and semen to be filled with heroin and hate, my crusty, chapped heart stopped and I was brought back to the Great Vomitorium In The Sky.  I died for your lack of sin.  So, say thank you, you little cunt face.

He grabbed my tits and spit in my face.

“Say it and mean it!

He donkey punched me in the kidneys.

He started to unzip his pants.

“No!  Get back!  I don’t need your magic cock, I’m sure the blood I’ll be pissing for the next week is some sort of health cleanse or something…urg…umm…look, so is that it?  It’s pretty short for a gospel, isn’t it?”

He shrugged.  “So were my songs and the time it took me to fuck your mom in the armpit and conceive you.”

“Who’s the goddamn messiah here??”  His eyes flashed flames and he reached for his zipper.

“Like, umm…Phil Vane from Extreme Noise Terror.  Hey?  You know, good old grindcore?  What the fuck, you guys couldn’t keep him alive for a bit longer?”

“Look, we don’t get to keep people alive.  We can choose if we wanna kill them dead and shit, but if you end up dead, not our fucking problem.”

“Well, that guy was pretty fucking metal….what’s he doing now?”

“He hangs out in the Great Vomitorium In The Sky, fucks groupies, and eats shitty tofu.”

“He was a vegetarian.  What the fuck, you didn’t know that?”

“I’m not sure what a vegetable is….  Well, alright, how about Cory Smoot, Flattus Maximus, from Gwar???  How fucking metal was that guy!!!  What’s he up to now?”

“Yeah, I’m in Japan.  I think every anus in the nation puckered at the thought of some crazy North Korean general going batshit and punching nuclear launch codes.”

“Shut up, you fucking indignant cry baby.  So, right, Flattus was super fucking metal, so the metal gods allowed him a dying request.  And I’ve had this crazy idea ever since I got fucked up on acid and blow and tried breaking into an Air Force base: how awesome would it be to take a dump in that tiny cumstain’s mouth and then tea bag him?”

“Why wouldn’t you do it the other way…”

“Shut up, diaper nugget.  So, when Flattus kicked the bucket, I came down all angelic like and shit with a few bottles of Vomitorium moonshine and we got fucked up and passed out for like a goddamn month in a sewer in Hong Kong.  The teleporter was all jacked up, so I missed Pyongyang by a mile or whatever.”

“Anyway, we got the teleporter working and popped into his little private train, dropped trousers and just covered everything in the smelliest, grossest, loosest shit you’ve ever seen.  It was like molasses run through a firetruck’s water pump…but with chunks.  Then, we strapped lil’ Kim down and tea bagged him so hard he died of shock.  Then, cock-slapped him back to life and did it all over again.  Hahaha!  That little maggot cried like a little kid watching his daddy get fucked by an angry donkey.”

He fell down laughing.

“Have you….have you actually seen a man get fucked by an angry donkey?”

He stopped dead and stared at me seriously for a moment.

“There are some things in the Vomitorium…things you think you want to see, but only after you’ve seen them will you realize the horrors you’ve unleashed on your own subconscious.  Still…who can say no to a donkey show??”

“Alright, so what about Michael Burston, the old guitarist for Motorhead?  What’s his place in the Vomitorium??”

“He does a ton of psychedelics, writes songs that make panties turn into cotton candy, and then proceeds to eat the shit out of those panties.”

I stared at him.  “Okay, so…what about Scott Columbus?  The old drummer from Manowar?”

“Mostly he walks around in a loin cloth with a giant hammer that he uses to kill imps, trolls, and deathcore drummers.  Then, he’ll go pound some steel, forge it into a giant sword, and go kill some dragons.  Then he uses the dragon scales to make armor…though no one is really sure what the armor is for…  My money is on him using the armor like a giant body condom…but I haven’t found a vajayjay big enough for that to work yet.”

“Well…that’s…interesting…so, if your followers die, what do we get?”

Then he cock-slapped me so hard it knocked a tooth out.

One can only assume 2012 will not be any better.

12 Responses to “THE GREAT VOMITORIUM IN THE SKY”