We first stumbled across King Giant in September 2010 because of the ass-kicking video for a song called “13 to 1” off their 2009 album Southern Darkness, and wrote about that here. A few months later, they released a performance video for another Southern Darkness song called “Solace” — and we had to write about that one, too. Yesterday, the band released the first video for Dismal Hollow. It was produced and directed by Kevin Barker (who also made those previous KG videos) and funded by the band and their fans through Kickstarter (I’m proud to have chipped in for that project myself). It’s fuckin’ great.

The video is for a song called “Appomattox”. Lyrically, the song is about the killing fields of the American Civil War (“if blood was money — the soil would be wealthy”), but the video puts an unexpected visual spin on that tale of a people turned against themselves. Yeah, the video is about fucken zombies. It’s extremely well-done, worthy of a cinematic release — and worthy of the great music in this song. Watch it here:

In 2011, Sweden’s Cipher System released their first album after a 7-year hiatus — Communicate the Storms. TheMadIsraeli reviewed it for us here, praising it as a “melodeath sledgehammer to the face”. With respect to the title track, he wrote that it “grooves with melodic fury”, with “some serious stomp and absolutely great riffs”.

Yesterday, the band released an official music video for that same song. This one was made by the always dependable Patric Ullaeus. There’s no story here, just the band performing the song, but the guys get into it, and the lighting, photography, and editing are all quality. Check it out:

If you’ve ever seen a DEP live show, I’ll venture to say it’s an experience you won’t soon forget. “High energy” doesn’t really begin to describe the experience. The guys up front fly around the stage like they’ve been injected with jet fuel, climbing up on shit, leaping down on shit, hurling their instruments around like weapons — how they emerge unscathed is a mystery.

I got an e-mail from DemiGodRaven about a video of DEP’s performance in his hometown of Sacramento, California, last November that recently surfaced. I’ll let him set the stage for it: 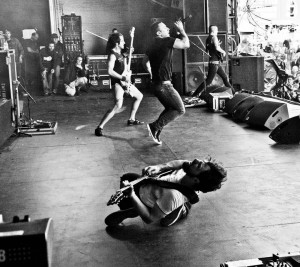 “I love the guys at Capital Chaos. They’ve been working hard to prove that Sacramento has a worthy metal scene and have been one of the few operations who are able to consistently film live shows out here. If you’ve seen some professional live footage lately, there’s about a 20% chance that it was captured by those crazy ass mo-fos. A lot of venues are simply content with streaming their shows live and I love them for it, but I love that Capital Chaos archives either the whole show, or just a few songs.

“Back in November I had the pleasure of seeing Mastodon, Red Fang, and The Dillinger Escape Plan at our relatively new venue Ace Of Spades in downtown Sacramento, and the guys from Capital Chaos were there filming the show. So it basically has been a waiting game since then to see if they would post anything from it. Mastodon was put up damn near soon after the show, but the rest of the stuff has been waiting quietly in the hopper for various reasons.

“They finally were able to post some footage of Dillinger Escape Plan absolutely tearing it up on stage, and hopefully this signals that they’ll be able to post the whole show soon. Until then, enjoy their insane brand of chaos and try to see if you can spot me. Remember, I’m the long haired guy in black with the goatee. Should be easily recognizable. ~DGR”