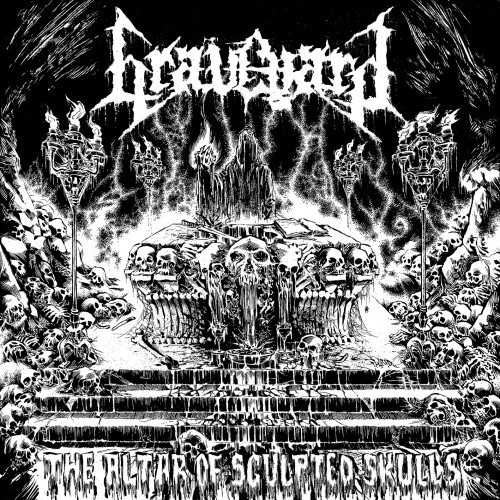 This is a SHORT BUT SWEET feature, but it could just as easily have been an EYE-CATCHERS feature, because . . . that album cover! Be honest: It caught your eyes, just as it did mine.

It’s in the only acceptable kvlt colors — black and white. It has countless skulls. I know this because I tried to count them and I couldn’t do it before I ran out of fingers and toes to count on. That makes the number of skulls countless. Plus, everything is dripping, even the words. And you don’t need color to know what they’re dripping with, and it’s not honey. Then you have the evil-looking candelabras and the ominous hooded figure standing behind the ALTAR OF SCULPTED SKULLS!

Kudos to the artist, Matt ‘Putrid’ Carr (Autopsy, Impetigo, Coffins, Hooded Menace, etc), for this dread-inspiring achievement. It’s everything you want as a visual introduction to your spine-extracting, skull-bleaching, morbid death metal — which happens to be the musical content of Altars of Sculpted Skulls.

That’s right, this is most definitely not the Graveyard that produced all that retro-stoner-doom rock on Hisingen Blues last year. That was the Swedish Graveyard. This is the Graveyard from Spain, the band who released a 2009 debut album called One With the Dead plus an early demo, a previous EP, and an assortment of splits — and the band who, in Altars, have created what is rapidly becoming my favorite old-school death metal release of the new year. Every song is a gem — black diamonds in the rough. 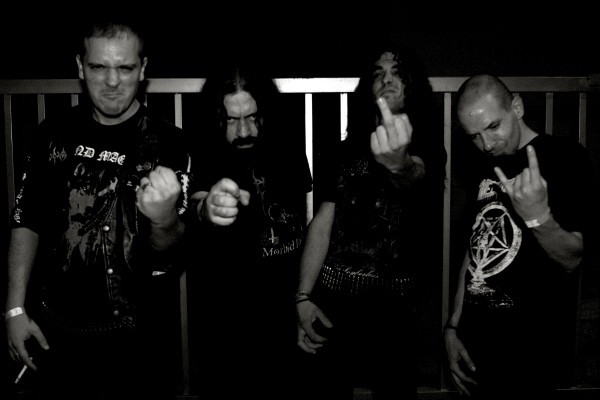 The new EP includes six songs. Two of them are re-worked versions of earlier songs and four are new. The template for the music was set more than 20 years ago by seminal Swedish bands such as Carnage, Dismember, and Entombed. The template can be altered, of course (and has been), but it may be one of the few blueprints of extreme metal that really can’t be improved upon: If changed by much, the music simply becomes something else rather than a better version of the original sound.

Perhaps that recognition is what has driven most of the Swe-death revival bands of the last half-decade to attempt nothing more than a faithful homage to the founding fathers. Some succeed in capturing the feel of the bands who inspired them, and some don’t, but even the best of the mimics leave this question hanging in the air: Why pay attention to a talented imitator when you can still listen to the originators?

Part of the answer is that although the musical style may be utterly familiar, new songs are still new songs, and if the new songs have staying power and replay value, then they’re worthy additions to your library. I think the rest of the answer lies in small things, because — to repeat — big changes mean you’ve torn up the blueprint and simply built something else. 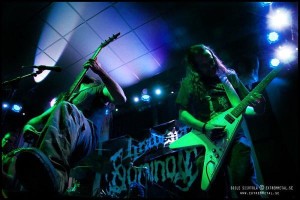 On The Altar of Sculpted Skulls, Graveyard achieve success in all these ways:  They do a brilliant job of capturing the sound and feel of the original music; they’ve created memorable new songs that are likely to have staying power; and they’ve added small touches that make it worthwhile to interleave their songs on your playlist with those tracks from Into the Grave and Like An Ever Flowing Stream.

Those touches include effective use of tempo dynamics, both within songs and from one song to the next. For example, the opening title track starts as a thrashing upheaval and then progressively becomes slower and slower, and increasingly morbid in its atmosphere, before the speed accelerates again at the end. “Cult of Shadows” crawls at a doomed pace from beginning to end but is followed by the chaotic gallop that begins “Ritual”, before it too drops into an Asphyx-like pit of death-doom.

Other examples of those small, sickly sweet touches:  The use of a high-pitched lead guitar to accent the massive rhythms and to spool up dynamic solo’s that are never exactly the same in style from one song to the next; the dramatic, almost cinematic instrumental overtures that begin “An Epitaph Written In Blood”; the organic switch in drum rhythms from d-beats to rock beats to brutal pounding where the changes best suit the changing dynamics of the songs; the leonine roar about halfway through “Deathcrowned” that signals a change in the song and the beginning of a vertebrae-breaking headbang fest. 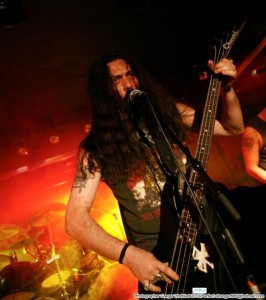 I come back to that “Cult of Shadows” song. As an instrumental track, it’s a surprising stand-out on the EP. The rhythm part of the song begins and ends with a simple, four-chord progression that moves ever so slightly up and back down the scale, accompanied by a repeating drum motif, with a different progression in the song’s middle section. That up-register lead guitar then works its magic over this heavy foundation, beginning with an almost stoner-doom, bluesy melody at the beginning and then moving into an eerie atmospheric workout for the balance of the song.

I also need to single out the vocals: They are gargantuan, echoing, utterly galvanizing torrents of crypt-dwelling bestiality.

In a nutshell, Graveyard remind us why there is still life in death metal.

Here are two tracks to give you a taste of Graveyard:

“An Epitaph Written In Blood”

[audio:https://www.nocleansinging.com/wp-content/uploads/2012/02/02-An-Epitaph-Written-In-Blood.mp3|titles=Graveyard – An Epitaph Written In Blood]

The Altar of Sculpted Skulls was released in CD form by the viciously dependable Pulverised Records on February 6 and can be ordered from them here. The EP was originally released on vinyl in July 2011 by Doomentia Records. You can find Graveyard on Facebook here or on their official site at this location.

2 Responses to “SHORT BUT SWEET: GRAVEYARD – “THE ALTAR OF SCULPTED SKULLS””