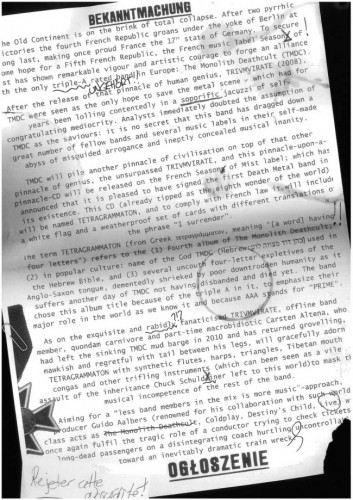 Only four days ago we decided to snoop around and see what we could find out about the nefarious machinations of one of our favorite death metal bands — the mysterious, often brutal, often comedic Dutch maniacs in The Monolith Deathcult. You can read what we learned through our sleuthing in this post, which includes demo tracks that may or may not become part of the band’s new album, TETRAGRAMMATON (like I said . . . mysterious).

Today we learned about developments that will be of riveting interest to TMDC fans. Some of what we have to report is officially confirmed, and some of it is . . . of mysterious origin. The first bit of news seems to be official, since it appeared moments ago on the TMDC Facebook page. It concerns the band’s signing by Dutch-based TMR Productions. I’m pretty sure the wording of the announcement will also give you some chuckles.

The second piece of news . . . not yet officially confirmed, arrived by way of a scrap of paper that drifted through the window of the NCS editorial offices from the opened claws of a member of the NCS carrier pigeon aeronaut squadron, who serve our needs for the timely delivery of important news, as well as pigeon droppings. If this is to be believed, TMDC have been signed to a global deal by Season of Mist for the release of TETRAGRAMMATON.

An image of that scrap of paper, which appears to be a draft announcement of some kind, appears at the top of this post. A larger, more legible version can be viewed after the jump.

First, here is TMDC’s announcement of the promotion deal:

After years of being ignored by festivals and booking agencies, Dutch-based TMR Promotions has had the courage to add The Monolith Deathcult on their artist roster.

Analysts stated, ”we have no doubt that TMDC’s snobbish behaviour, catastrophic live shows and complete disrespect for the genre caused this 10-year boycot, but they have done it again. 400 years after the abominable slave trade, the Dutch have finally found a way to push another atrocity unto mankind. Sooner or later our children will ask: “How Did This Happen?”

And now here’s a blow-up of that scrap of paper: 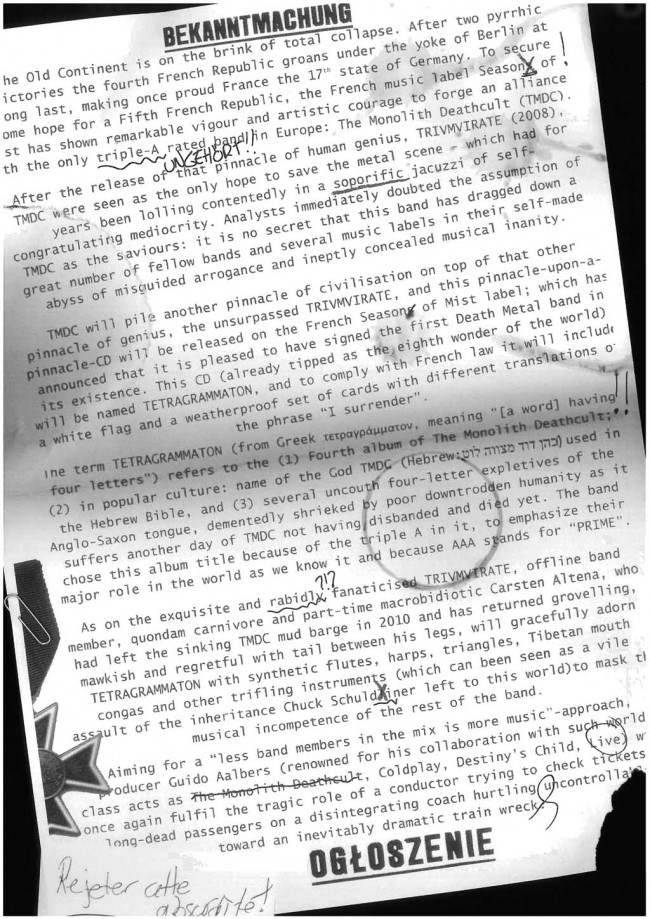