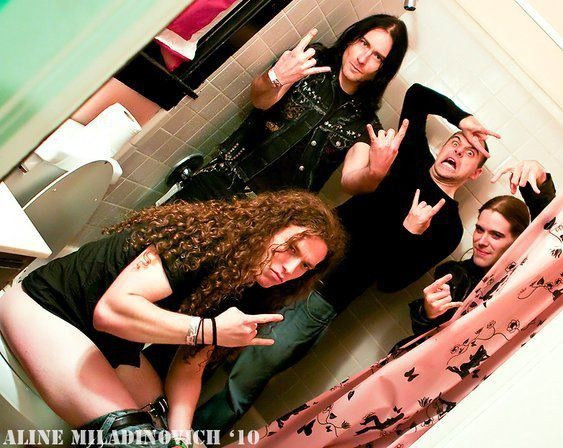 You know a band is close-knit when they share the experience of man-sized bowel movements. But can they rock as well as they can roll?

It’s been a little more than two years since Arsis released Starve For the Devil. Since then, the band have undergone some changes. Bass player Noah Martin re-joined the band, and less than two weeks ago, it was revealed that guitarist Nick Cordle had departed to replace Christopher Amott in Arch Enemy.  James Malone was forced to sit out the band’s “Frets of Fury” tour last fall “due to professional and personal commitments” — but Malone is back in harness, and Arsis are working on a new album for release either late this year or early 2013.

As proof that Arsis are still rocking on despite the line-up upheavals, today Guitar World premiered a pre-production demo of a new song called “Choking On Sand”.

I don’t think fans of Starve For the Devil will be disappointed.  Continuing the trend on the last album, this song is more melodic death metal than tech-death. Malone’s blackened rasp will be familiar, as will the Gothenburg-style riffs, and the song includes a shrieking melodic solo as well as healthy doses of double-bass pummeling. Check it out following the jump.

One Response to “NEW MUSIC FROM ARSIS”