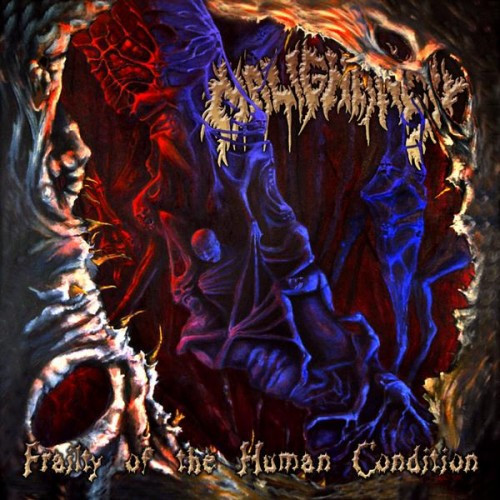 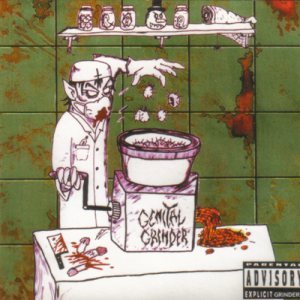 The cover art is the type of amateurish cartoony obscenity that seemed popular with French bands of the time and depicts exactly what you’d expect from a band named after my favorite Carcass song. The song titles are all over the place between English, French, and acronyms, giving the overall first impression that this is some type of typical loose-knit noisecore operation at best. Instead what you get is airtight “spacey” sounding Death Metal in the Florida tradition, with outstandingly deep and guttural vocals. What makes things interesting is how GG frequently shrug off the atmosphere set by their stoic and relentless metal assaults with low-brow toilet grind humor similar to Viscera or Gut. Definitely for fans of the old Czech band, Hermaphrodit, if anyone remembers them.

Around the late 90s/early 00s there were a lot of Czech bands pushing the limits of what you could do with machine-gun blastbeats and guttural vocals. One such group of experimental grindfreaks was Alienation Mental, who broke the Internal Suffering-like frenzy of pummeling snares with an oddball flair for nu-metal that manifested itself in grooves that ended up sounding something like Devourment covering Korn, sped up to Cryptopsy tempo. Though on later releases they would cross over into mall-metal territory a little too much for comfort, on this debut full-length it provided for an interesting and unique rhythmic contrast to the over-the-top grinding they threw around with ease.

For some reason I have heard people dismiss this album as not being as extreme as previous releases.  The only difference I hear is that this was one of the rare instances when they actually had a production value on par with a band of their stature and credibility. As usual, Antimo delivered a flawless and incomparable vocal performance of demonic exorcisms, channeling the most disturbing moments of every photocopied demo with a corpse on it and putting us all to shame. The Carcass-like goregrind romps are there, as are the epic breakdowns of impending doom – this was classic Mexigorge, true to form doing exactly what they did best.  I can see why many cult gorehounds were expecting them to top the bare knuckles obscene art and cult “tin can” sound quality of Forensick, but this was a solid professional album and a welcome relief after countless years of brilliant subtlety melting away in analog hiss.

Phew, for some reason those boys in Holland and the Netherlands love their lo-fi gore/noisecore, and none more than my friend Marc  – consistent long-time member of international old-school goregrind legends Last Days of Humanity, and also the mastermind behind this disgusting masterpiece. I guess L.D.O.H. was just too melodic and emo for Marc so he had to step it up a notch and create something that sounded like Mortician on overdrive with vocals like an octopus drowning in a bucket of clam chowder.

What I would say set this apart from the sea of other one-man drum machine goregrind bands is the very thick, furnace-like production. Most of the time this type of music was relegated to pisspoor production value and home-dubbed tapes (anyway, in the 90s), and Marc managed to capture the brutal depth and sound clarity of a big Death Metal band and apply it to his bedroom-studio style noisecore project. Anybody disappointed in the lack of real gore in the artwork on that Disgorge album could get their fill with this lovely pro-printed, jewelcase cd full of horrible, horrible things. 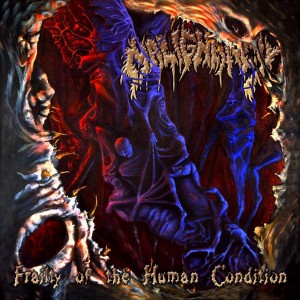 True to form, NY’s beloved, beleaguered heroes of technical sewer-pipe Metal, Malignancy, demonstrated their international underground appeal by co-signing on a split with then (and still)  little known Czech grinders, Intervalle Bizzare, who tauntingly began their set with an unmistakably signature Malignancy-style pinch harmonic riff, but then went  into an epic, blurry hyperblast that called to mind the dynamics of older Kataklysm and the grind of Brutal Truth. If I have to tell you who Malignancy is, then I can’t help you, brother. Really interesting technical Death Metal from two bands who never got the credit they deserve for talent, originality and dedication to craft.