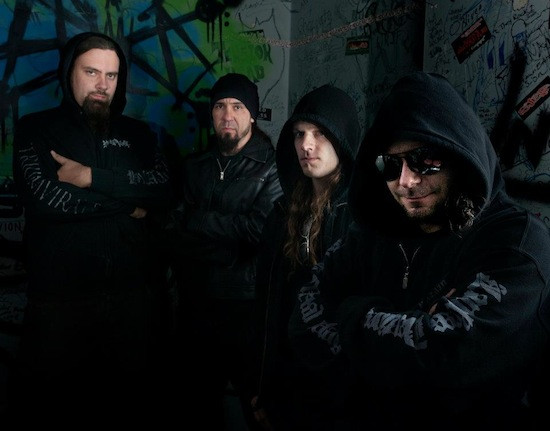 Goatwhore’s 2009 music video for “Apocalyptic Havoc” is one of my all-time favorites. It’s not terribly fancy, though it’s well-made. There’s no story. It’s just the band playing in something that looks like the interior of a church (except for the inverted crosses), with assorted close-ups of spark-shrouded Ben Falgouth looking badass (which is not difficult, since I bet Ben Falgouth looks badass even when he’s asleep) and Sammy Duet looking serious and cool, carving those tasty riffs with the neck of his guitar almost vertical.

I’m sure the song has something to do with how much I like the video. To be honest, Goatwhore could have been filmed playing dominoes and eating shelled pecans in a NOLA icehouse and I still would have loved it, as long as “Apocalyptic Havoc” was blasting out of the speakers.

But now Goatwhore have gone and gummed up the video works. Yesterday, we witnessed the debut of the video for “When Steel and Bone Meet”, which is a track on their most recent album Blood For the Master (reviewed here by Andy Synn). They could have just let the song carry the video again, as they did for “Apocalyptic Havoc”, because the song is great. To borrow Andy’s word, “When Steel… is a bar-room brawl set to music, chains and fists flying in a drunken, grooving orgy of violence that manages to cram in a swaggering groove, pummeling power-riffage, and some switchblade soloing in barely more than 3 minutes.”

But no, they had to throw in brief shots of two unclothed chicks licking blood off each other. I mean, really, who wants to see that? Bor-ing.

Thanks to Bloody Disgusting for premiering this.

9 Responses to “GOATWHORE, “WHEN STEEL AND BONE MEET”: THE VIDEO”