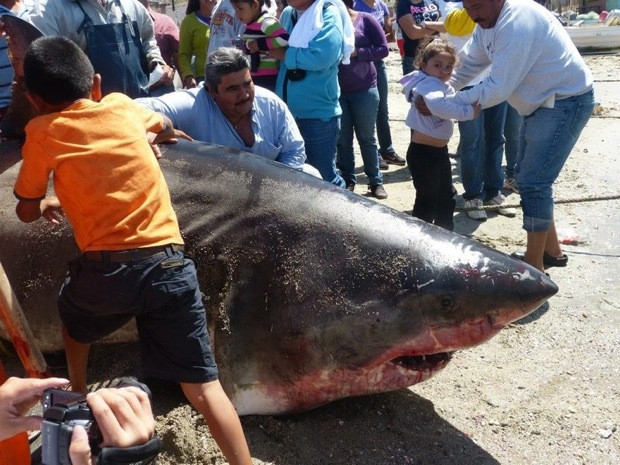 This photo seemed appropriate for this post. (Thanks to Alfonso for sharing it on FB.) It’s a pic of what two fishermen pulled up in their net from Mexico’s Sea of Cortez on Sunday. Fortunately for them, it was already dead. This Great White shark measured almost 20 feet long and weighed an estimate 2,000 pounds. It took 50 people to help pull the carcass ashore. More details can be found here.

And that’s about all the introduction I can afford for this post, except to say that I’ve rounded up a bunch of new flesh-eating music and am throwing it at your head. Here’s what I caught in my net, in no particular order:

New videos from Cryptopsy (Canada), Fester (Norway), Mordbrand (Sweden), and In Mourning (Sweden), plus new songs from Carach Angren (The Netherlands) and Antigama (Poland). That ought to hold you . . . and eat you. (To learn more about each band, click on their names.)

“Benedictine Convulsions” is a track that appeared on the Cryptopsy album None So Vile (1996), back when Jon Levasseur was with the band. Of course, Levasseur is now back, and Cryptopsy is working on a new album, praise be. In this new video, Levasseur and drummer extraordinaire Flo Mounier play the song and discuss it.

Fester is a black/death metal band originally founded in 1989. They have a new album out now on Abyss Records with the title A Celebration of Death. It rips hell. This is a new video for a song from the album called “The Black Tower”.

Mordbrand is a thoroughly awesome three-man death metal band from Sweden who we’ve written about frequently at NCS, most recently here. The following is a vid of a live Mordbrand performance (their live debut) in Falun on April 14. The song is called “Eaters of the Void”. Mordbrand were assisted in this performance by members of Volturyon and Livet Som Insats.

TheMadIsraeli reviewed this band’s stunning new album, The Weight of Oceans, here. Today I discovered this new official video for the song “A Vow To Conquer the Ocean”. Man, this is a good song.

This very good Dutch band has a new album called Where the Corpses Sink Forever scheduled for release on May 18 via Season of Mist. Today, they released the second track from the album for streaming. It’s called “Lingering In An Imprint Haunting”.

I’d lost track of these Polish death/grind bastards whose previous music I’ve enjoyed, and only recently found out that they have recorded a new six-song EP titled Stop The Chaos, which will be released on May 18 through Selfmadegod Records. In recent days, they released a song from the album for streaming. It’s called “The Law”.

As always, enjoy the rest of your fucking day. We’ll come up with something toothsome for tomorrow, too.