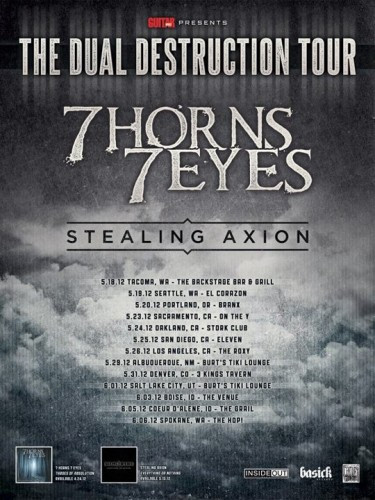 When it comes to Washington State metal bands, my objectivity could be questioned, because I live in the Seattle area. But that’s only because you don’t know me well enough. Fact is, when it comes to the metal, I don’t think about the music of Seattle or Tacoma bands any differently than I do bands from California or New York or India or Europe or anywhere else. Yes, I have a chance to see them perform live more often than bands from elsewhere, but I won’t change my rule: I only want to write about bands I feel I can honestly recommend.

And I’m not bending the rule when it comes to 7 Horns 7 Eyes or Stealing Axion. They are extremely talented bands making music that ought to be heard far and wide. So, from my perspective, it’s extremely cool that these two bands have managed to arrange a tour together, sponsored by Guitar World. It’s called the DUAL DESTRUCTION TOUR, and I expect that’s what they’ll bring — destruction.

We’ve reviewed both of these bands’ most recent releases (7E7H here and Stealing Axion here), and in fact we got the privilege of streaming the new 7H7E album. But we have two more things to throw your way today, besides the tour schedule, which is still being expanded (see the current schedule after the jump).

First, we have one pair of tickets to give away, courtesy of Century Media, in a market of the winner’s choice. I’m going to make this contest really simple. Send me your name via e-mail to islander@nocleansinging.com. I will put each name on a slip of paper and put all the paper slips in a bowl. Rather than smoking all the slips, I will instead ask my non-metalhead wife to pick one of the slips from the bowl, and her pick will be the winner. I will then smoke all the rest of the slips. This contest will end at midnight, Pacific Time, on May 11, 2012

True story: this ticket offer came my way from Century Media minutes AFTER I wrote the balance of this post. If that’s not a freakishly felicitous coincidence, I don’t know what is.

Second, I have for you a play-through video by Stealing Axion drummer Blake Ferris. Watching and listening to this video brings to mind a question I have about skilled metal drummers every time I get a bird’s-eye view of their performances: How they do this?

First, they have to keep time. This is not a talent that everyone is born with. I have regularly seen people listening to music whose physical movements are embarrassingly out of sync with the rhythms of the music. I know you’ve seen that, too. Mainly, these people are our relatives.

Second, they have to change rhythms on a dime.  The last time I changed anything on a dime was when I bought a bubble gum ball out of a dispenser back when Reagan was President.

Third, they have to hit all these things that are clustered around them like new-born piglets trying to get a prime suckle position on a sow’s teets. (Yep, that was a piss-poor metaphor, but it’s the first thing that came to my mind, and I’m goin’ with it.) All those things are round, and they have to be hit in the right order, and they make different sounds depending on where you hit them within their circles. And in metal, you generally have to hit them pretty fucking fast.

Getting a uniform sound out of all those round things is easier when they’re triggered. I have no problem with triggering — it’s just another version of technology, which is everywhere in metal these days, and it’s used to make sounds more pleasing to a listener’s ears, and that’s cool. But I don’t think Blake Ferris was using triggered drums when he did this play-through, so that’s even more cool.

Fourth, when you’re in a band creating original music, no one gives you a script. You have to invent the drum/cymbal progressions yourself, in a way that complements and enhances the rest of the music. I believe this is called “art”.

And sixth, you have to remember what the fuck you’re supposed to do over the course of the song. Granted, I’m sure you can get away with mistakes in a live performance, because everything in a metal show is so damned loud. But in a video-taped drum play-through, you’re pretty fucking exposed.

This is Stealing Axion’s song “Everything Or Nothing”, from their self-titled 2010 EP:

And here’s the tour schedule as it stands as of this writing. Watch those 7H7E and Stealing Axion Facebook pages for tour updates (you’ll find the links the first time the band names are mentioned in this post).

One Response to “THE DUAL DESTRUCTION TOUR: 7 HORNS 7 EYES AND STEALING AXION (AND A FREE TICKET GIVE-AWAY)”