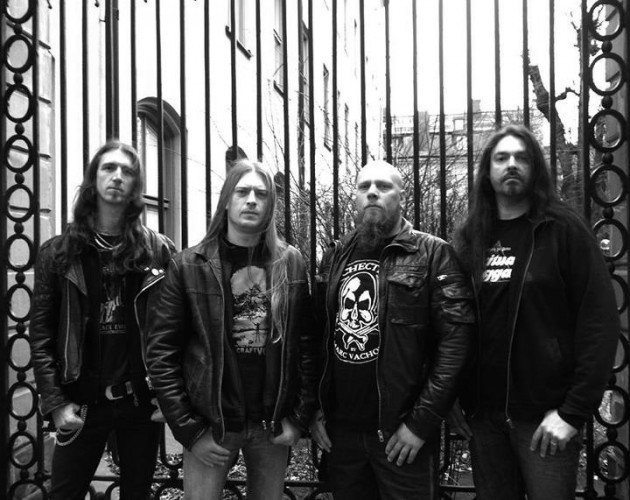 And speaking of grisly old-school Swedish death metal, I received through the ether an electronic copy of a new EP from Mexico’s Zombiefication called Reaper’s Consecration. I’ve only listened to two of the five tracks so far, but it is a fucking brain assassin, and the EP includes this sweet cover art designd by the band’s vocalist Mr. Hitch: 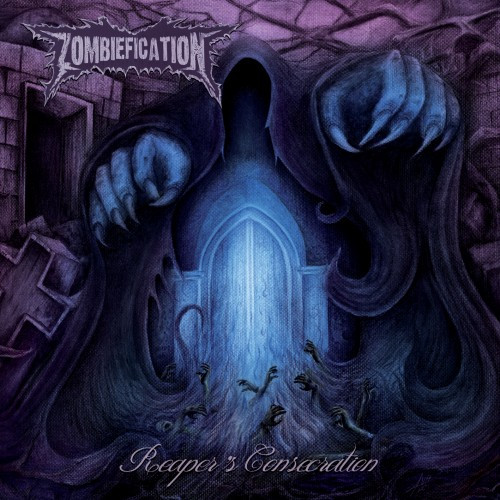 I first came across Zombiefication back in the spring of 2011 and included them in a post about Mexican metal. I had high hopes for this EP based on what I’d heard before, and based on what I’ve heard up to now, these ghouls haven’t disappointed with their new EP. Here’s a track that the band’s Mexican label, Chaos Records, has been streaming on SoundCloud. It’s part Autopsy, part old Entombed, and part maggot swarm. Very nice.

Chaos has licensed Pulverised Records for worldwide distribution of this EP, and it’s scheduled for release on July 9. 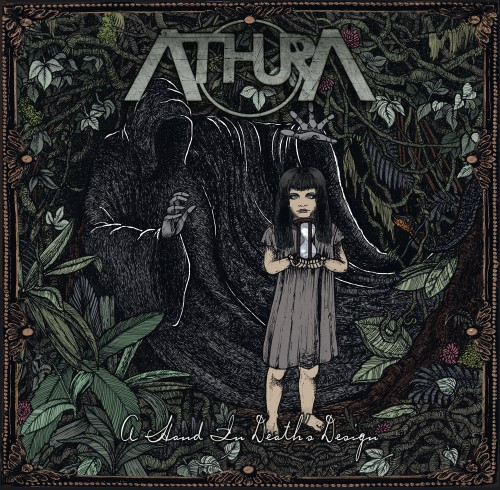 I also heard a song called “Unlearning” by a band from Plymouth in the UK by the name of Athura. You wanna talk about bringing the massive freight-train groove! This baby hits 11 on the phenumatics dial right from the starting gate and doesn’t stop until it has blown through your eggshell cranium and sucked all the yoke out in its wake. Flashes of melodic lead guitar swirl around like streamers and the vocalist yells and growls with some genuine voracity.

The band has given me the chance to hear the whole album, and “Unlearning” has gotten me kind of slobbery in anticipation of the experience. The album is titled A Hand In Death’s Design, and the band is accepting pre-orders now on Bandcamp (here). A pre-order will get you an immediate download of two tracks from the album — “Unlearning” and “Drown What You’ve Become”. It will be released on July 30. Here’s “Unlearning”:

I saw a fan-created video for a song from of of my favorite albums from 2011, Rengeteg by Thy Catafalque (reviewed here). The song is called “Holdkomp”. It’s an instrumental track, and probably the least like any other music on Rengeteg — sampled mechanical noise and sounds of roaring, pulsing, droning electronica; a ratcheting synthesizer beat and a chiming guitar melody; industrial propulsiveness with a prominent bass line; and a finish that features the distinctive distorted guitar tone that runs throughout the album.

Whoever created this video had a flash of inspiration — edit together excerpts from the movie Tron:Legacy (2010) and sync up the excerpts with “Holdkomp”. Fun to watch and fun to hear. Unfortunately, I can’t embed it because embedding has been disabled on YouTube. But you can watch it via this link:

You can stream and buy Rengeteg on Bandcamp here. 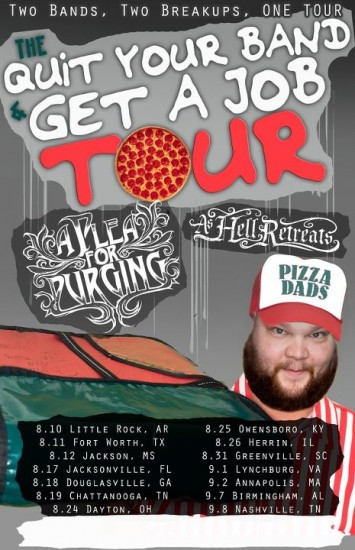 I saw this announcement by Nashville’s A Plea For Purging on their Facebook page:

“PLEA will be playing our final U.S. shows alongside, long time friends, AS HELL RETREATS in August and September of this year. The run has been dubbed the “QUIT YOUR BAND AND GET A JOB TOUR.” The last seven years have been amazing. Come have one more party and a few more stage dives with us at one of these final shows.”

So yes, A Plea For Purging is calling it quits as a band. As Hell Retreats, another Tennessee band, announced recently on their FB page that they were were going on “indefinite hiatus” after seven years together. So they’re going out together and giving their fans a one last chance to see and hear them before they disappear. 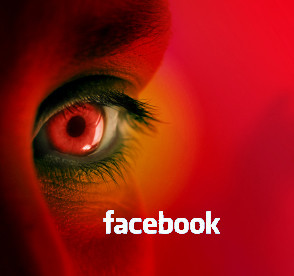 And on that shitty note, we can now turn to the subject of Facebook’s new “pay to promote” feature. I won’t spend much space on the subject here, because I went on at considerable length about it yesterday. In a nutshell, Facebook has recently disclosed (in a way that’s certainly more visible than any previous disclosures), that when people who have Facebook pages post on them — as A Plea For Purging did yesterday — not everyone who has liked that page will see the posts, because Facebook filters out numerous posts from the news streams of Facebook users. In fact, it appears that when someone posts on their Facebook page, significantly less than half of their fans will see the post in their news feeds.

However, you can pay Facebook to share your posts among more of your fans. I did that for the first time yesterday, as an experiment. I put up a post on the NCS Facebook page providing a link to that article I wrote yesterday on Facebook’s new “pay to promote” policy, and I paid $10 to Facebook so they would promote my post for a period of 3 days, i.e., so they would provide the post in the news feeds of more of the people who like the NCS page. Actually, I could have done that for $5, but for $10 Facebook estimated that my post would reach an even higher number of people. I’m still not sure what they do to achieve that higher number of “people reached”.

Actually, I did more than pay $10 to “promote” my post. In order to pay Facebook, I had to give them a credit card number. But to give them a credit card number, FB also required me to create an Ad — which I presume is one of those things that show up on the right side of Facebook pages. So I paid them $10 to create an ad for my post about the article I wrote on the “pay to promote” policy. I haven’t investigated how FB decides who will see Ads at the level of a $10 expenditure. Anyway, after I gave FB my card number and bought that $10 Ad, I “promoted” my post about the “pay to promote” article on NCS, at a cost of another $10.

I did this approximately 17 hours ago. So far, here are the results: FB tells me (if you can believe them) that my post has reached 6,330 Facebook users, including 44% of the people who like the NCS Facebook page. I’m not clear whether that 44% number means that less than half of the people who like NCS have logged on to FB since the post went up or if FB is still restricting the distribution of my post to fewer than all of the NCS fans on FB.

I’ve also seen a big jump in the number of unique visitors who have read the article on this site — Google Analytics tells me that more than 1,700 unique visitors have viewed my article so far, which is significantly larger than the average number of people who view an NCS post on its first day of appearance. And that number is probably low (as I found out from a comment by .jh on yesterday’s post), because some browsers allow users to disable tracking of their web browsing by companies like Google.

I have many thoughts about this experiment and what it’s showing, but I’m going to try to learn more before expressing them — I’ll leave that for another day and another post. Plus, I’ve still got more than 2 days left on my paid promotion.