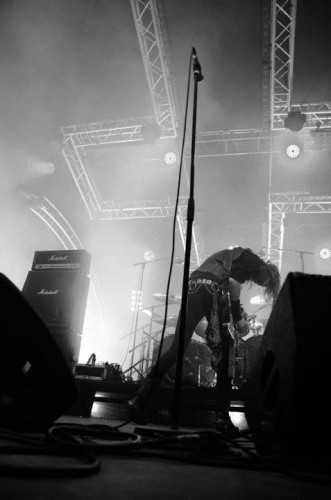 Earlier today, we posted about a series of high-quality performance videos from the French HELLFEST 2012 festival earlier this month. Iceland’s Sólstafir performed at HELLFEST, but their set isn’t included in the collection featured in that earlier post. But some blessed filmographer just uploaded a video of them anyway.

The song being performed is “Fjara”, and as persistent readers are well aware from all my previous blathering about the song, it’s one of my favorite songs ever, of all time, world without end, amen. Fortunately, this video is of high quality, both in the visuals and in the sound. Among other things, it makes the bass drum and the bass guitar sound super-FAT, but the guitars still ring like heavenly chimes.

I don’t think I’ve expressly said this before, but I think Sólstafir are just incredibly cool on stage. They just have to stand there and bob a little on a slow, powerful song like this one, and they still just look so damned cooooool, including the way Aðalbjörn Tryggvason plays his guitar while bending from the waist like a weeping willow. He’s got an amazing voice, too — love the way he moves from the melancholy crooning to the gritty blast of the chorus.

Man, I’m really coming off like a girly fanboy, aren’t I?  I’ll just shut up and direct you to the video after the jump.