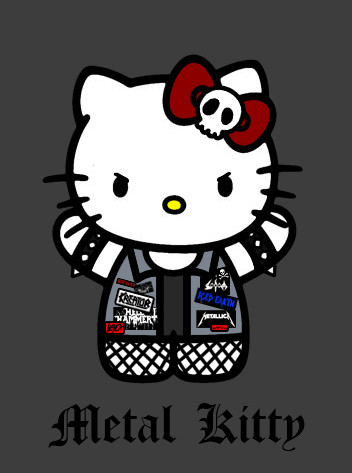 “Metal Kitty” by bloodspit.
(This post was written by Phro. He brings us head asplody things.)

In the metal world, there seems to be a lot of anger, hate, filth, and skullfucking. I approve of this. In fact, I approve of this so hard that I sometimes get rage boners for no other reason than that I love how much negativity there is in the metal world. That said, a bit of humor goes a long way to making a good band a great band. And a shitty band an almost tolerable band.

But what we don’t have (for better or for worse) is much cuteness.

Now, that’s to be expected when you get a lot of misanthropes, bitter assholes, badasses, and posers all in the same general area. (I’ll let you decide for yourself which one of the four you are.) But, hey, it’s the weekend, so you have some free time to remove the corpse paint, take off the studded bracelets, hide in your room, and indulge in a little childish, high-pitched squealing and giggling.

Baby Metal has released a new video. I love it. I’m not being ironic, sarcastic, or coy. It’s just fucking absolutely nothing more than shitty Jpop with a few rejected riffs and some random douchebag doing “death metal growls” in the background. But I still love it. (I may have brain damage.)

Actually, why am I defending this? It’s fucking awesome and if you don’t enjoy it, then…uh…sorry for wasting your time? I guess? (Also, my defense sucks and I’m pretty sure Baby Metal will be a gateweay to real metal for exactly no one.)

Holy fuck, I love red pandas. I would try to fuck one of them if I hadn’t just gotten done training all of them to attack naked nut sacks. I am my own undoing!

This is for Islander’s spank material.

Okay, you know who these fine young things are, right? Islander featured them in a post back in April. And, holy fuck, it was impressive, right? I mean, just that little girl on the drums alone was enough to make you go, “Hey, she’s got more talent that I’ll ever have. Literally.” Then, the other two are totally ripping stuff up like little demigods. (Also, they can steal your souls through your computer screen. I mean, if you have one. Metal heads, amirite?)

Okay, well, you’ve probably also seen the video I’m gonna stick below, but even if you have, it’s worth watching again. All of it. I love the end, when the crowd goes fucking wild, giving them every goddamn prop they deserve. (Which, by the way, is all of them. They deserve all the props.)

Also, also: how fucking pimptastic is it when the little dude switches from guitar to violin in the middle of the song? If he makes it to high school without getting ten people (male or female) preggers, I’ll shit myself with surprise. (Previous statement not intended to be a statement of fact.)