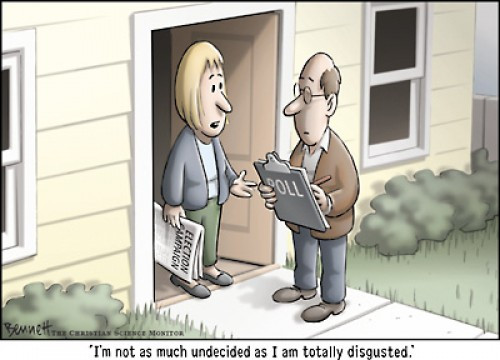 About a week ago, I launched a poll on our site with the idea of getting feedback from readers on some questions that have been floating around in my head for a while, such as whether people would rather get one or two hand jobs from Phro. The poll is now closed, and as promised, I’m now reporting the results.

To be honest, this post is superfluous, since the polling software allowed anyone who filled out the poll to see the cumulative results, but most of you have probably forgotten about the poll anyway, so what the hell.

I found some of the results quite surprising, though others confirmed what I already suspected. Some of the results have given me food for thought about possible changes to the site, but since I move even more slowly than the beloved though sinister lorises here at the NCS compound, I don’t think you’ll be seeing any dramatic changes anytime soon.

Before getting to the results, I noticed that we had widely varying participation in the poll, depending on the question. I guess I should be happy that anyone bothered to fill out the poll at all, though many people obviously didn’t answer every question. And of course I have no way of knowing how many people had the attitude of our very own DGR, who apparently checked off every choice on every question, with this helpful comment: “I CHECKED ALL THE ANSWERS WHENEVER I COULD. FUCK YOUR POLL.” I will be docking DGR’s pay beginning tomorrow. So yeah, I make no claim that the poll results have any statistical validity.

I should also note that we got 126 comments on the original post about the poll, and even taking into account that I probably wrote half of them, that’s still got to be close to a record for our site. I got as much out of the comments as I did out of the poll results. They were a lot more entertaining, too. So, anyway, here are the results, with a few thoughts about each one:

And the winner, with 37.13% of the vote, is the panda-raping, elephant-dong thing, handily winning out over getting Phro to write more NCS posts, though people apparently prefer him writing more than leaving their sisters alone. Fortunately, only 5.91% of voters want him to use more polite language, though this is more than the number of people who want one hand job from him.

I’ve alerted the zoos in the Tokyo region to double their guard on the pandas.

This one really surprised me. It turns out that with all the attention I and the other writers pay to Facebook, more than half of the poll respondents (51.61%) just visit the site and look for new posts. I was pretty happy to see that, since we now know that our Facebook page posts only reach about 25% of our Facebook fans.

However, I must say that I’m nervous about the fact that 11.47% of people are in telepathic communication with the lorises. I just need to warn you not to believe what any of them tell you about me, especially not the one with the black ribbons in her hair and the pretty mouth.

My Top 3 favorite genres of metal are (pick up to 3 choices): 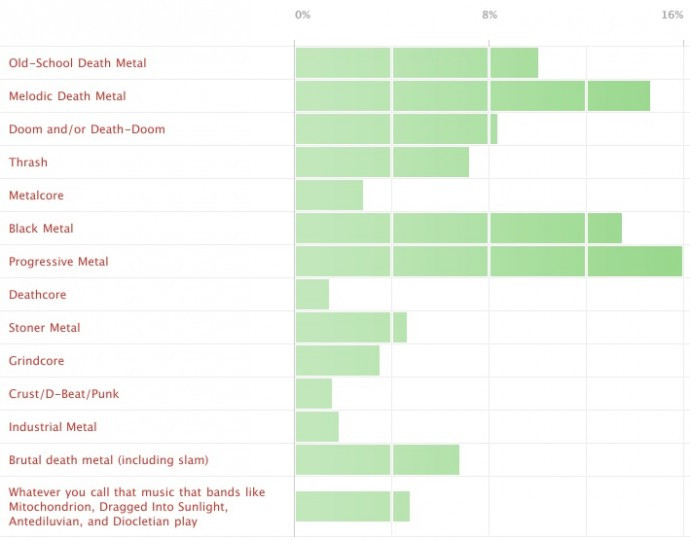 This is another set of answers that surprised me. I sure didn’t expect to see progressive metal with a solid plurality of the votes (16.42%). I was also surprised to see the popularity of brutal death / slam — with more votes than stoner, grind, crust/d-beat, metalcore, and deathcore, and almost tied with thrash.

This question, by the way, got one of the highest participation levels in the poll.

(Pick the answer that comes closest to being true for you). On average, I visit NCS . . .

This was another set of answers that surprised me — and it was a very pleasant surprise. Of the people who responded to this question, almost half (47.03%) visit our site every day, and almost a third (29.66%) stop by every 2 or 3 days.  Very cool.

Should we add DISQUS as an option for you to use in leaving comments?

The vast majority of people obviously don’t really care whether we add DISQUS or not. Of course, I realized too late that I should have asked people to answer this question only if they like to leave comments, so it’s kind of hard for me to know what to make of this. More people who expressed a preference requested DISQUS than those who didn’t.

As one of the commenters pointed out, DISQUS has been criticized in the past because of privacy concerns (see this), and I’m really not eager to facilitate that kind of shit — though I know privacy is a rapidly disappearing concept anyway.

(Select any of the answers below that apply to you). I visit NCS for . . . 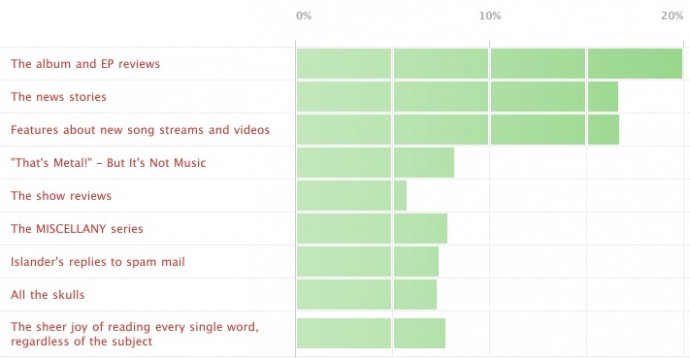 This question got the biggest participation from people who answered the poll. I guessed that the album/EP reviews, news, and features would be the most popular things we do, so no big surprises here. I was happy to see that there’s at least some support for the THAT’S METAL! posts, since I enjoy putting them together. And I clearly need to get off my ass and revive the MISCELLANY series.

Also, everyone who voted for the last choice will get two hand jobs from Phro and a fond wish from me.

NCS doesn’t publish negative reviews, focusing instead on music we can recommend. How do you feel about that?

To be honest, I was looking for some validation here, since I’m pretty strongly wedded to the philosophy behind the way we typically do things. So, it was nice to see 60.44% of respondents supporting the status quo. On the other hand, nearly 40% of respondents said they’d like to see negative reviews as well as positive ones, which is a significant minority.

To be honest, stubborn fuck that I am, this is one area where I’m unlikely to change, regardless of popular demand.

Which of the following statements best represents your view of NCS?

I really appreciate everyone’s honesty here. I can now tell everyone I know that almost 45% of our readers would kill themselves if I stopped blogging, and that even those who could somehow find a reason to live without us still think NCS is the best and greatest metal blog there is.

I’m truly touched by this genuine, unsolicited outpouring of love and support, and I just want to tell each and every one of you that I love and support you, too, and that you are the most intelligent and perceptive judges of literary talent that any writers could ever find in their wildest dreams, and that all of us here at NCS are truly blessed for having found you, though perhaps not as blessed as you are for having found us.