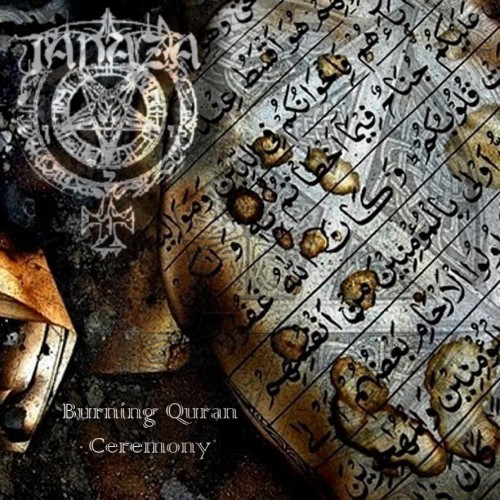 The focus of the article is an example of “art and dissent [intersecting] in a region where dissent can sometimes have deadly consequences,” and specifically on a handful of black metal bands in the Middle East who have re-directed “black metal’s historically anti-Christian ferocity to rail against Islam.” The lead example chosen by Kim was a one-woman Iraqi black-metal band known as Janaza.

The young woman, whose pseudonym is Anahita, was raised in a Muslin home in Baghdad and lost her parents and her younger brother during the Iraq War to a suicide bomb — detonated by a Muslim. She lost her faith, and by her own admission, is full of hate. She uses her music “to show the world that Islam is dangerous” and to demand freedom of speech in a community that seems utterly intolerant of religious dissent. When Grim Kim asked her what would happen to her and her compatriots if religious authorities discovered their actions, she responded: “A simple answer. They would kill me, and kill all of my friends, by cutting off our heads.”

Iraq is certainly not the only country in the world where governmental or religious authorities are intolerant of metal, and we’ve written about other bands from such places in the past (eg, this April 2010 piece on Iran). But Janaza and other bands mentioned in Grim Kim’s article aren’t just risking punishment by playing an extreme form of Western music, they’re directly attacking Islam in places where religious and theocratic authorities react very harshly to blasphemy.

The article made me curious about Janaza’s music, and so I hunted around and found a full stream on The Gauntlet of Janaza’s 2010 five-song demo, Burning Quran Ceremony. For the first test of this MISCELLANY excursion, I decided to listen to a track entitled “Burn the Pages of Quran”.

STOP! HOLD THE PRESSES! WHAT TEH FUCK! Just as I was about to listen to that Janaza track yesterday, I happened upon a Facebook post by Trollfiend (ALSO, WOLVES) indicating that Janaza had been outed as a hoax. I poked around the interhole and found the source of this info:

The evidence assembled in that post isn’t conclusive, but it sure as hell raises some serious doubts about the accuracy of the whole Janaza story. I’m not yet to the point of thinking that Janaza should fuck off and die, but I ain’t listening to the music yet.

This unexpected interruption in my plans left me with a hole to fill in this post, and I did it in a completely random, impulsive way, which is how I do most things. Within minutes after seeing Trollfiend’s post in my FB news feed I saw a link by a different friend (Daniel) to the Bandcamp page of an outfit named Nether Regions . . . so I decided to go with that. What the fuck, it turned out to be an excellent decision. 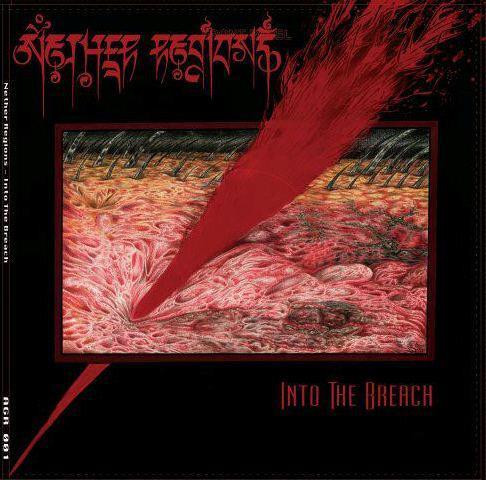 This is a four-man band from Portland, Oregon. In February 2012, they self-released a debut album called Into the Breach in a limited-run CD pressing. North Carolina-based Abnormal Gait Records got into the act and decided to release a vinyl version of the album, with the songs being remixed and remastered for the LP version by Adam Pike (Red Fang, Black Elk) and with slick new cover art being supplied by Brandon Munday and Sam Ford.

How do I know all this? Well, because I got a fuckin’ press release about the vinyl edition back on June 14 AND a link for a promo download of the album that I completely overlooked until searching my e-mail to see if I’d ever gotten anything about Nether Regions. What a happy coincidence.

So, having educated myself a bit about Nether Regions, I decided to just start at the beginning of the album and listen to a song called “Into the Breach/Spanish Werewolves”. Do you ever get completely sold on a band by listening to just one song? Well, that’s exactly what happened to me after listening to this one: SOLD! 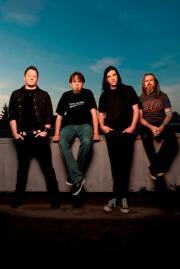 It hits hard right from the start with a phalanx of thunderous, fuzz-heavy groove monsters. The riffing on this song is crushing and cathartic, the drums are irresistible, and there’s an inspired infusion of flamethrower guitar soloing. I’m even digging the sort-of clean, throaty, Matt Pike-ish vocals.

I really couldn’t stop there, so I moved on to the second track, “Do You Live”. The stoner/doom vibe persists in music that begins as a decelerated offering of melodic sludge, which then trades off with segments of up-tempo conflagration with Eastern-influenced melodies. And holy shit, but whoever is playing lead guitar (Colin Stout or Todd Pidcock or both of them) has got some mad skills.

I really had to listen to one more track before moving on, despite the fact that I was already in violation of my MISCELLANY rules. So I skipped to the end and heard the final cut, “Outrun the Sun”. The extended intro is again devoted to an Eastern-influenced melody, subdued and entrancing, with cool guitar and bass interplay and tom-heavy tumbling on the drums. Since this is a 7+ minute closing track, I knew the song would evolve and build, and man, did it. The last three minutes are consumed by a thoroughly head-grabbing instrumental jam that’s heavy as fuck and once again showcases some goddamned incinerating guitar work.

Remember the name Nether Regions — you WILL be hearing more of it. Here’s the album, which can be downloaded or purchased on vinyl via the Bandcamp links below: 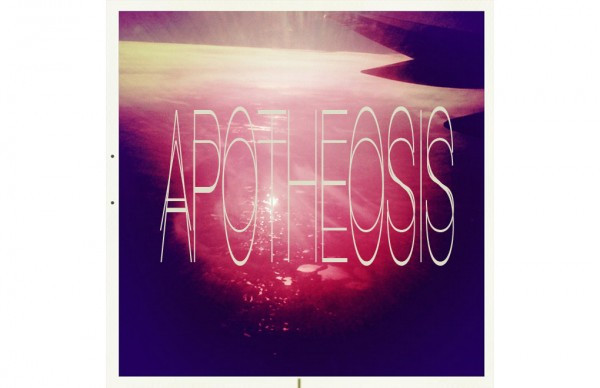 Apotheosis are a two-man band now based in Toledo, Ohio, consisting of guitarist/vocalist Nick Shallcross and drummer/vocalist Mark Reynolds. They started making music together in 1992, with a long break between 2001 and 2008, though they didn’t form Apotheosis until less than three years ago.

I got interested in this band through an e-mail correspondence with Nick Shallcross and then further reading about the band on their Facebook page. The concept that drove Apotheosis was to take music that the duo had created in their earlier years — which they describe as “a melodic sort of prog-doom” — and strip away “the complex arrangements for multiple guitars, vocal melodies and harmonies, extra band members, shredding solos, lyrics, and other luxuries”, leaving “the power that had always been buried” there.

The band’s dual vocals are also almost entirely improvised, born from the energy of the music as it’s performed, and I thought that was intriguing as well.

Apotheosis released their first album earlier this year under the name Husk, and it’s available on Bandcamp as a free download. It consists of five tracks with numbers instead of names, ranging in length from about five minutes to more than seven. 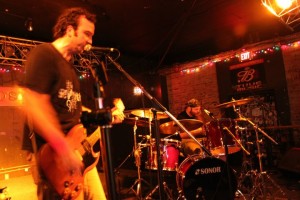 I cheated big-time on my rules, and listened to all of Husk at different times. The band’s description of what they’ve done hits the mark. The music is stripped down to the white of the bone, a suffocating dirge of granite-weighted, fuzzed-out chords that radiate catastrophe. Crashing cymbals and booming drums underline the brute horror of the music. At times, the riffing accelerates into piston-driven chugging, or pounds like a sledgehammer driving coffin nails, or climbs the scale with brief ringing squalls of bleak reverberating melody that give the music character as well as crushing weight.

The layered dual vocals are monstrous, horrific, agonized, anguished, appalling. They reach the abyssal depths of groaning despair and the howling extremes of madness. They’re deeply disturbing and utterly cool.

Although every song includes some genuinely memorable passages, this music, like much of old-school funereal doom, is mainly about the creation of atmosphere, and Apotheosis do a fine job of that. The atmosphere is thick, black, and corrosive. As unrelentingly grim as it is, I found myself hypnotized by what Apotheosis have done. 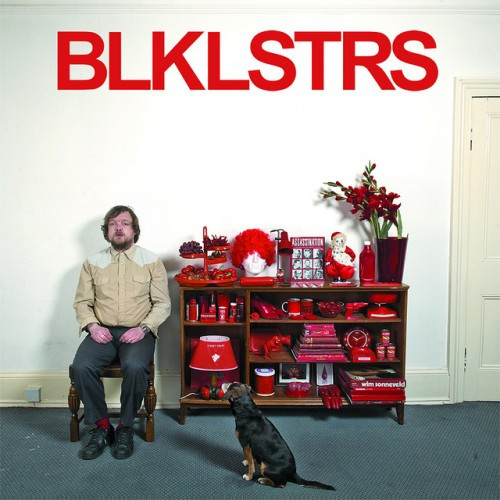 And for the final installment in this game, I checked out Blacklisters. They’re a band from Leeds in the UK who came together in 2008. They released a 7″ called Swords in 2009 and a 2010 EP named Belt Party. In April of 2012, they issued their debut album BLKLSTRS on the Brew record label.

I found out about them through an interview published last week by Nefarious Realm of Pig Destroyer’s Blake Harrison. When asked whether there were any band he would personally like to tour with, Harrison answered, “Yes, we’re all pretty into a UK band called Blacklisters”, and he mentioned them again when listing bands whose music he had been listening to recently.

Well, I’m a devoted Pig Destroyer fan, and I decided to sample Blacklisters’ music for this post based on Harrison’s comments. I decided to hear two songs, both of which are streaming on Bandcamp — “Trickfuck” (which is on the new album) and “Belt Party”.

I guess you’d call this music noise-rock, though I’m certainly no expert in the field. “Trickfuck” is a catchy, mid-paced pounder, with abrasive guitar machinations, thumping bass chords, and methodical percussion. The vocals are a bad acid trip of muttering and throat-scraping shrieks. “Belt Party” steps up the pace, and got my foot tapping, but I confess that I found the crazed vocal proclamations more of an annoyance than an attraction. But here, make up your own minds:

22 Responses to “MISCELLANY NO. 46: JANAZA, NETHER REGIONS, APOTHEOSIS, AND BLACKLISTERS”