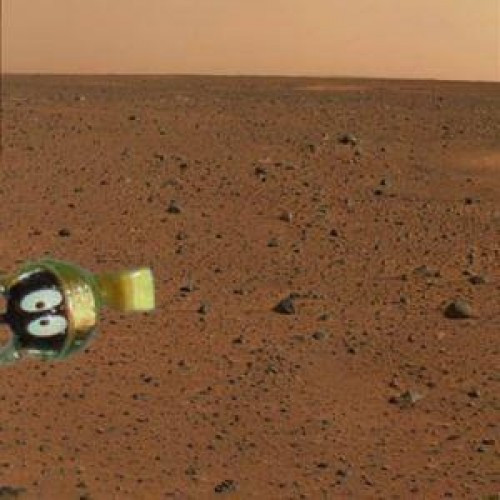 And thank you to George Takei for circulating that stunning photo of the first image to be transmitted back from Mars by the Curisoity rover.

I’ve discovered through our previous posts on things like the discovery of the God Particle and verification of the existence of Dark Matter that many of our readers are science geeks, just as I am. So, I decided that what happened last night on Mars really couldn’t be overlooked on our site — though I nearly overlooked it since I was stuck at my fucking day job most of the weekend with my head up my ass (and thank you, Phro, for making me aware of what I nearly missed).

And yes, NASA successfully landed the Curiosity rover on the surface of Mars at approximately 1:30 a.m. EDT on August 6. The more you know about what this required, the more stunning the achievement becomes.

Curiosity is the size of a small car, weighing about one ton. There’s not enough atmosphere on Mars to allow aerobraking, and Curiosity is too heavy to bring it down to the surface by parachute and air bags. So what did NASA do?

Once the aeroshell separated from the rocket, a giant parachute was used to slow the descent, but just below 6,000 feet above the surface, the parachute was jettisoned and the aeroshell began firing its own rockets to slow the descent further. But they couldn’t use rockets all the way to the surface because those eventually would have kicked up a shitload of dust, throwing rocks and other debris back up into the rover’s instrumentation. So they invented the Sky Crane.

According to this article, here’s how it worked:

“When the craft is close to the surface, descent stage releases the rover and lowers it down a 25 foot tether. By deploying Curiosity from this distance, the lander’s engines can continue to brake the craft without creating disruptive dust clouds. The tether drops loose — and Curiosity is free, wheels down, and on the surface.”

Bear in mind (a) that all of this was down through the use of automated systems, and (b) the entire process had never been tested on anything like the conditions on Mars. But amazingly, it worked.

UPDATE: Thanks to NCS reader Bobbie the Hat, I’m updating this post to include an amazing video released by NASA before — BEFORE — the landing of Curiosity, dramatically explaining what had to be accomplished in order to achieve a successful touch-down on the surface. Truly amazing.

Unlike previous Martian rovers, Curiosity’s mission is to gather data for a future manned mission to Mars — something that, if it happens, will likely be an international effort. And wouldn’t that be fucking cool?

I don’t know about you, but I think the failure of the U.S. to follow through more aggressively and consistently on the early achievements of the space program (especially the missions to the Moon) are an abominable shame. I’m not hopeful that the dynamics of the U.S. political system will provide the money necessary for manned missions to Mars in the foreseeable future, even with additional funding by U.S. corporations who see some profit-oriented benefit for themselves. Maybe a joint international effort would make it a reality.

But honestly, I just want it to happen, one way or another. I can’t believe that the destiny of humankind is to squat on this planet (no matter how wondrous it is) for the rest of our existence.

18 Responses to “SEX IN SPACE: CURIOSITY ON MARS”