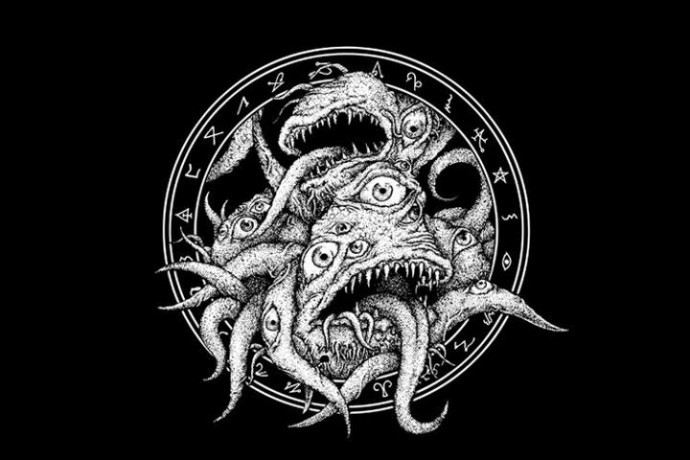 Here are some thoughts, one of which is well-established and the rest of which are just assertions based mainly on my own observations:

–  Across all genres of music, CD sales have declined drastically over the last decade (well-proven)

–  Production and sale of vinyl records are on the rise, at least in the world of metal

–  Album art (as opposed, for example, to photos of the artists) is more prevalent in metal than in any other genre of music

–  At least among metalheads, album art is still important, and is a significant part of what attracts listeners to new music, even when listeners are only buying digital downloads instead of physical formats

I really do think it’s undeniable that album art is a vital part of metal culture. How much it has to do with a band’s success in selling/distributing their music I really don’t know — maybe I just hope it’s true, because I love metal album art and I want it to continue. But my guess is that bands who neglect the importance of album art are hampering their success in attracting listeners, building their own identity/”mystique”, and amassing a fan following.

Obviously, if a band’s music sucks, that will eventually prove troublesome, even if the album cover is amazing. But the big challenge is to get people to give your music a chance in the first place. You can be the greatest thing since the flush toilet, and if no one listens, what’s the point?

I’ve asserted these opinions elsewhere on this site — and it’s obvious that we regularly devote a lot of space to metal art. But I’m thinking about these topics all over again because of a slew of cool artwork that I’ve seen recently around a Vancouver metal band named Auroch.

Fittingly, I first paid attention to Auroch (and posted about them here) because I saw this fucktastic album cover by Danille Gauvin for From Forgotten Worlds, an album due for release on August 28. 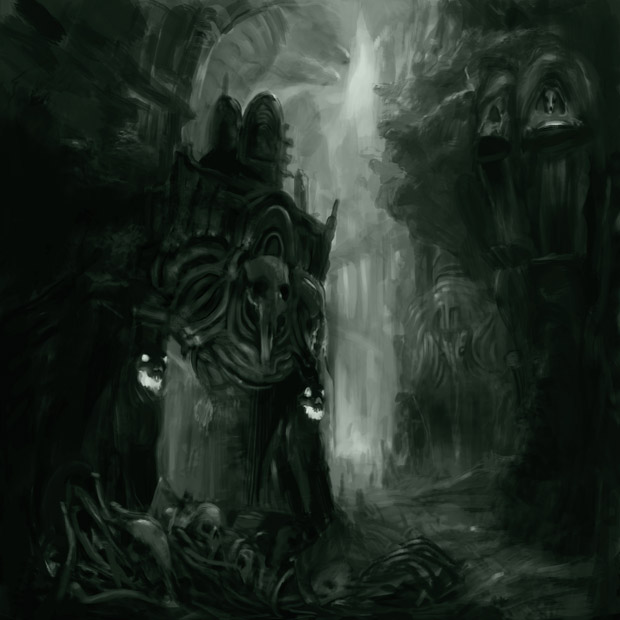 Even more recently, I saw another creation by Danille Gauvin for From Forgotten Worlds. According to a FB post by Auroch, this will accompany a track called “Slaves To A Flame Undying” — could it be that the band plan to accompany each song with a different piece of artwork? 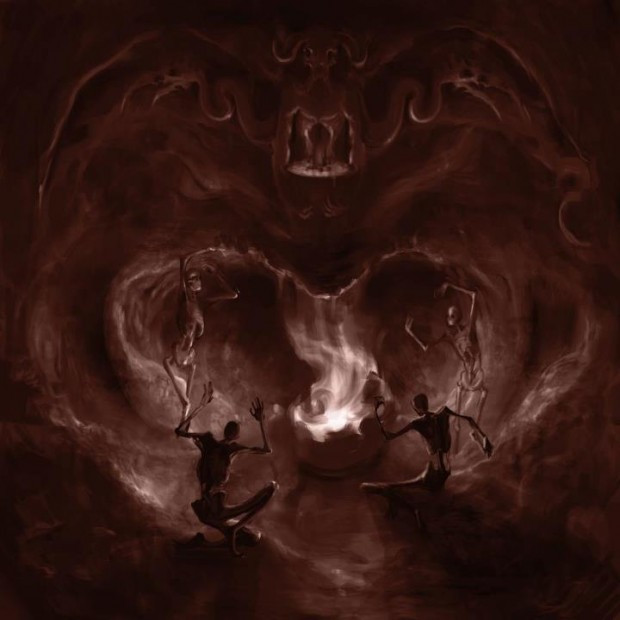 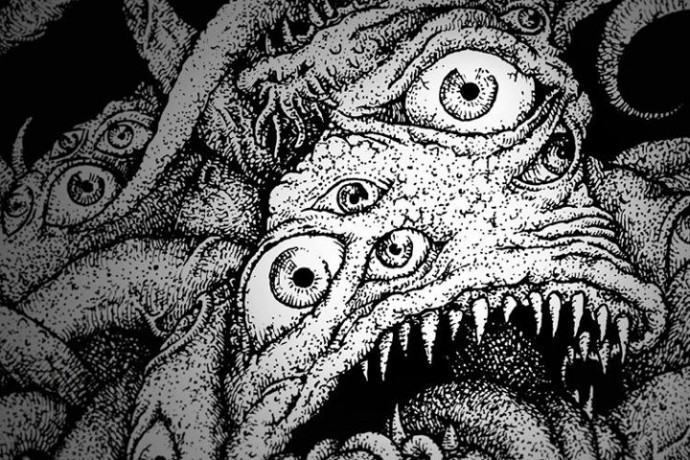 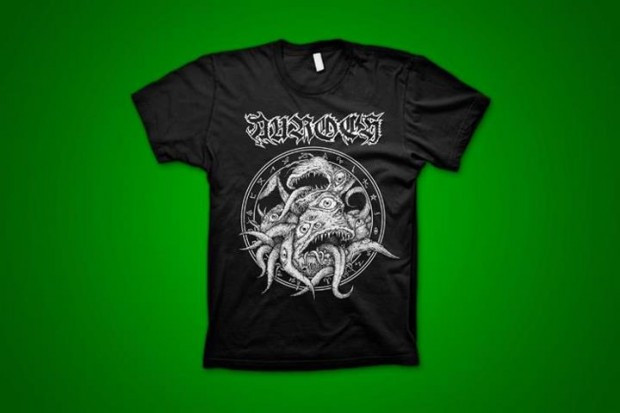 I want this shirt in the worst possible way. Unfortunately, Auroch just returned from touring, and the stock is low, but maybe if demand is strong enough they will make more. You can pester them about that via this address: aurochband@hotmail.com

I’m not finished yet. Check out this design for the poster for said tour, also created by the killer Jeremy Hannigan — wonderfully detailed, Lovecraftian imagery: 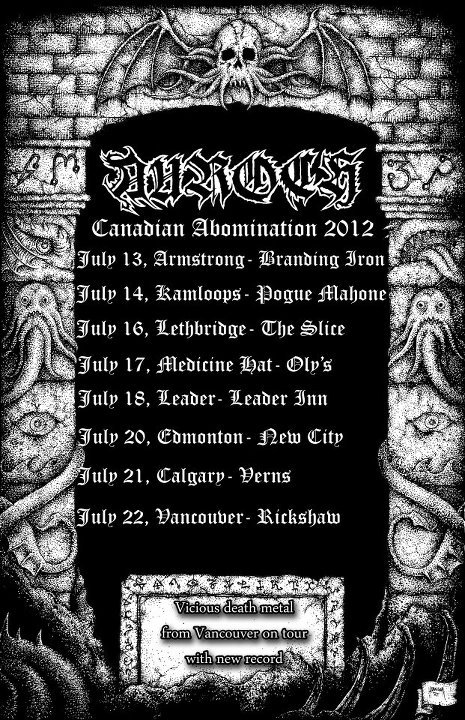 Oh hell, while I’m thinking about Jeremy Hannigan, here’s a detail from the cover piece he created for another horrific Vancouver death metal band, Mitochondrion (we featured this album cover in a post back in February):

I’m still not finished. Here’s a detail from the design for yet another Auroch shirt (forthcoming), which is based on another song from the new album called “Fleshless Ascension (Paths of Dawn)”. This time the artist is Benjamin Vierling: 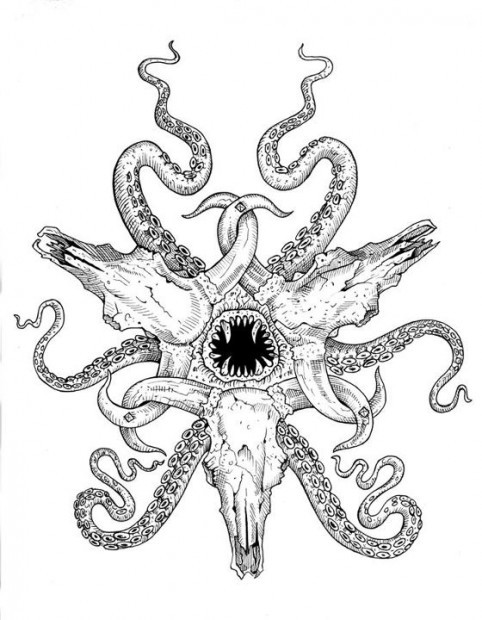 This is also extremely cool. I’m looking forward to seeing what the completed shirt looks like.

And no, I’m still not done. In addition to that album I’ve been mentioning, Auroch also have a split coming out with a band named VadimVon, which will be appearing on East Coast dates this September/October in the North American tour of Morbid Angel, Dark Funeral, and Grave. The split is entitled In Extolation of Death, and this is the cover: 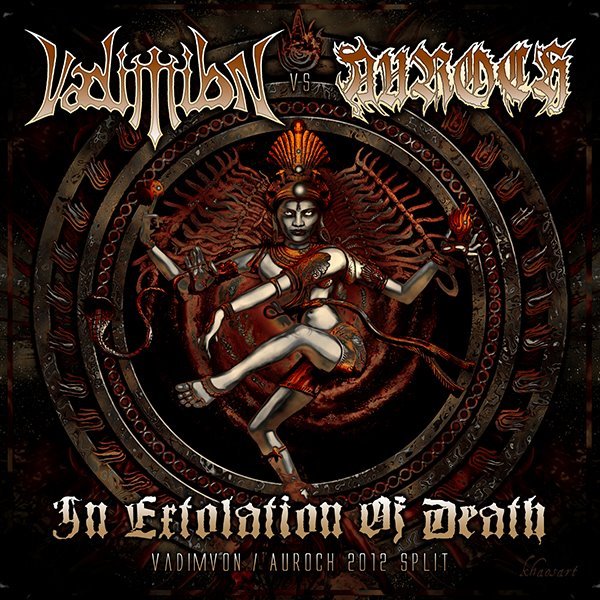 It will include tracks from both band’s forthcoming albums and will be distributed in limited quantities by VadimVon while on that tour. At this point, I’m not sure whether there will also be other ways to get it. I’m also not sure who the artist is, but once I find out, I’ll add an update.

Okay, that’s it for the artwork. I picked Auroch to illustrate a point about the importance of album art, because I happened to see all this stuff on their FB page while browsing recently. Of course, many other bands (even unsigned ones like Auroch) are paying similarly careful attention to dressing up their music with powerful visuals that suit the music.

And speaking of music, here are two songs from Auroch’s forthcoming album — which is available for pre-order through their Bandcamp page (here). The album version of “Slaves . . .” will probably be streaming soon, and when that happens I’ll put it up here, too.

14 Responses to “METAL AND ART (AND AUROCH)”