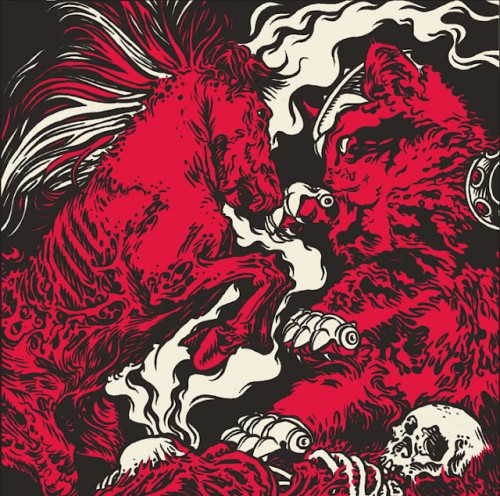 That eye-catching cover art depicts an epic battle in the making, the zombie hell horse and the ferocious battle cat about to throw down. Hooves vs. claws (though it looks like the cat is trying to even the score by wearing the cat equivalent of brass knuckles — cats are ruthless when it comes to horse fighting).

The artwork (by Glenno) graces the cover of a split release by Hot Graves of Gainesville, Florida and Whitehorse from Melbourne, Australia. I was introduced to Hot Graves when they released their 2011 album Knights In White Phosphorus and it was featured in a guest NCS post by SurgicalBrute (here). He described their music as “crusty blackened thrash” and recommended them to fans of Possessed, Hell Hammer, and Sodom. I’ve been following them ever since.

Whitehorse, on the other hand, is a new discovery for me. They’ve put out two albums (the most recent of which was last year’s Progression), plus EPs and numerous splits. I’ll be following them now, too.

Hot Graves contributes two tracks to this split. “This Is For You” and “MetalBlaster”. The music sounds like mad scientists mixed thrash, punk, and d-beat, cooked it in whatever makes metal black,  and then spun it in a centrifuge at high speed until it exploded and spattered the walls with filth. It’s mainly fast, abrasively raw, and smokin’ hot. It’s the music of a demon moshpit at a dive bar in Hell.

The Whitehorse song is a different breed of monster. “Blood Sick” moves at a glacial pace, with the grinding weight of jagged boulders caught in an ice flow, or some sludge-filled battle tank crunching the bones of enemy combatants beneath its treads.

Titanic fuzzed-out riffs and skull-caving drum beats hammer away relentlessly, pierced here and there by the drilling sounds of a tremolo’d solo. The vocals are either cavernous and otherworldly or shrieking and otherworldly. It’s a vivid contrast with the Hot Graves tracks but a very nice complement to them as well.

Get ready to get filthy:

Hot Graves and Satanik Recordings are offering the split in a variety of bundles, both on vinyl and as a digital download, and you can visit this Bandcamp page or this BigCartel page to check out the options. 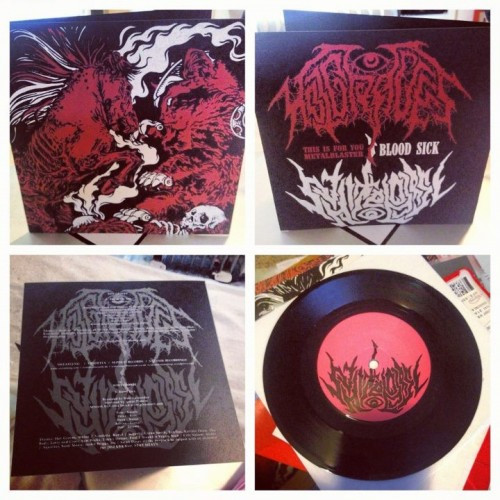