Here’s a quick round-up of new things that caught my eye this morning.

I’m very fucking stoked for the new Early Graves album, Red Horse, which will be out October 30 on No Sleep Records. The title track debuted at the end of August, and I included it in this feature. Now, NPR has premiered a second song — “Pure Hell”.

According to NPR, the band’s new vocalist John Strachan (Funeral Pyre) wrote the song for Makh Daniels, Early Graves’ original vocalist who tragically died in a van accident a little more than two years ago: “He always had that pure hell back patch. So I wrote this for him and the way he lived.”

The song title has a second meaning, too: Sonically, it’s pure hell, too — an explosive, violent, smoking-hot rush of grindcore insanity with a massive, skull-crushing breakdown in the back half. Go HERE to get smashed by this music.

As swan songs go, the fourth and final album by this band — Danza IIII: The Alpha – The Omega— is shaping up to be a winner. It’s coming on October 23 via Black Market Activities. We featured the first publicly released track, “You Won’t”, near the end of August (here), and today brings us a second one.

This song, which was premiered today by Alternative Press, is the title track, and it features guest vocals by Phil Bozeman of Whitechapel and Alex Erian of Obey the Brave and Despised Icon. It’s nuts — screaming, spacey, pneumatic, at risk of coming apart at the seams, but catchy at the same time. And all those vocalists jumping into this hot stew make it even spicier. Check it out: 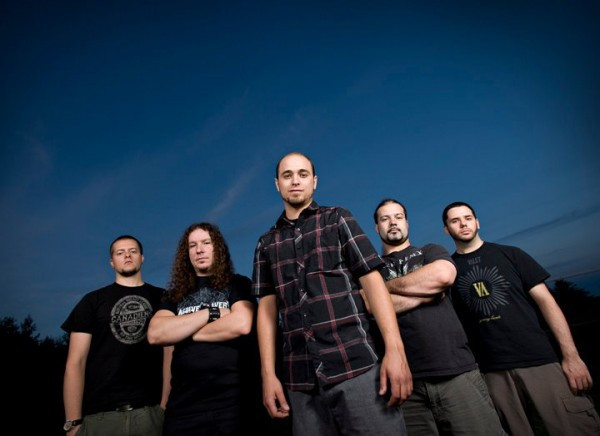 Archons is a new name to me. They’re based in Quebec, Canada, and produced a debut album in 2008 by the name of The Consequences of Silence. They’re now working on a second album, and thanks to an e-mail from DGR I learned that they’ve just uploaded a demo version of a new song called “The Slumber”, which I’m really enjoying.

It’s a souped-up, pedal-to-the-floor burst of melodic death metal. When DGR e-mailed me about the song, he recalled a comment left on a post about the band’s first album at The Number of the Blog comparing them to a combination of Arch Enemy, Dark Tranquillity, and Arsis. See what you think (the band’s Facebook page is here):