(After a bit of a hiatus, TheMadIsraeli reappears with this review of the new album by Ex Deo.)

Whoever thought Roman battle metal would actually be a thing?

I certainly didn’t.  I remember seeing the video for Ex Deo’s “The Final War (The Battle of Actium)” and had three thoughts.  This is one of the most well-done music videos I’ve ever seen, why are all the dudes from Kataklysm producing music better than Kataklysm, and where can I acquire this masterpiece!?

So yeah, Romulus was a pretty sweet album although it did start to drag a bit at the end.  I didn’t really fault them for this, it was a new idea and they were trying something different.  Now we have the band’s sophomore album Caligvla.  I’ve eagerly anticipated this just to see how Ex Deo’s sound would manifest itself after coming into full fruition, and I’m quite enjoying the result.

For the uninitiated, Ex Deo play a style of imperialistically charged melodic death metal with appropriate ethnic instrumentation to capture the spirit and the chaos of Rome at its most bloody.  The most peculiar part of this band, however, is the fact that they are all of Kataklysm, plus one other member.  This is odd for me, considering that if I had to pick a Canadian band who couldn’t possibly bore me more, it would be Kataklysm (although the first three albums did hit a sweet spot with me). 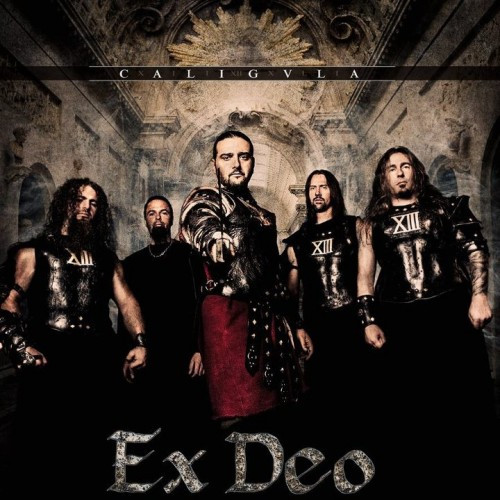 Churning, low-tuned guitars, melodic death metal harmonies, black metal grandiosity, and tremolo-picked riffing combined with sweeping strings and other orchestration turn Caligvla into a massive, bone-shattering hammer blow to your ribs from which you won’t soon recover.  The music typically isn’t fast. Instead, the band prefer a Hypocrisy-style mid-paced groove that’s unrelenting with a good deal of consuming atmosphere. I have to say, that’s probably for the best because I can’t imagine the particular mood on this album being conveyed any other way.

The album’s subject matter, the story of Caligula himself, is a pretty metal topic and is conveyed well in the really odd half-lyrical prose, half story-telling style that vocalist Maurizo Iacono uses in Ex Deo’s music.  His powerful voice booms and snarls, conveying the insanity of Caligula exceptionally well.  The riffs and melodies are all very regal sounding.  You can imagine yourself standing amongst great Roman architecture as it falls to decay and ruin around you.

I will add that the mix on this album is killer.  It’s swollen, massive, and ambient in a manner befitting the music and its subject matter.

Overall, Caligvla is a powerful slab of melodic death metal.  I recommend that you check it out. It’s available now on Napalm Records.