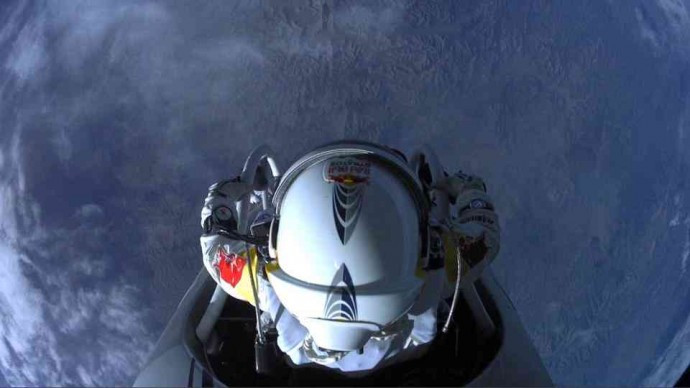 In one of our THAT’S METAL! posts back in early August (here), we included an item about the plans of Austrian daredevil Felix Baumgartner (a/k/a “Fearless Felix”) to make a parachute jump from a height of 120,000 feet and break the sound barrier with his body as he was in free-fall. The project, called Stratos, was being funded by Red Bull. And earlier today, Fearless Felix achieved his goal.

He ascended 24 miles into the sky via a gigantic balloon (55 stories tall) filled with 30 million cubic feet of helium and then jumped — from a height of 128,000 feet above the Earth, reaching a top speed of 833.9 mph. That amounts to Mach 1.24, which is faster than the speed of sound. No one has ever reached that speed wearing only a high-tech suit.

In one of those coincidences of history, Baumgartner did this 65 years to the day — Oct. 14, 1947 — after pilot Chuck Yaeger (of “The Right Stuff” fame) broke the sound barrier in an aircraft. If it had been me 128,000 feet up, looking down at the planet through an open door, my final words would have been “FUCK THIS!  I’VE CHANGED MY FREAKIN’ MIND!” Instead, Baumgartner’s words before he took the plunge were these:

“Sometimes you have to go really high to see how small you are.” 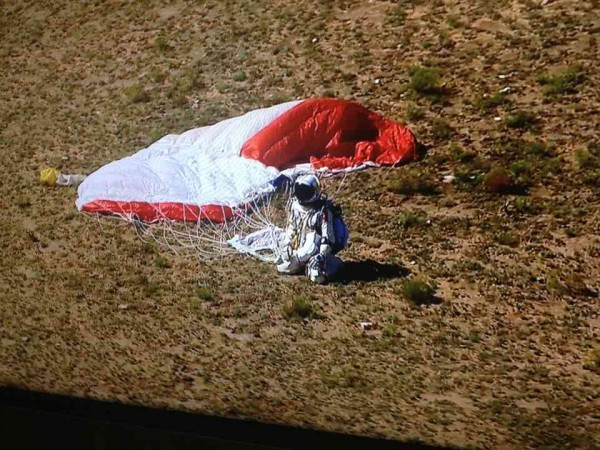 During the descent, Baumgartner could be seen spinning wildly, apparently out of control — something that could have led to a loss of consciousness. I’m close to losing consciousness just thinking about this shit. Fortunately, Baumgartner got his shit together and completed the dive without vaporizing himself on impact.

Official time for the free fall: 4:22

Total time from jump-off to landing: Just over 9 minutes.

13 Responses to ““THAT’S METAL!” – BUT IT’S NOT MUSIC: STRATOS SUCCESS FOR FELIX BAUMGARTNER”