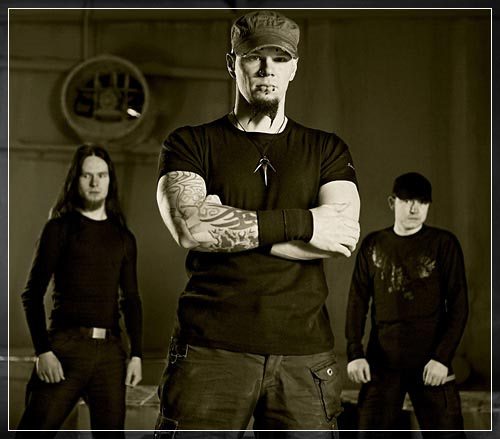 Such an odd choice, but one which works perfectly, taking the darkly gothic atmosphere of the original and replacing its more pop orientation with some heavy metal riffage and a meaty drumming backbone. The vocal interplay is also sublime, the predominant clean croons matched with a bullish, anguished growl from Tuomas Saukkonen.

Unexpected indeed, but seemingly perfectly written for translation into Pain’s signature style, the sci-fi symphony of the song is empowered by a thrusting, chugging display of electro-industrial guitars and booming drums, carving out a slice of disaffected, dystopian melody and power.

Only just released on a split with Bosse De Nage, and in fact the primer for this little piece, not only is Deafheaven’s selection of a Mogwai cover entirely unexpected (but entirely appropriate), but it’s also a hugely unexpected triumph, managing to make the melancholy original seem positively upbeat by comparison.

That’s right, earthy, proggy folk-influenced black metal overlords Kroda recorded a cover of the sci-fi obsessed masters of melodic death metal Hypocrisy. And they made it an instrumental. And it works really well, taking the original song in a wholly different direction and giving the melodies and mood more chance to really breathe.

OCEANS OF SADNESS – THEM BONES (ALICE IN CHAINS COVER)

Not so much unexpected, as it is a cover that features some truly unexpected elements, not least the heavy piano work and the genius decision to have the song’s iconic solo reproduced on violin, of all things. These changes are striking, yet the song itself changes very little, such is its recognisable status these days. The OoS boys just give it a twist and a shake to produce their own signature cocktail.

It’s been covered before at NCS but this is still an inspired choice.

7 Responses to “FIVE OF MY FAVOURITE . . .UNEXPECTED COVERS”