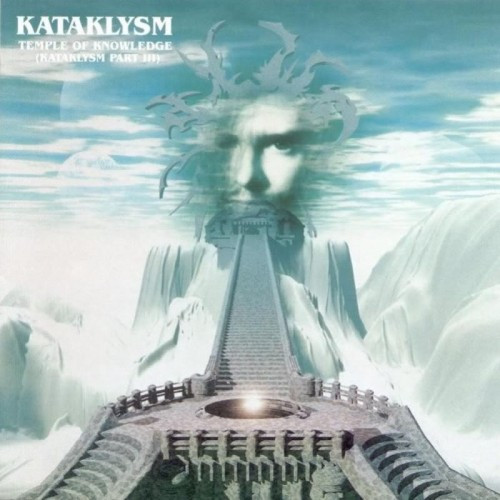 (In this post, TheMadIsraeli continues his reconsideration of the music of Kataklysm. To see what this is all about, check out his introduction to the series here.)

Temple Of Knowledge (Kataklysm Part III) (1996) is a fucking intense low tuned flesh stripping cacophony of almost demonic overflow that you either love or hate. There are reasons to dislike this album for sure. The mix, while well rounded on the frequency front, kind of blows. It isn’t very loud; the guitars, while sludgy, don’t have a lot of life to them; and Houde’s vocal phrasing is kind of off the wall with extremely mixed results. The style on this album is very reminiscent of the feral hyperblast insanity contained on The Mystical Gate of Reincarnation, but taken to a whole new level.

The drummer on this particular album is also worthy of note. Nick Miller (who as far as I can gather only played on this album) has a really intense style. If he’s not blasting or grinding the grooves he does have a jazz fusion technical style attack that makes even the more reserved moments on this album froth at the mouth.

This album also cements what would become part of Kataklysm’s identity from here on — tuning their guitars down to B. While I will admit that the songwriting on Temple Of Knowledge is sketchy, what can’t be denied is that, so far in my Kataklysm listening, this is the best album on the guitar front. Jean Dagenais writes some downright sinister stuff this time around, blending styles of melodic death metal, tech death, black metal, grindcore, and even a bit of hardcore during the groovier parts.

Despite the fact some of the vocal phrasing on this album feels downright silly or just plain pushing it, Houde sounds as fucking nuts as ever. Maybe his manic vocal phrasing was meant to put added emphasis on his particular vocal style.

Temple Of Knowledge is my favorite album by Kataklysm up to this point in my chronological journey through their work. It’s so utterly unrelenting, fucked up, and done with utter conviction. It perfectly infuses not only moments of melody but also moments of pure undiluted butchery.