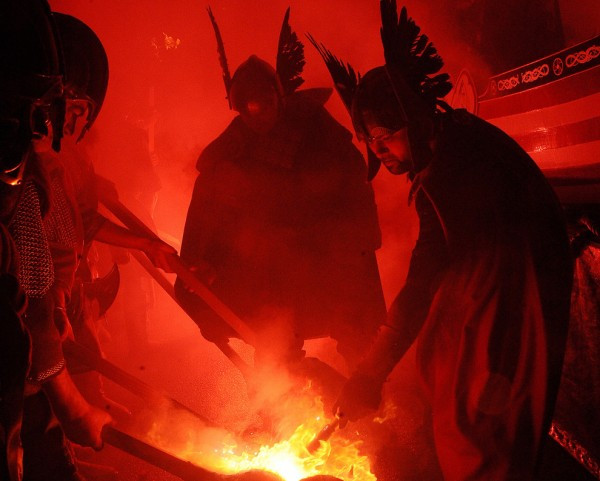 (Our trollish  friend Trollfiend has emerged from his lair at ALSO, WOLVES and delivers this year-end list.)

One of the things I like about folk metal is that it seems to be largely free of kvlt haters.  You’ll rarely if ever hear someone slag on a band as not being ‘true’ folk metal.  That may be in part because no one can really seem to settle on a definition of the genre; quite a few people suggest that it’s not a genre at all.  But assuming for the nonce that those people are a) asshats and b) wrong, I think it’s safe to say that “metal played with or featuring folk or traditional rhythms and/or instruments” probably covers the spectrum pretty well. In fact it’s a damn loose definition; by those criteria I could easily call Nile a ‘folk metal’ band.

Of course, that’s a lack of kvlt haters within the genre.  Plenty of people outside the genre slag on folk metal all the time, probably because it’s not BRUTAL enough for them.  But that’s okay; not everyone likes the same shit, and if all you care about is BRUTAL, you can look at pretty much all the other “best of” or “top 10” lists that have cropped up everywhere like rancid boils.  I can save you the trouble of slogging through all of those lists, though, because they all say Pig Destroyer.

No, what I’m about to offer you is my baker’s dozen of the best folk metal albums of 2012 as chosen by me, the guy who likes this kind of shit.  That makes me an expert.  Also, because people seem to think folk metal is a fad that died out in 2009 (or should have) I am largely populating this list with new, newish, or up-and-coming bands just to make the point that it hasn’t gone away and is going to stick around like herpes, i.e., whether you want it to or not.  And it will probably itch like a motherfucker.  So you won’t see Enslaved’s RIITIIR or Korpiklaani’s Manala or Eluveitie’s Helvetios on here, which is fine, because I’m sure they’ll be covered elsewhere.

These Icelandic warriors are about as Viking as you can get without actually traveling back in time to pillage fishing villages.  Börn Loka is their second album, and it is a frozen slush of thrash, death, chants, proper Viking brutality, and poetry.  Yes, fucking poetry.  But not just any poetry, oh no: Old Norse poetry.  That shit is complicated, yo.  This kind of care for song construction may be lost on a lot of us non-Vikings, but it comes through if you pay attention.  My official rating: Viking As Fuck.

NIBURTA – SCREAMS FROM THE EAST

Anyone who knows me or my website knows that I flog the ever-living shit out of this weird Balkanic blend of folk and metalcore (or something).  Whatever it is, the shit works, and Niburta recently released their official debut on Nail Records.  Niburta heard you say “what? You can’t put throat singing and jaw harp into a metal song!” and told you to fuck right off because they do what they want.  Screams shows a refining and cleaning-up of their sound but they are still as batshit nuts as they were before.

Another Hungarian band, and one of the few on this list that isn’t a newcomer (relatively speaking).  This might be a stretch for NCS; I know they have a hardline stance around here on clean-sung vocals, but I’m gambling on the fact that no one will actually read this list to let me sneak this one in here.  Laura Binder and András Ficzek trade off on the clean parts, but although Ms. Binder has an absolutely feral beast-growl, it seems to be lacking on this album.  Still, it’s infectious and frenzied and the band seems to have discovered that they can riff as well as folk.

THEUDHO – WHEN ICE CROWNS THE EARTH

I have been eagerly awaiting this album for almost a year now, and I finally managed to get my grubby Trollpaws on it.  It’s raw, savage, harsh and pagan. Yeah, “folk metal” isn’t brutal.  Okay maybe this isn’t as brutal as Pig Destroyer’s newest, but it’s pretty fucking heavy and could probably beat up Amon Amarth in a dark alley somewhere. These Belgian lads have also been around for a while and they keep getting more Viking As Fuck.

There seems to be a trend lately for VILT metal bands coming out of countries that are notably not Scandinavian.  This South African band of heathens still manages to bash out some decent melodic metal with some pretty acidic vocal howls and good old fashioned Vikingness.  Vikingosity? Fucked if I know.  What I do know is that this album has gone into heavy rotation on my playlist, which nine times out of ten is enough for me to laud it as “best of the year”.

Do you like Trollfest? Finntroll? Other bands with “troll” in their name? Accordions? Drinking? Then Troldhaugen is for you.  These guys are from Australia…apparently Australia has trolls too.  Who knew?  Note: this is exactly the sort of thing that makes your kvlt elitists cringe and wet their beds at night.  It’s not grim, frostbitten, tr00, or any other SRS BSNS you want out of your metal.  Suck it, I’m gonna go drink some beers.

Continuing our non-Scandinavian Viking-but-not-really trend, here is Incursed from Spain.  They’re at least a little closer than South Africa, but still not actual Vikings.  They are kinda melodic, kinda old school, and kinda black, all of which get my drinking horn of approval.  Also, apparently Fimbulwinter is like 1000x worse than regular winter because it has Fimbuls, so let’s hope that never happens.  Does it snow in Spain?

The Samans are a Chinese folk/industrial band and their Whalesong EP is a Moby Dick tribute/concept album.  Wait, come back! I didn’t mean it!  Well, okay, I did.  I’m not sure why they are billing themselves (?) as “industrial” but you’re cool with all the other stuff, right? Who doesn’t love the Dick? I know I do.  Especially if it’s white and bigger than a whaling skiff.  The Samans might be a hard sell despite their quality death growl, but their oddly ambient sound is definitely worth checking out.

FANGORN – WHERE THE TALES LIVE ON

If I could be said to have a favorite breed of folk metal, I would definitely say Russian folk metal is it.  I’m not sure what it is…the sound is as varied as from any land, and the Russians don’t really do anything different…oh wait, yes they do.  Fucks? Not given by the Russians.  They will happily switch between lighthearted drinking songs laced with concertina to demon wolf howling over the plains of Siberia.  Something about the national character breeds a certain kind of hardy flaming-balled metalness that just isn’t found anywhere else. And sometimes they’re a bit goofy, but fucks are still not given.

Fortid gets back into the black end of the folking spectrum, and they’re pretty damn good at it.  Perhaps unsurprisingly they are from Norway; or at least now that they have gone from a solo project to a group of tour-ready musicians they sort of collect there (the founder of the band is Icelandic as near as I can tell).  Don’t let the uninspired album title fool you – Fortid is meticulous, thoughtful, and as ice cold as troll blood.

This is another band that has been around for a while.  Mixing everything from raw black metal to ambient, acoustic, Teutonic clean chanting, and traditional instruments, Finsterforst probably belongs in a camp with bands like Manegarm and Thyrfing.  Rastlos finds them trying their hand at epic songwriting; they aren’t yet at the Moonsorrow “3 songs, 6 hours of music” level, but they manage to keep it interesting over a decent length.

Another German band with a penchant for atmosphere and drama.  This is probably as close as I got to old-timey black metal this year.  Vinterforest would probably best be classified as “pagan” metal, at least lyrically.  I’m gonna go out on a limb and say that I didn’t hear any traditional instruments or folk rhythms on this album and that they’re probably just good ol’ BM.  And I’m okay with that.

I know you were all horribly disappointed that I left TR00 FOLK METULL behind for a couple of bands there, so here you go: a Danish “heavy folk” band that is all peppy and cheerful and not black at all.  Nanna Barslev has a dramatic (dare I say “epic”?) voice, and if you liked the Dalriada track up there I’m thinking you’ll probably dig this one too.  Her throat-coring harshes are rare but worth the wait.

SAND AURA – ELEGY OF THE ORIENT

This is a weird one.  Is it prog? Avant garde? Melodeath? New-Age-y folk? All of the above?  Sand Aura are from Egypt, so maybe their brains are baked from the heat.  I honestly don’t much care; this delectable soup of musical styles heavily influenced by Middle Eastern rhythms is atmospheric, heavy, and ball-garglingly enjoyable.  Think Orphaned Land with occasional death growls.

Honorable Mention: SHANGREN. The new album was supposed to be out this year.  We’re waiting, Mr. Ong. Not all that patiently, I might add.

EDITOR’S NOTE: If you want to pee yourself from laughing too hard (and who doesn’t enjoy that?), then listen to the robotic NCS podcast version of this post here: